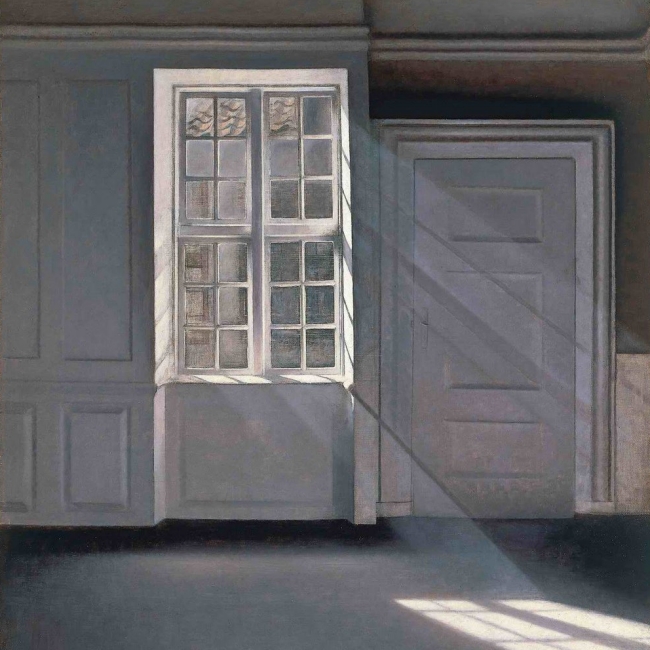 “Dust Motes Dancing in the Sunbeams,” oil on canvas, by Vilhelm Hammershoi, 1900.

She carries his taco tray, and folds up
his walker, leans it against the faux-brick
wall. The lack of oxygen to his brain
while in his mother’s womb causes his arms
to spasm, and his weak legs to buckle.
She was born with an extra chromosome—
something within that everyone first sees.

Twelve bucks between them, they share a soft drink.
Necessity the mother of romance.
He slides over to her side of the booth.
He calls her Honey-dumpling, and reminds
her that she’s beautiful. She wraps her arms
around his neck like he’s Tarzan. They sway
to Prince in this bright room with big windows.

I wait in a fast-food joint for my mechanic to call,
say he’s fixed my brakes, and there’s this guy
in a My Little Pony T-shirt so long it looks like a dress,

who waits for a double cheeseburger and a milkshake,
a brony I want to horsewhip because it’s been five hours,
and my phone lies black-screen and half-dead, and I worry

the employees in their red visors think I’m homeless.
Is this all it takes to buck out of my skull, hoof-kick
others in the chest? I finger-trot around a ukulele

with cat stickers pasted on its body. Who am I to trample
through someone’s dream prairie? Who am I to corral
someone’s happiness, truck it off, boil it down for glue?

My mother’s friend asked if I remembered
any from growing up. I couldn’t say.
It’s true, my mother sold the chest freezer
to replace my broken glasses, her love

I never questioned, but that’s no answer.
There were excursions for ice cream, and trips
to the family farm where I’d chase chickens
and fear the outhouse, but they were tainted

by her drunken squalls, and the unsureness
of which boyfriend it would be to salute
me at the breakfast table. The good times
became peace offerings. She’d bobble

all night from sports bar to neighborhood dive
and when she’d finally slur in at dawn
she’d gift me a day of hooky from school.
Once, she crashed home and snarled her fingers

in my hair, yanked me out of sleep, spitting
to know who spilled the milk, and didn’t wipe
it up, and before a groggy word left
my mouth, she slapped my face. Later, she drove

Joshua Michael Stewart has had poems published in The Massachusetts Review, Rattle, Night Train, and many others. His first full-length collection of poems, Break Every String, was published by Hedgerow Books in 2016. Visit him at joshuamichaelstewart.com.