Three Poems by Kathryn A. Kopple 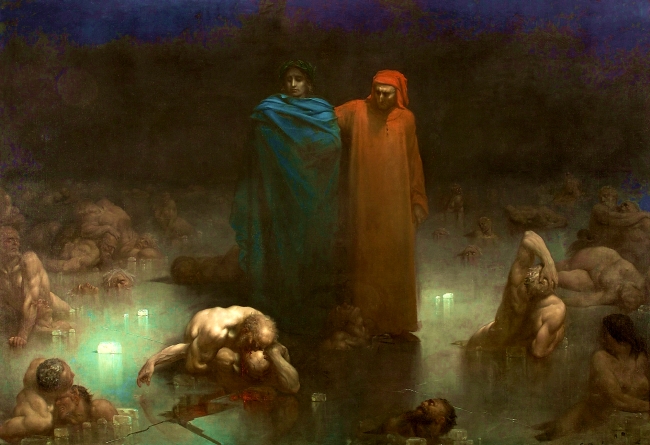 “Dante and Virgil in the Ninth Circle of Hell,” oil on canvas, by Gustave Doré, 1861.

A basketball sits on a rough patch
of sod poised at a tangential angle,
the sun in its summer phase, southerly
in position; a direct hit down here.

Out there, in the yard, in vicious heat
that can only signify I hate you. Die already,
ragged zinnias and dogged roses
darken to matching shades of charcoal.

Humps of yellow tickseed begin to shed.
Blocks of hedges hog whatever they can
of the aquifer. The oaks raise their roots
above pavement and eroded soil.

To look at it the basketball appears
better equipped to handle the climate;
made from strong, lasting materials like
laminate—unlike the general populace.

Hot out there. Do heed the advisory.
Drink plenty of water. Stay inside. Out
there it’s a scorcher, it’s a forgotten past sense
when the word meant to strip of skin.

Until you perceive the extreme loneliness of flannel,
And rub your hands on the paint smacked brick walls,

Until you ponder the sad, square eyes of motels,
And the vinegar streaked sunsets,

When you are at the mercy of soups and kitchens,
And remember the rucksack grandmothers,

When you consider under a microscope the ubiquity of cash registers,
But fail to monitor how one hand washes the other,

And you keep company with the marooned apartment cats,
And share the Purina One and the litter box,

When you understand you will perform a miracle every day,
When you finally get the artistry of lighting a match in strong winds,

When you live the purgatory of a five-story walkup,
When you suffer the pensive handshake of a stuck doorknob,

And survive years and years of emotional defenestration,
And never lose faith in the shamanistic properties of library cards,

And your body treats you like an unwanted tenant,
And you do the best that you can,

Until the stars come home,
Until God knows when.

First published in The Sunflower Collective (2015)

300 million years is quite a record.
If anything can survive mass extinction
it might be the colloquial horse-
shoe crab, as if by any other name
the little beast would repulse the tourists,
the gardeners that spread what remains
of their barnacled shells once ground
into fertilizer, the patients in need
of the next miracle drug.

A living fossil is rare enough,
even if you believe your husband mal-
adaptive or your children an alien
species. Even if her mother called her
boyfriend a freak or his best friend
is a komodo dragon, tongue flicking,
lidded eyes and bad breath. Or
you woke with that primordial angst
you get after a fitful night’s sleep.

Shaped like a shovel, armored
and encamped on the warm sands
of Dewey Beach, the blue blooded
Limulus is time’s own riddle, ancient—
yet in so many ways a novelty.

First published in The Liberal Media Made Me Do It (Lummox Press, 2014)

Kathryn A. Kopple works in Spanish and English. She is the editor of the Latin American section of The Sunflower Collective. She translates for TED in their outsourcing program. She has published original poetry and prose in journals such as The Threepenny Review, Bellevue Literary Review and Oblong. She is the author of Little Velásquez (Mirth Press), a novel set in 15th century Spain.