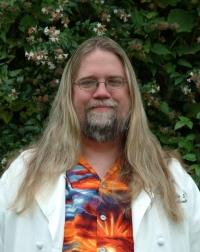 I was browsing the new release shelves of my local library branch when I was ambushed by Last Plane to Heaven. Jay Lake was a well-liked acquaintance of mine, and a good friend of several of my friends, so I knew of his death last June. I hadn’t known this collection was being published. Once I had a moment to reflect, though, I wasn’t terribly surprised. Jay was a man who orchestrated his career (and much of his life) with the finesse of a velvet glove over an iron fist of control. Finding his fingerprints covering a posthumous short story collection is so exactly reflective of his style as to bring tears. Of course I had to read it, and having read it, review it. It is a lovely farewell, and an appropriate epitaph.

The collection is bookended by a forward by Gene Wolfe and an afterword by Jay himself, and each story is introduced by a paragraph from Lake as well. Mr. Wolfe relates a suspicion that the reader of his introduction (and thus presumably the collection) usually avoids short fiction; this struck me as peculiar, then inflammatory, then tongue-in-cheek. This strategy of persuading by provocation is a hallmark of both authors, counter-intuitive but effective. Lake relates how finding and reading a copy of Wolfe’s The Shadow of the Torturer in his college years was the seed that gave him the idea and the drive to be a writer, and Wolfe is a fitting patron saint for Lake, similarly unafraid to offend, in either intent or vocabulary. As a result, both have shown us baroque and uncanny pictures of the future, not always comfortable but certainly compelling.

My acquaintance with Jay began in the middle 2000s. I was the editor-in-chief for the Internet Review of Science Fiction; he and Ruth Nestvold co-authored a monthly column discussing aspects of the field. Later I started following his blog, which I found to be my favorite of all his writing, paradoxically, as he omitted blog posts from his habitual summation of daily word count achieved. His reasoning, as I recall, was he found himself occupying a different head-space when writing fiction; that was his career. The blog posts were record-keeping: diary, craft benchmarks and statistics, and shared items of random interest via his “Link Salad.” We also both attended the Rainforest Writers Retreat, though my social awkwardness combined with his near-constant entourage during non-writing times meant we mostly exchanged hellos, after which I would sit myself down to listen as he held forth. He was always kind, and made sure that I knew he recognized and remembered me—no insignificant thing to someone still getting their writerly bearings.

That attention to detail is present in his writing, and the stories in Last Plane to Heaven are grounded in an abiding love for finding the right word. As is fitting for the summation of a career, the collection takes us down the strange and twisting paths Lake’s stories are wont to explore. Organized by sub-genre, the thirty-two pieces include hard-boiled adventure, space opera, horror, and flat-out experimental strangeness. Some of the works were specific commissions, with strict editorial requirements; others developed more organically. Typical of his exposure of his working process are the pieces of “stunt-writing,” created in full view of a live audience. Other pieces expand the world of his Green trilogy, or give us a glimpse of projects he was unable to complete, like the planned multi-volume Original Destiny, Manifest Sin. His darkly seductive City Imperishable stands with China Mieville’s New Crobuzon as a deeply unsettling yet oddly plausible alternative world, and the city has palpable character and presence. The crew in the eponymous Last Plane to Heaven: A Love Story is rough, hard-bitten and vicious yet Lake makes them and their situation compelling.

The final story is a stark exegesis of his disease titled “The Cancer Catechisms.” It is visceral and heartbreaking, and a painfully accurate though fictionalized autobiography of the procedural hell of major medical treatment. Cancer is an old scourge, and brings with it decades of terror and sorrow which Lake does not shy away from relating. Some details have been changed, but the truth rings clear as he opens his experiences to the reader, much as he did in his blogging. He shares the way his life is slowly taken from him by both the disease and its treatment. He provides the grittiest of details: the isolation and sexual frustration of having his body become toxic to his lover from the chemo, the digestive troubles that leave him dreaming of toilets with soft and comfortable seating and space-age features, the fear and sorrow that come to live in the eyes of his companions, the brain fog that strips him of his ability to write. Spiritual matters receive the same examination, and his atheism remains intact even as he uses the language of religion to express himself. Lake conveys a true sense of fighting with himself to hope for the impossible best while the terror and dismay threaten to overwhelm. The result is a complex, very human piece that is genuinely moving.

If you are new to Jay Lake’s work, Last Plane to Heaven: the Final Collection is an excellent sampler of the breadth and variations of his style and subject. If you are familiar with Jay’s writing, it is a fine showcase for his talents, with the benefit of his commentary on the genesis and logistics of his artistic process. If you happen to fall in the shadow of Mr. Wolfe’s contention, and are only familiar with his novels, this will be like finding an intriguing box of mysterious objects in the depths of an attic, full of possibilities and bits of flotsam and strange clockwork devices. I hope you enjoy going through it as much as I did.