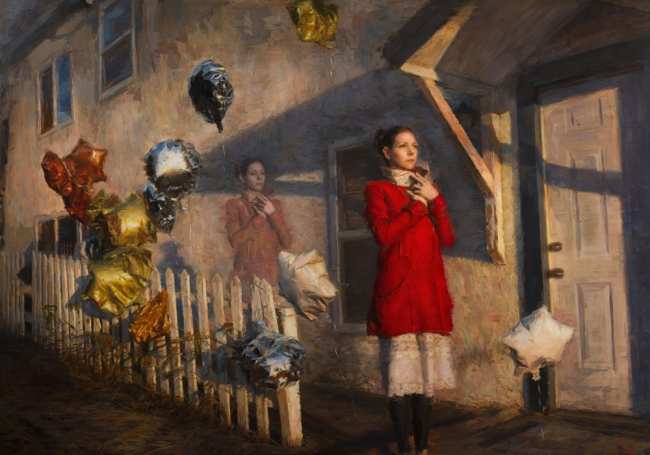 “Apparition,” oil on panel, by Julio Reyes, 2014. Used with permission.

was born the same day as you. The temperature in the Central Valley had dropped to a record low. I scraped the frost off the windshield before I drove myself to the hospital. Your father was passed out in bed and I couldn’t wake him. When I crossed the train tracks, I felt you hurtling toward me. I sped the rest of the way. They rushed me to the delivery room, and there you were, as if you’d been waiting the whole time. The doctor placed you in my arms, told me I was made for having children. In the morning, your grandma brought your father in. He held out the bundle of red roses she bought for me. Later that day, I heard the story from the nurses. It was a girl too, the other baby, wrapped in an old blanket, found frozen in a garbage dumpster. We took you home to the crib we’d set up in the living room. I held you and fed you as I watched the news. Annabelle was her name. She’d been eight pounds, same as you. I still remember her tiny coffin, the small group of mourners, nurses and social workers, huddled over it, their gloved hands held out as if it were a fire that could warm them. In the wind, the elm tree scraped the roof of our house. Your father snored in the bedroom. I wept and a tear fell onto your smooth red face. They never found Annabelle’s mother. Your dad wrecked his yellow Corvette, got arrested and put in jail for three months. You woke me every night screaming. A few weeks after your third birthday, he passed out again and didn’t wake up. After we moved to Arizona, you announced that you hated your name, refused to answer to it anymore. When you were fourteen, I had to rush you to the hospital to have your stomach pumped. Then at seventeen, you kicked me in the face. The police came, and you screamed you wished you were dead as they cuffed you and wrestled you away. I take pills to help me sleep, but every night, I run through alleys, fling open trash bins. I rummage through dirty blankets, uncover tiny blue faces, my hands and feet icy and bleeding. But I can’t remember where I lost you.

“The Other Baby” originally appeared in Permafrost. It was a finalist for the 2016 Lascaux Prize in Flash Fiction.

Jackleen Holton Hookway’s poems and stories have been published in the anthologies The Giant Book of Poetry and Steve Kowit: This Unspeakably Marvelous Life, and have appeared or are forthcoming in Atlanta Review, Bayou, Kestrel, Natural Bridge, North American Review, Rattle, and Sanskrit. In 2014 her poem “Goldfish” won Bellingham Review’s 49th Parallel Poetry Award.