(Why Are So Many of My Friends) Tesla Kooks?

I’ve fallen in with the Tesla crowd. We meet at a crappy Thai restaurant where the best thing on the menu is fake-Thai Jewish chicken soup. Alternatively, we congregate at a Mexican restaurant where the cheese is plastic. We speculate about the waitresses’ abusive lovers or about how many jobs they work. The waitresses are all so tired in these places, exhausted actually. But so am I, tired of voodoo science and conspiracy theory. Sooner or later, over sopapillas or phat thai, we get around to Tesla.

Nicola Tesla, renegade scientist, mystic, showman and icon to the ultra-liberal. At first my ears practically fell off—the theories forced me into a trance state of flabbergasted bemusement. But after a while, it became a struggle not to laugh out loud. Then it became repetitious.

Here is Theory One: The power grid is all a fake. Tesla invented a device that taps the unseen unmeasured power of the Universe, the kinetic ether, and every house is powered with it. All the coal mines, all the generator plants, all the high voltage tension wires, all the creosote-soaked poles, the very line that droops in a festoon on its way to the side of your house—all that is deep cover for the truth. The electricity really originates in a small device that you can hold in your hands. It’s a metal box with a large glass jar and some spinning dials. It’s disguised by a clever label: electric meter, not electrical generator.

But wait! Don’t you think that a few of the 725,000 members of the International Brotherhood of Electrical Workers would have blown the whistle by now? They’ve only perpetuated this lie since 1890, in cahoots with the Overlords. That’s a long time for the workers to keep up an unholy alliance with the rulers. Or don’t you think your local neighborhood unlicensed electrician would have noticed the TV blaring in the house even before the Electric Coop made the line hot to the house? You don’t think he might have mentioned it over a beer down at the tavern? Offered to demonstrate it on his buddy’s house?

Dear friends, this is a testable theory. Just go outside and take your house off the grid. Stop paying that utility bill, run the air conditioning at sixty, leave all the lights on all day, don’t close the refrigerator door. You’re tapping into the infinite power of the universe and it’s free, free, free! Cautionary advice: wear rubber boots and gloves when you cut your house free.

Tesla revealed late in life that we would have levitating machines powered by his universal etherflux. This gives us Theory Two: Tesla invented the flying saucer. Only he turned it over to The Others. Despite the fact that Tesla died impoverished in a residential hotel in New York, he invented and gave away the most magical device invented in millennia of civilization. Right. This is the guy who cashed in every patent as quickly as possible, desperate for money.

Once you believe in a flying saucer, you have the lovely opportunity to surmise who drives it, where it goes, what it does when it arrives and of course, who is oppressed by its godlike futuristic powers. My favorite is that extraterrestrials got the saucer from Tesla and use it to hold us all in a tyrannical bubble. Saucers surround the Earth and cage us clueless human beings in a sphere of invisible power. I’m just a little puzzled how the aliens crossed millions of years of space without the saucers before they acquired the technology from Nicola. And how Mariner got through the prophylactic bubble on the way to Saturn.

Once you believe in a flying saucer, you have the lovely opportunity to surmise who drives it, where it goes, what it does when it arrives and of course, who is oppressed by its godlike futuristic powers.

A second stand-up-and-be-heard theory is: the uberGovernment has the saucers, and that we’ve all seen them on patrol in the sky. The real dilemma we have here is the basic banality and the disorganized, anarchistic tendencies of human organizations. Even the most tyrannical of governments can’t avoid a tiny level of transparency where the truth can glimmer through. To believe in the uberGovernment is to believe in a super North Korea that can dominate billions of people for a couple of hundred years, with no one noticing. No one except whackos with no data, no connections and no hobbies. So maybe it’s not the government with the saucers, maybe it’s the Nazis in Argentina.

And we’re on to Theory Three: Tesla invented particle beam weapons that are in daily use today. In fact, Tesla did like the idea of particle beams (but had no clue about lasers). And he did make plasmas in Colorado that he used for P.T. Barnum effects and for fundraising—it’s called ball lightning, right? And his papers did “disappear,” very legitimately back into Yugoslavia as he desired—so the plasma gun must be in there, all written down. And the big tantalizer is that everyone wants plasma physics to work, for a ton of commercial reasons besides the usual military weaponization.

So, where are the particle beams? Yugoslavia sure didn’t develop anything, not even an economy. If we Americans had them, we’d use them—the U.S. is always in a big hurry to roll out any tech it has, from nuclear weapons, to cluster bombs, EM pulse weapons, stealth technology, 3D copiers that can make M4A rifle parts, and our simple drones. If the Russians had plasma-based weaponry, they’d sell it to the Syrians in a flash, or demand Georgia back with a blackmail demand (and ask for Poland as a bonus). If anyone anywhere used them, we’d record their electrical signature in a half dozen ways. We civilians have far too much technology—we’d iPhone-video something like a death ray screaming off a satellite to scorch a truck-full of terrorists in Kansas.

Someone would blab. And if someone blabbed, he wouldn’t be some hysterical self-promoter with no credentials like Glenn Beck or other radio cultists. He would be a PhD physicist with a hard disc full of data.

I have to ask, what fascinates us about Tesla? We’re so unfair to other scientists. We don’t give Madame Curie a mantle of genius-level prognostication and whisper about her portfolio of atomic secrets. We ignore Pauling, Crick and Watson and don’t invent theories that they secretly created a race of supermen. Richard Feynman fades into physics obscurity in spite of the fact that he speculated and delivered on physical concepts Tesla had no inkling of—and also was more fun on a bar crawl.

Richard Feynman fades into physics obscurity in spite of the fact that he speculated and delivered on physical concepts Tesla had no inkling of—and also was more fun on a bar crawl.

We love Tesla, because he painted himself as the outlaw scientist and we’re outsiders too. Tesla fans are the definition of marginalized citizenry. If Lawrence Livermore Laboratories would do lunch with us, we wouldn’t have to believe in some early-1900s miracle guy. We’d realize that since Tesla’s death in 1943, there has been eighty years worth of science and entire physics libraries full of stuff he never knew. If NASA would do a little power sharing and give us a ride in their new Martian hovercraft, we wouldn’t have to believe in Tesla’s flying stove (another Tesla promise—a flying flivver that resembles a stove, soaring from the East Coast to Colorado non-stop—sorry, it’s so geeky I couldn’t resist sharing). If politicians invited us over in the evening to play parcheesi, we wouldn’t think of them as the masterminds of technical oppression. Instead, we’d pity them.

Like his ball lightning, Tesla remains unstable and immeasurable to us. No wonder we make him our modern Prometheus—and believe he has secretly given us the secrets of all the gadgets we see on the SyFy channel. Tesla held no field sacred where he wouldn’t render an opinion—and a selective sifting of the man’s torrent of words gives us any conspiracy theory we want, any stolen and cloaked weapon we need. Tesla fulfills the need of the marginalized liberal to reveal the depressing world as a simple collection of ingenious intertwined conspiracies. This is so much cleaner than the tawdry, complicated mess our civilizations have made of the world. We like Tesla because he makes it easy for us.

You know, Tesla once said he would soon control the weather. That leads us to the biggest of all conspiracy theories, promised soon in a cultural essay near you. In the meantime, convene in your not-so-good restaurants and high-priced coffee shops. Mutter about world domination and mind control. I’ll see you there. I’ll be in the corner, trying not to laugh, eating the plastic cheese. 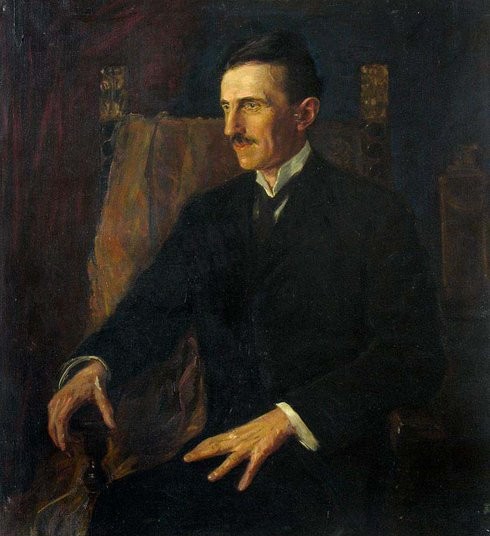 Scott Archer Jones is the author of Jupiter and Gilgamesh: A Novel of Sumeria and Texas, a New Mexico-Arizona Book Award finalist and IPPY bronze medalist; The Big Wheel, released in March 2015; and a rising tide of people washed away, forthcoming from Fomite Press. He edits for The Prague Review and serves as treasurer for the nonprofit Shuter Library, which is always in need of donations.