The Poetry of Paul Celan & the Language of the Selfie 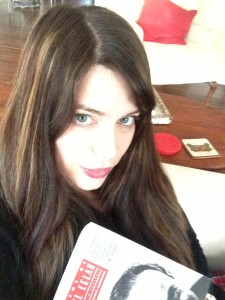 A few weeks ago I was having lunch with my friend Fozzy when our conversation turned to the connection between poetry and lyrics. Fozzy—aka professional baritone Matthew Worth—wondered if I, having recently won a poetry prize, would take a stab at writing some song lyrics. Though Fozzy earned his nickname with his dedication to rotten jokes, this was a serious request, one both intriguing and intimidating.

On the way to visit him in West Hartford, I’d in fact been reading about novelist Michael Chabon’s collaborations with musician Mark Ronson. The print piece featured a scrawled-over lyric sheet from their collaboration — a fascinating artifact of narrative-driven writing conforming to the demands of pop music.

I told Fozzy I would think about the idea, and for inspiration he suggested I listen to the works of a young composer named Matthew Aucoin, a “genius” he’d met recently. His recommendation would turn out to be very fortuitous.

One of the first projects Google lists under a search of Aucoin’s name is his Celan Fragments, a musical interpretation of the later poems of the Paul Celan—who is, coincidentally, my favorite poet. Celan’s difficult, beautiful works are filled with cryptic, impenetrable images, and I couldn’t wait to hear how Aucoin would translate the poet’s opaque imagery.

“Poetry is impossible after Auschwitz,” is one of those famous misquotes nobody said like, “Play it again, Sam.” Or, “We don’t need no stinking badges.” In this case, the German theorist Theodor Adorno’s words were mangled so often, he eventually clarified, noting, “It may be wrong to say that after Auschwitz you could no longer write poems. But it is not wrong to raise the less cultural question whether after Auschwitz you can go on living.”

Paul Celan struggled with the same question, eventually writing “Todesfugue,” an excruciatingly exquisite poem about the death camps. In the end, poetry couldn’t heal Celan, but he did try, as his biographers put it so poetically, “to weave the shawl” and “answer loss with language.” Having evaded the Nazis by chance, eventually Celan could no longer go on, despite attempting, through language, to restore all he had lost: his parents, his son, respect for his work.

Celan’s pain must certainly have been exacerbated by the conflict of writing poetry in the language of his persecutors, not to mention in an already out-of-vogue German Romantic style that his mother had taught him. With these influences, he created an inimitable landscape, challenging for the reader and critic, alike.

I’m no fan of pretentious, incomprehensible poems and, at times, Celan’s work approaches this territory. Even the poet’s editor accused him of being too hermetic—airtight and impenetrable—with overly personal allusions. But Celan vehemently denied the charge. “Absolutely not hermetic,” he testily wrote to a translator he mistrusted.

Celan was not the first nor the last poet to be accused of navel-gazing. And within our selfie-obsessed culture, his work is probably more relevant than ever. Celan uniquely showcases the allure of the selfie—a great artist’s capability to make himself his own exclusive subject.

I was introduced to “Todesfuge” as a junior at the University of Virginia. (We UVA “Wahoos” call this a “third year” in our own snobby (and very hermetic) parlance.) My lit theory professor was a tiny, German woman wound as tight as her tiny curls. Celan once described his approach to art using the old German word Enge which translates to: “With art, go into your very self-most straits.” But those self-most straits were not a requirement for my lit theory class at UVA.

The professor disliked me on sight, as if my straits were somehow leaking onto her classroom floor. She presented the poem on a worksheet, tendering its analysis as a simple literary exercise. I don’t remember her Xeroxing other poems, or why we read Celan specifically. I don’t even remember us reading a lot of actual poetry. Instead, we read a lot of work about poems, essays by Barthes and Derida and even Eagleton.

What I recall most about reading “Todesfugue” for the first time was my own embarrassingly sentimental reaction. As Celan described the despised dark-haired “Shulamith,” I couldn’t help but envision the anguish of my own unknown German-speaking Jewish cousins, lost in the mass graves of history. The professor was irritated—preferring her theory, as well as her students, to be served chilled, not room temperature and certainly not with hot tears. She intended for us to deliver a droll, Barthesian unpacking, not spontaneous emotion.

It took me years of lit theory recovery to come back to and appreciate Celan, And it was at this second introduction I learned that the complicated “Todesfuge” had been one of his more accessible poems. Taking Celan at his word, he didn’t mean for us to feel excluded. But his intentions aside Still, the most brutal question remains, how are we supposed to personally reconcile his impossible poems? And, is it worth the effort?

At owl’s flight, here,
the conversation, day-grey,
of the water-level traces.

With an interpreter like Aucoin to guide us, I think it’s a country worth visiting, a place of great and memorable beauty. The composer shows us a different way to approach the journey. To be honest, I kind of prefer Aucoin’s version of Celan’s fragments. I have always had trouble embracing these later poems. It’s his earlier, more accessible work that drew me to him in the first place.

Aucoin solves the obfuscation of words by omitting language entirely, in favor of interpretation by piano and violin. The odd, and equally haunting melody—in a near-tonal score—captures the difficulty of Celan’s prose and translates its ineffability, too.

The composer’s interpretation proves that while Celan’s poems are difficult, they are not hermetic per se. Aucoin’s music invokes the shy words, demonstrating their interpretive worth. But without the helpful translation by a musical “genius”, can they be approached on a personal level or should they be ignored in favor of the more lyrical, easily digestible poems? Is it worth the work to see the world Celan’s way?

Though the complexity of Celan’s poems can be exhausting for a reader, it is worth the extra effort required to unearth his rich polysemy — the many ways he plays with words. If we leave our sensibilities behind, we experience poetic pain so finely wrought his tears become exquisite syllables, clear, hard, and refractory as diamonds. Falling into the cadence of his voice, eventually the rewards are incomparable. Quiet and close sings a haunted voice from a lost world, a lost people — a voice whose humiliation is compounded by having to express itself in the language of those who sought its destruction.

Unlike so many poems where the reader can superimpose oneself like a “choose your own adventure” book, Celan demands the spotlight, writing defiantly about the Shoah in the inadequate language of his persecutors. The reader cannot remain impervious to Celan’s presence within his poems and still receive the import of his painful messages.

Readers are invited inside his anguished selfie, to see the world through his wounded eyes — a terrain in which “milk is black, death is the all-encompassing reality.”

If Celan’s poetry was to be an act of healing old wounds, he likely hadn’t counted on suffering new and substantial injuries. His art soon came under the worst kind of scrutiny.

Many think “Todesfugue” uncomfortably resembles Immanuel Weissglas’s “ER.” Weissglas, a concentration camp survivor and Celan’s classmate, never published the work. And while ”ER” undoubtedly contains similar imagery, the tone of the two poems are antithetic. Rose Auslander, the first poet to use the oxymoronic “black milk,” said she was gratified a greater poet made use of it. So, too, Weissglass dismissed the uproar as “jackal-sniffing.”

Regardless of making these images anew — and with the gracious blessings of the others who shared them — those accusations of plagiarism hounded Celan throughout his life. Eventually he abandoned his earlier style, adventuring into even riskier realms of expression, littering poems with made up words and personal references– riddles for the reader to hunt down. In his later poems like “Wolfsbohne,” he revealed how terrible the wound of his parents’ death in interment camps remained for him – a place so personal very few of us could empathize.

Perhaps nothing could have healed Celan’s own wounds. Language couldn’t — can’t — do the impossible. It could not go through “the terrifying silence” as he claimed in his Bremen Prize speech, “[resurfacing], enriched by it all.” That expectation is a heavy burden to saddle language with, but, ultimately, I think his attempt, besides being beautiful, was courageous.

My eye moves down to the sex of my loved one:
we look at each other,
we exchange dark words,
we love each other like poppy and recollection,
we sleep like wine in the conches,
like the sea in the moon’s blood ray.

I can understand now what I couldn’t back in my lit theory course, why my professor would take her distant stance, shielding herself in the name of objectivity. There’s a risk to Celan’s journey as he asks us to envision his very dark spaces.

Unlike the generic pop music of today, where lyrics allow us to insert our own selves, interchanging banal selfies in places we’ve never been, Celan insists we remain the observer. As readers, we will never place ourselves in his shoes. He forces us to look upon his straits—finely wrought creations brought into the world by a magical fusion of disparate generations and traditions crafted into a singular likeness.

Celan reacted to tragedy with love, art, and desperate hope instead of easy hate and destruction. As we listen to Aucoin’s translation, we hear how this artist, this musician magically captures the sense of eerie dislocation in a beautiful other. As readers, we return to our world of selfies, having been shown there are still spaces we cannot go, but instead must listen and hold our breath. Celan’s work does not allow us to forget, but also shines light over the savagery of the 20th Century and in some measure, too, narrows that gaping grave left there in the clouds.

Isabella David McCaffrey’s work has appeared in Best of Black Heart Magazine, The Lascaux Review, Adbusters, Slippery Elm, Every Day Fiction, and elsewhere. She was longlisted for the Venture Award and is the winner of Tampa Review’s 2014 Danahy Fiction Prize.