Publication changes relationships, no matter what words actually stir between covers. Even the assignment of a book’s publication date can be the catalyst for a chain of interactions editing ties with family, friends, peers, and others the writer will never meet. For appreciators of the form, aspiring or first novelists hoping to be prepared for the experience, it would no doubt be helpful to list all the changes that might take place. It would also be impossible.

Years ago as a novice editor I worked with a celebrity author* who relayed encouragement received from To Kill a Mockingbird author Harper Lee. As remembered and shared, the author turned recluse, famously overwhelmed by public acclaim for her first novel, wished, “I hope your book is successful, but not too successful.” Not the kind of back-of-jacket blurb I hoped to gather, but interesting, melancholy testimony to why there was no second novel (the recently published Mockingbird first draft, Go Set a Watchman, notwithstanding).

While Lee was cautioning on the perils of life in the public’s clutches, more private dreams of acceptance can be just as complicated. Sylvia Plath, author of The Bell Jar, earned mixed reviews and seemed on her way to tepid sales with her autobiographical first novel. A month into publication she took her own life, confronted by the reality that the book neither de-conflicted an emotional relationship with her mother nor discouraged the wandering eye of husband and poet Ted Hughes.

Much happier along this scale of sadness was Courtney Maum’s experience. The author of I Am Having So Much Fun Here Without You, earlier this year lamented experiences with her peers when first noveldom came knocking. Maum described first being on one side of existence in a publisher’s catalog: “I’ve been an icky, self-despising writer envious of other people’s accomplishments and I’ve been an altruistic one genuinely glad of their good news …” and then the other, “Having my debut novel published made me really proud of my hard work, but pride can turn into egotism quicker than you think.”

No matter how much everyone in a writing group voices support, Maum’s caution is a bit of evidence that while, in the words of the hoary cliché, “truth is stranger than fiction,” dreaming of fiction and a cohesion of support and joint literary pursuit is nicer than the truth of publication. As Anne Lamont explains in the “Jealousy” chapter of her meditation on the writing life, Bird by Bird, “Some wonderful, dazzling successes are going to happen for some of the most awful, angry, undeserving writers you know—people who are, in other words, not you … And you are going to want to throw yourself down the back stairs, especially if the person is a friend.”

Quick word to the wise: don’t throw yourself down the stairs. The change in a relationship based on another’s success is often one-sided. Don’t Forget to Be Awesome author John Green probably wasn’t even aware of tension with respect to Nathan Rabin who claims Green as a friend and whose own first novel sold around 5000 copies. Rubin poured out his jealousy over the career arc of someone he describes as “a writer so successful Maya Angelou had to die in order to slip ahead of him in the Amazon rankings for even a single day.” Once they were in the same supportive, paddling to nowhere writing group. Then life and novels happened.

Fortunately, not every first novel portends gloom. An example of a transitioning relationship leaving at least one of the two writers better off was experienced by Stephanie Feuer, whose first novel Drawing Amanda was recently published. She credits jealousy sparked at a friend’s debut book party for a bit of her own success:

… I left with a case of the blues. It wasn’t that I was envious of her success, despite wanting the same for myself. It was that I’d realized why I wasn’t published—the book I was pitching at the time … just wasn’t good enough. That became an “I’m not good enough” funk for a couple of weeks. Then I got a few ideas for a new plot and started researching and developing characters. The funk receded and the process took over …

And to this “rule” that there must be change, Alan Beechey—author most recently of This Private Plot, third in his eccentric-literary-whimsical-cozy-mystery series featuring amateur detective and Finsbury the Ferret author Oliver Swithin—proves the exception. He has neither bad word to say, nor apparently bad word heard regarding the power of a novel to alter his relations. When asked, he can’t remember anything but expressions of pleasure from others regarding his first and later novels, and his joy at their successes and solace at struggles. “The only half-amusing anecdote,” he claims, “is when my sister said to me, with a big smile ‘I read your book!’ but then failed to add anything further, so I still don’t know if that was a good or bad review.” 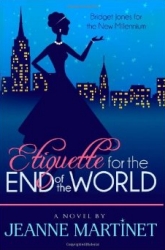 A less enigmatic review from family came to Jeanne Martinet (best known as Miss Mingle), whose The Art of Mingling celebrates its 23rd year in print with an October update and reissue. Her father, a mostly passive supporter of her craft, passed on chances to read any non-fiction because, he once explained, “It’s not my thing.” Things, however, were different with her first novel, Etiquette for the End of the World.

In marketing hype, this “apocalyptic chick lit” is definitely not his usual read according to Martinet. There is cursing, a bit of R-rated romance, and she borrowed select biographical elements in creating her heroine’s family structure. “Of all books for my father to read, I am glad I wasn’t watching him read this one,” Martinet says. “It’s kind of personal … my father not only read my novel, but he read it, and he loved it!”

Martinet isn’t completely sure why this is the book that made her father so expressive of his pride in her work. “I was definitely, pleasantly surprised,” she says about the demonstration of gratification and acceptance. Her usual publishing cul-de-sac of self-help humor isn’t one that gets much respect. However, she suspects that for her father, and many others, “if you write a novel it’s real writing.”

“Real writing” has consequences that other written forms don’t, among them the power to transform. Sardined into the end credits of many movies is boilerplate language about how no actual animals were injured in the making of the film. Perhaps it would be appropriate that something similar be worked out between the Author’s Guild and Association of American Publishers for the title page of novels? The notice would say something to the effect that no people other than the author were hurt during the writing, and add an additional caveat that the experience of a lack of previous changes to relationships to date is no guarantee of no changes to come.

Maybe we’d all do well to consider the words of Pat Conroy—his mother was at once furious at her mis-representation and even more enraged at her under-representation— “Fiction is not without its consequences.”

As much as publishing has changed since my days as a green editor, one thing is still the same: aspiring novelists will save themselves much heartache if going in they accept that there is wanting and the potential for change all down the line. Maybe we’d all do well to consider the words of Pat Conroy—his mother was at once furious at her mis-representation and even more enraged at her under-representation— “Fiction is not without its consequences.”

*A TV celeb, who with that book started a run as best selling author, but remains nameless here from what I admit at this point is petty bitterness from a certain betrayal, itself a lesson in publishing and business that (perhaps) deserves elucidation elsewhere, some day.
Ω