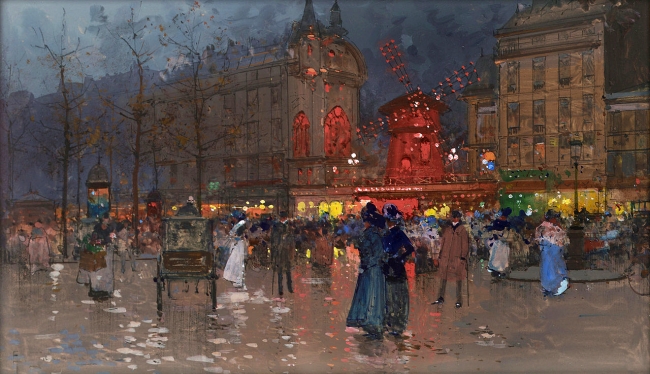 No matter what song was being played, whenever I entered a Parisian club called Aux Trois Mailletz, I would immediately hear a booming laugh, followed by an instantaneous segue. “If you see Kay” is what would suddenly fill the air, each word carefully enunciated so as to underscore the double entendre that eluded most of the French patrons and staffers, followed by: “Tell her that I’m not around.”

In keeping with what had become a running joke, I would chuckle, then stand against the wall until the set was over before making my way toward the piano. “I hear musicians get thirsty,” I would say every time. “Buy you a drink?” “Not two or three?” the man known as Memphis Slim would tease.

Then the two of us would chat, usually about America, until it was time for him to resume playing. Thanks to a combination of persistence, conniving, and luck, I was in a privileged position in Paris: writing the Paris section of a travel guide intended for the youth market while ostensibly studying at the Sorbonne. In addition to making me the only impoverished student with an expense account, the gig gave me a mandate to search for, then visit, anything and everything that might be of interest to American tourists.

For the most part I followed the publisher’s directive by hitting spots that were quintessentially French: restaurants, cafes, museums, churches, nightspots, cinematheques, and even cemeteries where dignitaries were buried. But having grown up in a largely black part of New Jersey, where my favourite radio stations came from Newark and Harlem, I was thrilled to learn that a blues legend was holding court at a boite near the Seine.

I went there that very evening, and immediately was hooked. Though I rarely stepped foot in the place on weekends, when it was populated by the Parisian equivalent of what New Yorker’s call bridge and tunnel traffic, hardly a week passed by without my popping in on a Tuesday, Wednesday, or Thursday. Memphis Slim, who wrote songs under the name Peter Chatman—and who at that point was no longer particularly slim—had initially migrated from Tennessee to Chicago, where he often worked with Big Bill Broonzy before getting a deal with Bluebird Records, whose owner, Lester Melrose, gave him the nickname that he would use throughout his career.

After recording a couple of tracks, then serving as a session keyboard player for the likes of Washboard Sam and Sonny Boy Williamson, in addition to Broonzy, he moved to Hy-Tone, where he first got to team with bass player Willie Dixon. Dixon would go on to become not merely a close friend, but also one of America’s all-time great songwriters.

It was while on the Hy-Tone label that Slim received national attention, first thanks to a concert produced in 1947 by Alan Lomax at New York’s Town Hall, where he performed with Broonzy and Williamson, then with a number one R&B hit the following year, “Messin’ Around.”

From there his recording hejira continued with occasional sessions for Don Robey’s Houston-based Peacock and Sid Nathan’s King in Cincinnati before scoring another hit with one of the most covered songs of all time, a tune originally titled “Nobody Loves Me” that’s better known today as “Every Day I Have The Blues.” Next stop was Premium, where he recorded the first version of one of his signature tunes, “Mother Earth,” then Mercury, United, and Vee- Jay. Having gotten a taste of the international scene thanks to a 1960 tour of Europe with Willie Dixon, Slim was one of the first to sign on when German promoters Horst Lippmann and Fritz Rau, together with Dixon, conceived the European phenomenon that would become known as the American Folk Blues Festival.

Monumentally influential not just for giving work to musicians whose popularity and earning power had diminished in the U.S.A., but also for allowing those who would soon be the movers and shakers of the British invasion—among them Mick Jagger, Eric Burdon, Stevie Winwood and Eric Clapton—a chance to see their idols in person, these annual events featured some intriguing onstage pairings, among them Slim with T-Bone Walker, plus Muddy Waters together with Sonny Boy Williamson.

Whereas artists like John Lee Hooker, Howlin’ Wolf, Mississippi Fred McDowell, Big Mama Thornton, Lightnin’ Hopkins, and Koko Taylor came to Europe to play the festivals, then took their cash and headed back home, Memphis Slim chose not to get back on a plane. Instead, liking the life he found in Europe—and especially in France—he set up residence in Paris. According to lore, American musicians who became expatriates in France over the years did so to escape the racism they had been subjected to at home. While that may have been true in various degrees for Josephine Baker, Sidney Bechet, and others, such was hardly the case with Memphis Slim.

His decision, he told me, was based on the realisation that the passage of time, coupled with the emergence of rock’n’roll, had made life tough for blues musicians, even giants like Muddy and Wolf. Instead of being forced to scuffle through the fall and winter in the States while waiting to pack his bags for summer festivals, he had discovered that rarest of combinations for an artist: continuity and respect. “Back home I’d either be sitting around or hustling,” he said with a shrug one evening. “But here I work all I want, eat tons of great food, and keep on having fun.”

“You’re a living legend,” I said playfully. “Maybe,” he countered with a laugh, “but to some folks it’s a legend I’m still living!” It was that same evening that Slim starting filling me in on the latest in the life about a guy he termed “our old buddy,” meaning, I came to realise, Willie Dixon. Not wanting to hurt his feelings by letting on that I’d never met—or even set eyes on—the great Chess Records songwriter, I simply nodded, assuming that was that.

To my dismay, however, it was only the beginning. From that point on, virtually every night I came in, Slim would either give me regards from Willie or let me know that he’d been asking about me, which I took to be strange, amusing, and in a funny way flattering. Feeling awkward, but not wanting to cause any embarrassment, I starting responding in kind, asking to be remembered to a man I assumed I would never have the chance to meet. Unlike Slim, my time in Paris was finite. Though I did my best to follow him in those pre-internet days, and was thrilled when the French Ministry Of Culture bestowed upon him its highest honour, Commandeur dans L’Ordre des Arts et des Lettres, it was hard for me to keep in touch from New York, then even harder when I relocated to Los Angeles. But my move to the Coast provided me with unexpected opportunities when my friend Ian Whitcomb got money from the BBC to stage and film a series of blues concerts, which enabled me to meet artists I’d long idolised.

First up was Big Mama Thornton, who, though frail, put on a wonderful show. The same was true of the singer who followed, Big Joe Turner. But the real thrill for me was the star of the third concert—the great Willie Dixon—who was gracious when Ian introduced me to him. “A pleasure to make your acquaintance,” he said warmly. “Actually,” I replied, “the two of us kind of know each other.” “How so?” he asked, surprised, yet clearly dubious. “Through a mutual friend in Paris named Memphis Slim who used to give us both updates.” Stunned, Willie eyed me strangely, then burst into laughter. “You’re the motherfucker?” he bellowed, lifting me off my feet in a bear hug. “Well all right!” That was an evening I’ll never forget.

Alan Swyer is an award-winning filmmaker whose recent documentaries have dealt with Eastern spirituality in the Western world, the criminal justice system, diabetes, and boxing. His screen credits include “The Buddy Holly Story” and “Rebound.” His novel The Beard was recently published by Harvard Square Editions. He nearing completion of a film about “the most famous person most people have never heard of,” musician Billy Vera.