The King of Rock ‘n Soul

Dubbed by Jerry Wexler of Atlantic Records The greatest singer—and hustler—in the world, Solomon Burke had a story second to none. The godson of the celebrated evangelist Daddy Grace, whose friendship with Solomon’s grandmother started in a village in the Cape Verde Islands, Solomon got his first taste of attention as The Boy Preacher, taking the pulpit at the age of eight. Because he turned to secular music at a time when record stores stocked titles by category—with R&B, according to black clergy, the Devil’s music—a new term had to be coined to accommodate him. Hence, Soul Music. 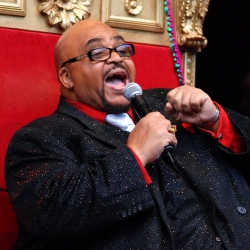 Though he achieved a measure of success on the charts, it was, sadly, mainly because of his antics—giving fire and brimstone sermons between songs, then supplementing his income on buses that carried the headliners from gig to gig by selling fried chicken (Buy some now, ‘cause the farther South we go, the more it’ll cost you!)—that he became a legend among music insiders and aficionados. That legend was enhanced over the years because, as I often teased him, he took the Bible literally when it said “Be fruitful and multiply,” siring twenty-one kids. Little wonder friends called him The father of our country.

For the public—especially white audiences unaccustomed to hearing preaching from the stage or references to welfare checks—he was considered too black. That euphemism for too scary was not an inhibitor in Britain, where Solomon was venerated by a generation including Mick Jagger, Eric Burden, and Robert Plant. Nor was it so in Jersey, where his records were revered by kids who grew up to be Springsteen, Southside Johnny, and me.

Despite hailing not from the Delta, but South Philly, Solomon was considered—like Joe Tex, James Carr, and Don Covay—a Southern act, unlike crossover stars Otis Redding or Wilson Pickett.

And, while he was warm, thoughtful, and big-hearted with me and my family, it did not help that Solomon had a reputation professionally for often being irascible and difficult.

Times became tough not just financially, but also emotionally, for it seemed that no week went by without the passing of someone with whom Solomon had a shared history. It could be a household name—Ray Charles, Ike Turner, or James Brown—or a niche artist like Charles Brown, Dorothy Norwood, or Ruth Brown. For him the result was always the same: a sense of sinking into obscurity while those he cared about disappeared.

My counter whenever he got despondent was: “Your time is coming.” That became a running joke, with Solomon often responding, “When?” But after several years, he lost hope. “It’ll never happen,” he said after one death too many.

“What makes you so cocky?”

“What in the world are you saying?”

“That if you’re talented and get a few breaks, you can make a pretty good living until you’re, say, 45. Right?”

“But from 45 to 65, unless you’re a superstar – Sinatra, Ray Charles, Ella, Streisand—you’re pretty much cooked.”

Though I’d love to take credit for the offer Solomon got as his 65th birthday neared, I had nothing to do with it. A hipster label known for resuscitating the careers of aging Blues artists had come up with the ploy of using songs written by big names in the white music scene to introduce Solomon to a new audience.

That Solomon, aside from often feeling blue, had never been a Blues singer, was irrelevant to those running the label. So was the fact that songs ostensibly written for him were probably plucked from drawers of material that had long sat unwanted and unrecorded.

The opportunity brought much-needed hope into Solomon’s world. Until, that is, he learned the conditions. In what was marketed as an aesthetic choice, but in truth was as much a way of cutting costs, the album would be done Live In Studio. Translated, that meant that instead of carefully laying down tracks, all recording would be done in just four days.

Solomon’s elation gave way to panic. Faced with songs he neither understood nor liked, and musicians he didn’t know—all of them white—plus the realization that time pressure would be monumental, all the thorniness usually kept in check started erupting.

Asked by his manager and two of his daughters to come to the rescue, I calmed Solomon by providing a focus. Since his deal gave him the right to choose one musician, we talked about which instrument would complement those already selected. Settling on a Hammond B-3 organ, we agreed on our enormously gifted friend Billy Preston.

When I reported that Billy was both available and excited, Solomon was relieved.

That relief proved to be short-lived. As Day One of recording neared, Solomon started calling me earlier and earlier each morning, upping the calls to three, four, or five a day to express concern and trepidation.

Having promised to be present for the first session, I made certain to arrive early, which was fortuitous since Solomon was not in the best of spirits. Accompanied by his daughter, Victoria, he entered with a chip on his shoulder, then glanced at the young white musicians setting up.

“This makes no sense!” he snarled.

“They don’t play my kind of music. Or even know who I am!”

Waving the company man away, I pulled Solomon aside. “They worship you,” I whispered.

Solomon spoke first when he saw Victoria return with a pained expression. “What now?”

“This is jinxed!” Solomon announced, ready to leave.

“We’ll get somebody else,” I countered.

“And plays his butt off.”

Solomon bit his lip. “Think he can pull it off?”

Solomon turned to his daughter. “Who said that?” he asked.

Solomon gave a wry smile. “Baby, call Rudy,” he told her. “Tell him to drive his butt here ASAP.”

“You’re forgetting something,” I interjected.

Hoping to keep Solomon upbeat, I was about to get him a coffee when a guy with a neo-hipster goatee, hat, and geeked-out shirt, approached.

“Solomon!” bellowed the session’s producer, proudly displaying a coffee table book. “Check these photos of you.”

Solomon beamed at the sight of black-and-whites of him performing in the fifties. “What is this?”

Solomon nodded. “Where’d you get this?”

“On Ventura near Laurel Canyon.”

Victoria already sensed where this was headed, so Solomon faced me. “Know the place?”

“We’ll be back soon,” Solomon announced.

“To get a copy in case they run out.”

“And if we stop for a bite, it won’t be a long one.” Taking hold of Victoria, who was fighting back laughter, Solomon shot me a wink. “Meet you at the car.”

Fearing that his budding producing career was going up in smoke, the producer turned to me in desperation. “What the fuck do I do?”

“Give him the fucking book.” 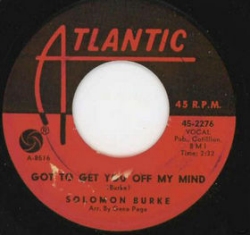 Though the producer never realized he’d been hustled, and Solomon, who never bothered to learn the words and thus had to read lyrics while singing, the four days of recording hit no other serious bumps or hurdles. Rudy brought an invigorating churchiness to the sessions. The other musicians, who indeed worshiped Solomon, rose to the occasion. And the great man demonstrated that, even at 350 pounds and rising, he still had the best pipes on earth.

But while the record company prepared to take Solomon places he’d never been before—the Tonight Show, National Public Radio, even the cover of Rolling Stone—with royalties and summer festivals that would pay bills still far away, he was still hurting financially.

Fortunately, a publicist whom, for purposes of discretion I’ll call Rob Everett, phoned me. “I’m repping an event,” he stated proudly. “The DVD Premier Awards, and—”

“You want me to get Ray Charles.”

“Wouldn’t it mean something to him?”

“When was the last time Ray said, Not tonight, baby, I’d rather watch a DVD?”

“If you’re lucky I can get Solomon Burke.”

“The King of Rock ‘n Soul. He’s going to win a Grammy for an album with songs written specially for him by Van Morrison, Tom Waits, Bob Dylan, Elvis Costello, and other fans of his. Get him while you can—if, that is, you’re paying.”

Everett promised to give it some thought, then called the next day. “Sure about that Grammy?”

“I owe you!” Rob Everett gushed the day that Solomon was nominated for a Grammy for Best Contemporary Blues Album. And he was absolutely jubilant when, a week before his awards dinner, Solomon won.

At the age of sixty-five, which made him officially a Living Legend, the King of Rock ‘n Soul had suddenly become the Comeback Kid.

For what it’s worth, he killed ‘em at Rob’s award ceremony.