Is This the Promised End? 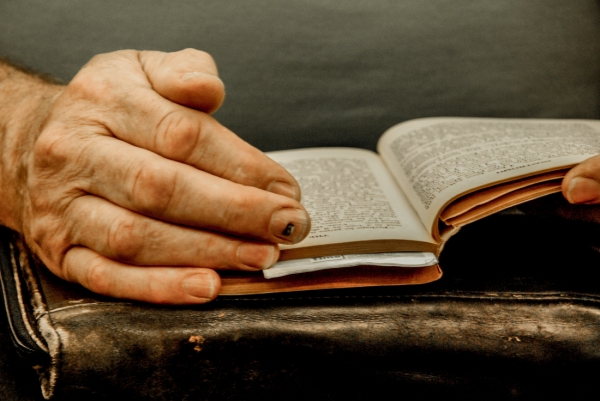 Morris Brandson in his beige raincoat—the one he inherited from Arthur Miller’s Willy—trots along the damp grounds of his forsaken city, fighting the ruthless blows of the raindrops in the wind. His makeup smeared, he is barely able to pull behind him his black-turned-grey suitcase, heavy with costumes and props he accumulated from more roles than he can actually recall. A sword sticking out of the front pocket, a crown tied with a rope to the top handle that dangles along the way, and a piece of green velvet peering out from the side of the suitcase where the zipper tries to meet its end. He pulls and pulls at this suitcase, one moment with his right hand, another moment bringing his left hand into aid, as he switches the roughened leather binder full of papers from under one arm to under the other arm. The last of the dried and discolored leaves left on the ground from this deep autumnal day, whirl in the wind and desperately try to stick to the suitcase, to his overcoat, to him. Life, they seek; escape, they scheme from this city, overflown with crouched shadows of its inhabitants.

The rain drops mix with the tears on his cheeks as he moans—and moans with him the suitcase—while he combats the reluctance of his feet to move toward the ambiguous destination he calls home. The rope, holding his crown, unties in this struggle and sends the crown rolling down the very middle of the street. Morris, enraged, stops to look at it for a few anguished seconds, then quickly turns away and continues to walk as fast as his frail body can bear. And in the fury of the wind he misses an awkward structure of the pavement at a corner of a building he passes … and stumbles, reluctantly falling on the ground.

His palm is bleeding, muddled with the wet dust of the street. The other palm is securely protecting the leather binder. For a short minute Morris is frozen (thinking the thoughts that pass through the mind of the fallen) and a moment later his eyes glaze with a maddening spark of anger as he throws the binder up in the air, as far away from him as he can manage. “One line I forget! One line!” he shouts, “and they already define me … the all-too-powerful dementia!”

The binder lands on the wet asphalt of the street not too far from him. Papers fly out of it, fluttering in the air like white linens would in a gentle breeze of an early fall. Morris picks himself up from the ground, his knee hurt, he limps toward his suitcase and wearily sits on it. Tears desperately roll down the crevasses left behind the smeared makeup of none other than King Lear. A paper flies and lands in front of Morris’s feet. On it, the lines he forgot less than an hour ago, paralyzing him in the middle of the stage for what seemed to be forever:

Nina Kotyantz is a writer, filmmaker, photographer and occasionally an actor. She holds a master’s degree from Harvard University, with expertise in existential anthropology, psychoanalytic theory and storytelling. She has published fiction in Thrice Fiction magazine, and several creative non-fiction pieces at The Wick—Harvard Literary Journal, the latter under her legal name—Heghine Kotoyan. She lives in Brooklyn, NY, and is currently working on her first novella.