The Inner Lives of Salad Forks 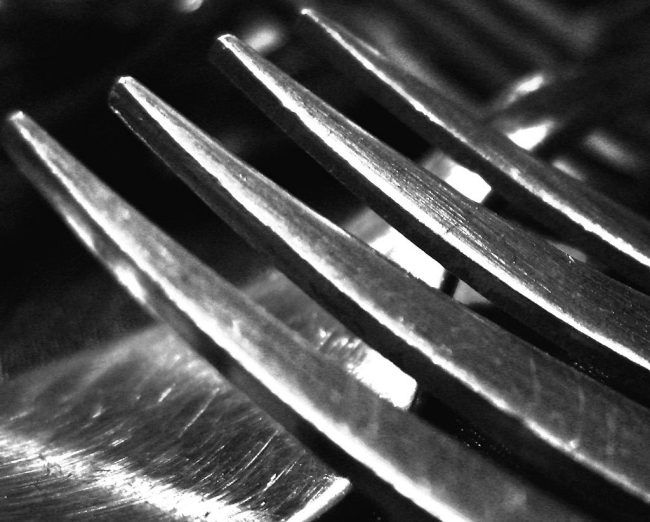 “Somebody’s going to have to share,” I said to the eight utensils assembled in the dishwasher’s silverware basket, one per compartment. I towered over them, dangling a recently used cereal spoon. A butter knife occupied an end stall near the dishwasher door. “You’re getting a roommate, buddy,” I said, dropping the new arrival into place. The knife recoiled. The spoon felt like a pariah. For as long as I can remember, my world has been alive with inanimate objects.

In third grade, my desk sheltered weary pencil people who rested their heads on puffy, pink eraser pillows. Trashy Veronica, the flamboyantly violet ten-speed I rode as a teenager, lived in the garage and was a constant embarrassment. I wondered if my tendency to anthropomorphize made me a freak, or part of a weird community.

“I do that too,” said my sister in Los Angeles after I described my one-sided dialogue with my dishwasher’s inhabitants. “Except I think the utensils hate being alone. I feel bad when one is by itself and the rest have company,” she said. At the time, she shared her home with a husband, a toddler and several houseplants. I’d lived by myself for twelve years.

“But it’s like having a roommate,” I protested. “They must hate sharing such close quarters.”

“You just feel like that because you live in New York. I think spending time in the dishwasher is more like going to lunch with a friend.”

While geography may have influenced our conflicting interpretations, I wanted to unearth the root of our perspective. Sitting in my mother’s suburban kitchen, I sought answers as she attacked the contents of the sink, her rubber-gloved hands sanitizing each plate before its journey to the dishwasher. The silverware basket looked forbiddingly full.

“No,” she said, as she jammed a pair of salad tongs into an occupied compartment. “I don’t think about silverware that way.” She turned with a smile. “For me, it’s the glasses.” She flung open a kitchen cabinet to reveal shelves of neatly ordered goblets, tumblers and mugs. “Whenever I use one, I know the others are jealous. It’s not fair. The back row never gets a chance.” She concluded, “The apple doesn’t fall far from the tree.”

From behind his newspaper, my stepfather said, “You people are nuts.” He echoed the view expressed in an old Ikea commercial that departed from the kitchen and began with a woman abandoning a goose-necked desk lamp near a garbage heap on a rainy night. The wind howled. Sad music played. Then came a disembodied male voice. “If any of you feel sorry for this lamp that is because you are crazy. It has no feelings and the new one is much better,” he said.

I suspected neither genetics nor insanity explained these feelings, and decided to investigate. Following an online request for sources, my inbox soon overflowed with evidence that, beyond my immediate family, the practice of attributing human emotions to things thrived.

One woman expelled déclassé volumes from her bookshelf because, “to stand next to them would upset the literature,” she explained.

Another brought me back to the kitchen. “The fork is a boy, the knife is a man and the spoon is a girl,” she said. “Every time I set a table, I imagine the girl wants to be near the plate, not on the outside as if she’s defending the knife.” Most of that made sense to me. Still I wondered, Why doesn’t she see that the spoon, with her sleek pageboy, is a grown woman?

Psychologist Adam Waytz, an associate professor of management and organizations at Northwestern University’s Kellogg School of Management, couldn’t answer that question. But having spent nearly ten years studying the topic of anthropomorphism, he offers explanations for the phenomenon and believes there are critical reasons to seek to understand it.

Waytz suspects everyone anthropomorphizes inanimate objects and forces to some degree. The metaphoric language commonly used to describe stock markets as climbing and economies as ailing, support his view. Waytz says anthropomorphizing “is the simplest way to understand phenomena we’re not familiar with.” We treat them like what we know best—ourselves. After all, we don’t know what it’s like to be a dog—or a piece of cutlery.

Waytz and his colleagues have written numerous articles that detail how we benefit from attributing human characteristics to animals or inanimate objects or phenomena. They say it can help us feel more connected socially, especially if we’re feeling isolated. Consider, for example, the relationship Tom Hanks’s character established with a bloody volleyball in the movie Castaway.

Yet this explanation strikes me as inadequate to explain my lifelong responses to the objects with which I interact, regardless of my mood or social status. I find more compelling another, which Waytz and his co-authors articulate in “On Seeing Human: A Three-Factor Theory of Anthropomorphism.” They write that effectance motivation, the desire to master one’s environment, can also drive us to anthropomorphize. It’s a way to create structure and reduce the anxiety that comes with uncertainty. Knowing I’ve done my best to give all my utensils their own chamber does, in fact, give me peace.

That’s nice. But why has Waytz devoted much of the past decade to this seemingly quirky topic? He says it has important implications for several fields beyond psychology, including technology, the law and health care. For example, his studies show that technology appears better able to perform as intended when it seems to possess a human-like mind. At a time when people must interact with a dizzying range of technology, at home, at work, in their cars and beyond, this suggests there are meaningful consequences to humanizing it.

Anthropomorphism is also relevant to legal systems, which may determine guilt or innocence based on beliefs regarding the ability of an agent to act intentionally. Likewise, rights determinations often hinge on the perceived capacities of the agent—whether animal, fetus or psychopath. Anthropomorphism’s implications for the law touch, most obviously, on issues including animal rights, euthanasia, abortion and capital punishment.

Waytz says even the weakest forms of anthropomorphism matter because the tendency to ascribe human characteristics to non-human entities has been shown to influence behavior. “Even if people ‘know’ the entity in question is not human, they still treat it as such,” he says. For example, in “The War on Prevention,” professors from the University of Michigan and the University of Southern California explore how warlike cancer metaphors can hinder prevention. Their research suggests that, when people believe they are fighting an enemy, they are less apt to limit their own risk-increasing behaviors, like smoking.

Finally, the more we understand the process by which we humanize objects, the more we will learn about the inverse process of dehumanization. Or as psychotherapist Tina Tessina told me, “People who treat objects as people are happier and more successful than people who treat people as objects, because their relationship with the inanimate makes the world seem friendlier and more welcoming.”

Still, sometimes the relationship ends violently. “Everyday objects constantly conspire against us,” said one man, who was eager to share his experience. He remembered shaking with rage after a willful wineglass shattered on his poured concrete floor. “Look at you now, smartglass! You’re in a hundred pieces and you’re going to be recycled.”

Adriana Gardella is a lawyer-turned-writer who created, and for several years wrote, an online New York Times column. She also contributed numerous articles and an essay to the paper’s print edition. Her work has appeared in a wide range of publications, living and dead, including National Geographic Traveler, Newsweek, The New York Observer and Salon. An excerpt from her memoir about work will appear in the Winter 2018 issue of Broad Street. She lives in New York.