On a Night Spent in Hazleton, Pennsylvania 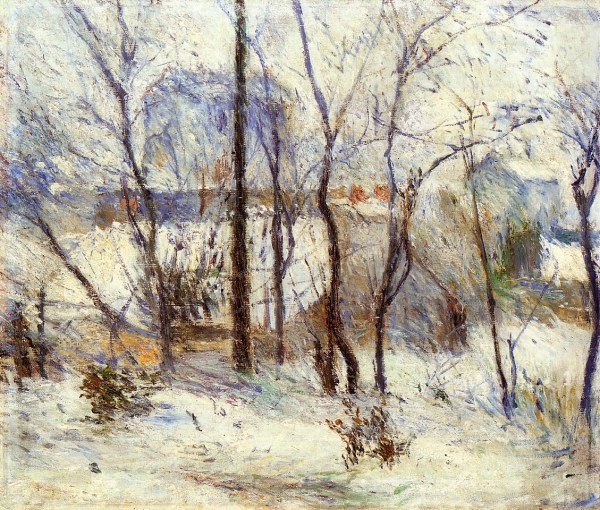 On the drooping, vermillion couch,
flanked at one end by a linoleum table
and at the other by cartons of Marlboros, stacked precisely,
I awoke still amid the blizzard, leaning its weight
against the sides of the frame house.

Earlier that day, pinched along Route 81
by tractor trailers, within the whitest white
that I had known, I’d steered the car
toward an invisible exit, toward the only light
persisting in the weaving blindness,
and had found Hazleton, all shingle and billboards,
packed like a tight fist into the snow.

The off-ramp spiraled down alongside a church parking lot,
blanched and petrified by wind. And to the right,
beyond the useless headlights, a row of homes,
simple, abutting the road.

I stammered through the wetness in my too-short boots
and to the one porch bulb that permeated. Inside,
an older couple, only briefly hesitant, made cocoa
in a periwinkle pan and told me of the snow that cascades in
between the hollows of the mountain, the way that it can blind you
to the asphalt, erasing depth and texture from the landscape
and flattening the world.

Exhausted, blank as an empty envelope, I agreed to stay,
and heaved my legs onto the sofa’s springs, covering them
with a strawberry-dotted blanket—a visiting grandchild’s remnant—
and breathed in the tobacco air, holding my mug against my chest.

There in the night, alert, an image of the melancholic love
that I had left up north spread in my mind
like ice into the corners of a windowpane. In that cold city,
radiating youth, I had been far lonelier than even here—
a stomach-gnawing loneliness, hungry and silent,
digesting itself. We’d breathed into each other
and known no benefit, no swelling of the lungs,
and parted as children in the quadrangle’s gray light,
air threatening snow.

In the little house, the pillows put their hands
against the bones of my back, and the den lamp
blazed its warm lighthouse circle onto the ceiling.

This March, I drive Route 81 to visit friends.
I see the forms along the road and know
that I am seeing them as newly made things:
the moving lines of red oak through the windshield’s smudge,
layers of hill, road signs assertively rectangular,
car shapes in their leisure and fury,
and Hazleton, low and present.
Far above, the sky is the brightest lavender.

Rachel Adams lives in Washington, DC, where she is the editor at an nonprofit advocacy association and the founder/editor of Lines + Stars, a literary journal. Her poetry has appeared in The North American Review, NOON, Blueline, The Conium Review, Free State Review, The Wayfarer, and elsewhere. She is the author of two chapbooks, What is Heard (Red Bird Press, 2013) and Sleeper (Flutter Press, 2015).