Gilgamesh: A Film Treatment for the First Action Hero 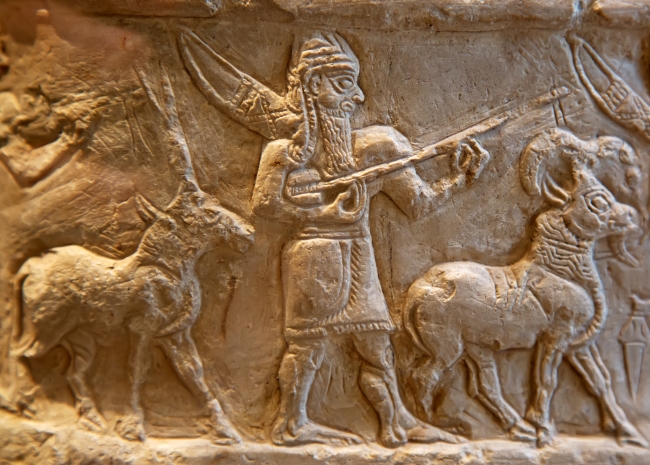 History of the Story: In the third millennium, fifteen hundred years before Homer’s Iliad, Gilgamesh was the stuff of legend. In fact, he was the first tragic hero. His dime-store novel was writ large on clay tablets. These were buried in the collapsed library of the last Assyrian king in the 2nd millennium, lost for centuries, dug up and stolen from the natives by the English Empire to be translated in the 1850s. Fortunately, no one but World Lit majors know the story, so we can do anything we want to it.

High Concept: Historical period-piece drama about a Warrior—swords and blood splatter, Lord of the Rings-type setting. Gilgamesh’s story is the first tragic epic and a cinch for a high concept epic film. He was first, he was the biggest and he was the baddest. He rolled out of the desert like a raging wind, ripped the kingship of Uruk away from a council of old and weak men, and ruled the finest city-state of Sumeria for one hundred and twenty-six years. None of the hundred-plus years chalked up easy. He twisted history and the gods twisted him. For Gilgamesh, it was all about immortality. For the gods, it was all about putting down the uppity monkey-boy. So really, Gil is the come-back kid.

Character: The Life and Times of an Action Hero—Indentured Servant, Slave on the Run, Soldier of Fortune, Blood-soaked King, Great Civilizer.

Gilgamesh is born in the 2700s BC in a dirty little village outside of Uruk. His father is a womanizer and his mother a goddess who decamps soon after for more divine digs. They both abandon a baby who’s half god. When still a boy, Gilgamesh runs away from his slave life into the South Caucasus mountains. After he has his fill of living rough and killing sheep and stag, he wanders home and takes up the trade of soldier-of-fortune, hiring out his bronze battle axe to various Sumer city-states. Returning to his own neighborhood just as King Dumizid of Uruk has a fatal stroke, Gilgamesh parlays his sociopathy and brawny charm into his own crown. As part of a festival, he deflowers Ishtar’s high priestess in a public copulation. Significant Computer Generated Imagery (CGI) to be used here for pan-back crowd shots.

Gilgamesh hasn’t picked up skills of kingship while a mercenary, and he’s soon in trouble with the locals for sleeping with their daughters. Before he had been the loner, the outsider and his lack of social skills gives the script comic relief driving the plot—this guy wipes his nose on the other guy’s sleeve. The gods send him a best friend, a Sasquatch-type fellow named Enkidu raised by wild animals. Enkidu lucks into some educational breaks: after Enkidu gets seven nights and six days of humping a golden-hearted whore (officially a temple prostitute) in the grass, she cleans him up and takes on his education. Enkidu rolls into Uruk to mop up Gilgamesh—they have an enormous fight, Gilgamesh wins, and Enkidu gives in entirely. As the new sidekick, Enkidu gentles Gilgamesh down and keeps him out of the bedrooms of newly-minted brides. Homoerotic element here—the gays will love it but the dim heteros won’t catch it.

A bored King Gilgamesh envisions himself as a city builder, but living in a desert he’s scarce on wood. The Euphrates Valley has already been stripped bare of trees. He and Enkidu travel to Lebanon to rob a Gorgon-like monster named Humbaba who owns the Cedars. Jewish element here—the sheyne yids will love it.

Humbaba has defeated all previous challengers prior to this duo’s arrival, and has his own version of Cruise missiles—the Seven Splendors. Major CGI here also. Again the gods intervene for Gilgamesh, and he and Enkidu capture and then murder Humbaba in a morally awkward moment. We can soft-pedal it or exploit it, depending on the focus group results. Gilgamesh rafts the cypresses of Lebanon down the river and Uruk’s building boom takes off.

But things only get worse for the hero. Hubris, our favorite Hollywood theme, trips him up. Gilgamesh and Enkidu tangle with Ishtar, a lustful goddess. She is way hot for Gilgamesh and offers him the job of boy-toy, frozen in time in the heavens of the gods. Gilgamesh, all mouth, tells her off by listing Ishtar’s savagery towards former lovers—she’s a major bitch. He humiliates her: she goes to war. Gilgamesh and Enkidu battle her father’s Bull of Heaven (CGI here). They slaughter this great icon of the gods and hurl the intestines at Ishtar. We do an Animal House moment here, followed by the Oh Shit moment. Someone has to die by now, and the gods choose Enkidu. Enkidu perishes in a startlingly grotesque fashion, something close to E-bola, and Gilgamesh loses the only real friend he’s got. Worse yet, it dawns on Gilgamesh that he himself is mortal, in spite of his divine bloodline, and can snuff it at any time.

Act Three: Buddy is dead, World is against Hero

Totally bummed, Gilgamesh cuts and runs. He wanders the hinterlands searching for relief from his grief and a cure for his fear. (CGI of mythological creatures sprinkled through here, including two lion-scorpions) He ends up at the door of the only man made immortal by the gods, the Sumerian Noah, Utnapishtim, but only after sailing across an ocean of lethal waters. Utnapishtim lives his unending existence in a sedentary way, a couch potato back when they made couches out of stone—but he had been granted immortality by an overly-apologetic god Enlil who sent the Great Flood.

Things don’t go well between Gilgamesh and Utnapishtim, who has every intention to jerk Gilgamesh around. Gilgamesh is seriously pissed by Utnapishtim’s trickery and chatter, bored by the Great Flood and way too persistent in his desire for everlasting life. Utnapishtim gets rid of him with a limited cure for death—a stinging sea-lotus that slows the decay of the body to a crawl. But Gilgamesh’s judgement flies off target again—he leaves the lotus on the edge of a well and a local serpent gobbles it down, sheds its skin and swims off. We could CGI the snake face and make it look like George W. Bush.

Gilgamesh returns to Uruk having seen three versions of eternal life and having lost all three. Now he realizes what his dream had been—to be the boy king, valorous, promiscuous and warlike forever. And this dream ain’t gonna come true. As mournful as any supreme ruler could be, he embraces his approaching death. He even achieves a fairly benign kingship. The city walls are completed, a ziggurat and a half dozen temples added and many hectares of gardens and orchards planted. He marries enough wives to be troubled and oppressed, and has many children. When he dies, the lamenting people of Uruk divert the Euphrates to build his tomb on the river floor, then return it to preserve their hero king forever, beneath the flood. Think Nick Cage at the end of Raising Arizona.

a. Rename gods to understandable names; e.g., Sun God Shamash could be Slammin’ Sammy and be black, played by an LL Cool J type. Head God Enlil could be Edgar and played by a Malkovich character. Humbaba could be named Snakehead and the voice could be done by Ralph Fiennes.

b. Rename Upnapishtim to the more conventional Noah and see if Russell Crowe wants to do the cameo.

c. Enkidu should be renamed Tank and be played by Vin Diesel.

d. Keep Ishtar and Gilgamesh’s names. They have brand value. We don’t think they’re copyrighted yet.

e. Cast two Gilgamesh characters—the boy, played by a Josh Hutcherson-like character and the warrior, played by a Matt Damonish actor. Maybe even ink Matt for the role—he can sure do the old king depiction now.

f. Lose Act 4—nobody cares how beloved the King became. Instead, turn Gilgamesh into an Attila-the-Hun type and have him conquer ALL the Sumer city-states. Have him telling the tale like Little Big Man, bracketing the movie front and back, only to the hottest teenage girl we can cast. This gives us sequel opportunities.

CARA should be either PG with lots of T&A or R, depending on the boom-boom.

*
This film treatment was adapted from the Prologue of Jupiter and Gilgamesh, a Novel of Sumeria and Texas, by Scott Archer Jones. It originally appeared in The Prague Revue.

Scott Archer Jones lives in New Mexico. He’s worked for a power company, grocers, a lumberyard, an energy company, and a winery. He has published three books: Jupiter and Gilgamesh, a Novel of Sumeria and Texas, The Big Wheel, and a rising tide of people swept away.