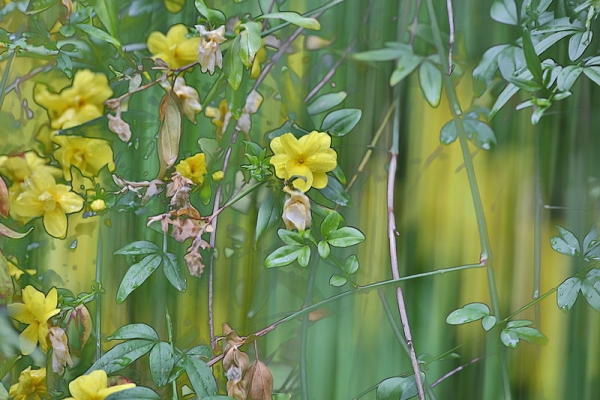 Delusions at the Border

Yes, I exorcized my French identity
and liquidated my assets.
I nibbled on my trapezoid sandwich
of elk and cinnamon, claiming
I was Aristotle. My passport
photograph resembled a gargoyle
on an overheated radiator. Hinting
to leave, I admired your wildflowers
that blazed like foxes in snow. Spoiled?
I was, but I snipped my babble and blew
a kiss at you, gripping the broom
extra hard to sweep you off your feet.

I tease you, reveal I’ve hidden twenty
jars of freckles among the redwoods
outside the cabin, and whisper into your
ear that my nickname is Lambchop.
You think I’m a flesh tyrant, but that’s
untrue: though I remember not to guru
phobias about monogamy, I twitch
as my tongue trembles in the dark
forest of your crotch and sings
Hallelujah! at the memory of you naked
under the waterfall. Or am I a cousin
of bad luck when your hand in a cast
bids Ciao with the sunlight unfolding?
The mist is a porous vision of wet silk
and I crave you inside a Victorian coach,
not my rusty Suburu. I have a train to catch,
you announce, and thanks for your corsage
of knockout pot, but if you weren’t such
a miser, Lambchop, you’d return my freckles.

Six Months After a Hippo Ate Me

the reporter asked me what went
through my mind as the cauldron
of a beast bit me forty times. I answered
Oh, my favorite song, “Like a Rolling
Stone.” No, I thought I’d never again eat
tutti frutti ice cream, play croquet
in December, or answer lame questions.
Much prettier than that cranky hippo,
and not fat like the absconder of my legs
that dangled over the boat that August day,
she reminded me I was the luckiest man
alive. I was afraid I’d be just another Ahab
until she, in front of millions, and with huge,
feral eyes, asked me to marry her,
but I answered I couldn’t because
one near death experience was enough.

Submitted by a name or future famous poet,
its charm proves it needed writing.

My New Yorker poem has no moody modifiers (oops).
It’s subtle, will sneak up on you like a computer virus,
and has a surrealist bent (it’s recorded on a melting iphone).
Honest (it wants to be in The New Yorker)
and perennially persistent (rejected five times),
it keeps banging on the magazine’s broadband.
Yep: it’s smart (genes made it smart),
crafty and witty (that’s a matter of opinion),
with too many parentheses.

This New Yorker poem doesn’t take itself too seriously
and poses in a polished mirror like a beauty contestant.
Composed in a reverie on an antique Corona,
it might enter the slickest pages on the East Coast.

On second thought, I’ll echo
the attitude of a favorite poet:
Ah, fuck The New Yorker!

David Spicer has had poems in Yellow Mama, Reed Magazine, Slim Volume, The Laughing Dog, Jersey Devil Press, The American Poetry Review, New Verse News, Ploughshares, Bad Acid Laboratories, Inc., Dead Snakes, and in A Galaxy of Starfish: An Anthology of Modern Surrealism (Salo Press, 2016). He has been nominated for a Pushcart, is the author of one full-length collection of poems and four chapbooks, and is the former editor of Raccoon, Outlaw, and Ion Books. He lives in Memphis, Tennessee.