A Certain Strain of Wheat 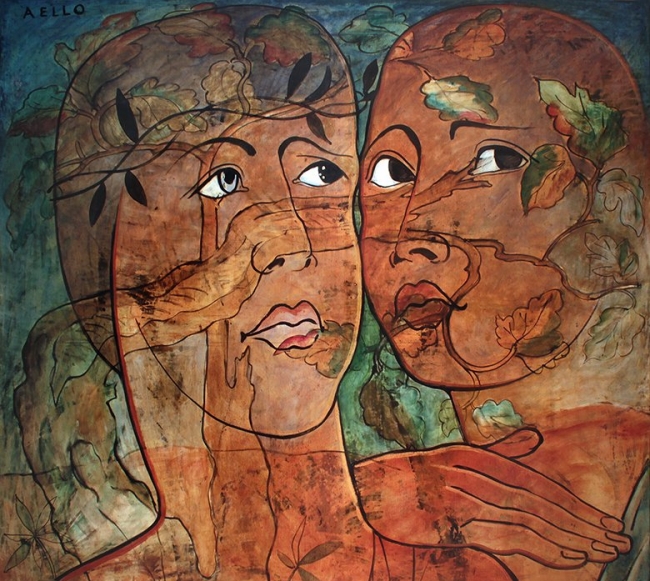 Even vegetation did it.

About ten thousand years ago, in the Mideast, a certain strain of wheat made agriculture possible by crossing with goat grass and thereby doubling its number of chromosomes to twenty-eight. Imagine it: two plants coupling on the sly.

No, there was no need for reprisals of the self. None whatsoever. That he knew.

Emmer was the name of the wheat. Other than that, there were only three things he was sure of. One, he had always wanted to be the first poet in outer space. Two, he was a poet but not an astronaut. Three, she was in England and he was here.

Of course, he supposed a case could be made for his being in outer space from time to time.

Anyhow, the crucial thing was that she was in England and he was here. He hoped he hadn’t burned too many bridges behind him. Optimism at a time like this was as good a stance as its reverse. Like most things, it was a matter of saying the hell with it. He chose to be optimistic.

Translated, that means he picked up the telephone.

Imagine, a whole minute just to make a decision. Nine to act on it, or to think of excuses for not acting on it.

He knew immediately it was her, from the throatiness, from the slight hesitation. That was the problem, she had always hesitated: sex, decisions, paying monthly bills, replenishing the toothpaste.

That was typical. Self-interest. What about him? Was she not the least bit interested in him? After all, she had the kids, the cat, the DVD player, the antique table with his initials carved in the leaf. Freely given, a post-partum gift from him to her. And it had been only a matter of months.

“No, not England,” he said, giving way once more to her determined sense of self-regard. “Only here.”

“Because they’ve launched already, all of them, none left for you.”

And oh, how very much newborn disinterest she could pack into a single monosyllabic word like oh.

God have mercy was all he could manage to himself. And God was utterly out of the question.

“Terrible,” he said, pausing for effect, for it to sink in fully.

Christ, had she really asked him that? Or was it the usual excess of ear wax he was prone to? And all because he had swum once too often when he was a kid and gotten an infected ear, twice.

“Mine have shrunk to the size of golf balls, that’s what’s wrong,” he said in his best bass voice.

Or had he? He couldn’t tell. Well, if he had in fact said it, that was an improvement. And so were his looking like golf balls. One step up the ladder of evolution in his case.

“Donald, the kids send their love. And Auntie, too.”

Depression: he hadn’t in fact said his had shrunk to the size of golf balls. He felt like crying. Maybe he would. But would it help?

“MY LOVE BACK,” he barked, stressing the three syllables in the best tradition of the triple spondee.

Then this: “Darling, can’t you come here?”

Ah, a brilliant stroke, that! Come there. Just step into the old molecular dissembler, Captain Kirk … and poof!

“Kimberly,” said he, our galactic hero, gently and with infinite guile, “Coming in any sense of the term is out of the question. You know that.”

“Coming? Oh … coming, I get it. Oh, Donald, you are simply smashing when it comes to words. You know, I always admired you for that.”

How was he to respond to that and keep his heroic aloofness? That was important. He was about to experience the cosmic orgasm of all time, and he wanted to do so within a vortex of absolute primal purity. He could not for a moment admit that her puny ego-strokes had any importance, or for that matter, meaning, in such a noble moment as this. No, that would never do. Dying was the last and only good fling he would have. If there were any biographers left after the releasing of the seeds to discover him, as he was sure he hoped would happen, then the climactic moment must not be mislaid in a rubbish heap of useless compliments. Especially from her.

How dare she, after having left him because of “those goddamned poems,” praise him by making use of what she despised. Not for the affairs, the harmless and for him amoral mayhems of a few immoderate moments no one would think worth remembering, let alone mythologizing. No, not for those, but for the wonderful warm womb of words without which his whole life had all the prospects of a penis spread out on a chopping block. For her they were the enemy, the Jezebel out pimping for whatever she could get.

No! A thousand times no! How dare she.

One minute and counting…

Besides, he still would like to be the first poet in outer space. And he was about to be. No, that was incorrect. His atoms all mixed up with those of all the other poets. First-rate poets, second- and third-rate poets. And those not worth a molecule. Still, he could live with that. Much better, in fact, than he ever could a woman. Particularly this woman. By Jesus, the poem he had written years before, titled naturally “On Being the First Poet in Outer Space,” was about to become true in an even more universal sense than he could possibly have foreseen.

That was it, then. That was the only reason he had called her. So she could hear his barbaric yawp as it sounded over not the rooftops of the world but the world itself. Yes, the whole world. O Whitman! O Milton! O Dante! O Duckworth!

“Seven years I listened to your shit,” he listened to himself saying, “and took it, even your leaving, without a single witticism, a single syllable of protest…”

And he actually was saying it. Yes, at last he was in fact saying it.

“Well, D-a-r-l-i-n-g, I want you to know, now, as I vomit years of nodules of nothingness across the miles and through a satellite high above the snotgreen sea and into a telephone and into your ear, that…”

“Yes, of course it’s true,” he assured her in his most spondaically savage, mono-syllabically vindictive vox.

“Donald! Auntie just said the PM has broadcast that the Chinese and Americans have neutralized them, made them fall into the ocean. Donald, we’re saved!”

We’re saved? Not quite. She was, he wasn’t. Ah, the horror, the horror… To have come so close, and to have lost. There was to be no cosmic mushrooming upward toward the universe, each molecule of him a little parachute adrift forever in the vast erasure of its mega-space. There was to be no zoot-suited biographers, their pens ploughing like snorkels through the ever deeper fathoms of his life and work. Oh, Duckworth! Poor, poor Duckworth! Weep for Duckworth! Weep!

And her? The final, fatal blow: she hadn’t heard a word he’d said.

What would he do?

What he would do was clear. He would dream night after night for at least the rest of his life of all those lovely, sleek missiles wilting like 3000 spent wheat stalks and dropping into an ocean of their own diluted and no longer necessary seed-semen.

And he would of course go to England.