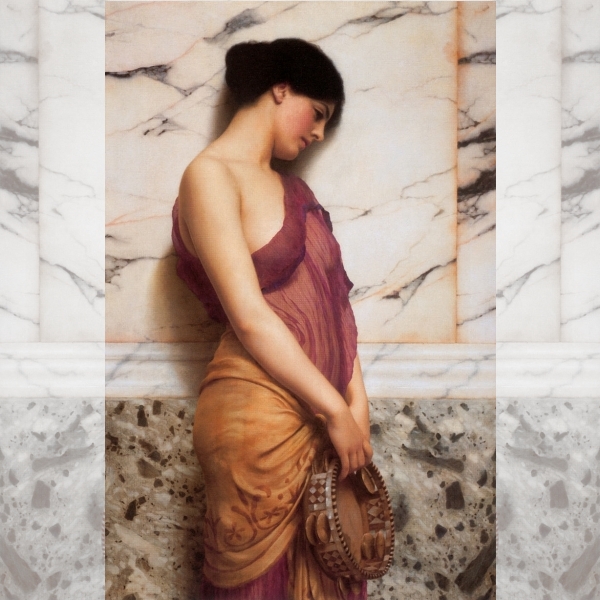 “The Tambourine Girl,” oil on canvas, by John William Godward, 1906.

Don Mumford’s on this track,
playing with an all-African band, Abdullah Ibrahim on sax,
on piano, running everything, and Don’s using his brushes,
wires like whisks, as if they’re one hundred hands,
that judo slap, but circular, like beating ten
ostrich eggs, serving up scrambled for a crew
in all black back from a gig that lasted ‘til six,
and what we’re all hungry for’s no longer silence
but that sound, sound of whisk, world turning
from darkness to light, streetlamp into summer hubcap chrome.

I taught Sally how to hit her tambourine on 2 and 4. So many pink people hit on 1 and 3. And she could sing like birds: like nightingale, like whippoorwill, like western meadowlark, her voice so pure, like dawn-light, like twilight, like golden vegas, streams of light, golden fingers from the clouds. She sang for God; she sang for the group. Our praise band met Thursday nights up near the altar at the church. I drug a djembe drum in at first, a ring of fur round that goat skin head, my hands red from keeping up, matching how loud they played, electric guitars. Sally was plump and petit, like my first wife, and her laugh was just as buoyant, bright. She shook her rump when she sang out front, and that was my view until the tunes stopped and she turned, and winked. She liked me, though I was engaged to a paralegal in the city. Here in the suburbs things moved slower. I lived in my parents’ basement, bathed in monitor light, and sometimes the blue light of the TV. When my son was born, Sally showed up, all smiles. She held our son, and, like Rumpelstiltskin, I wondered if she’d wander off with him, and stomp when we called her true name. It’s true, I had a crush on you. It’s true I never told you. When the church put up a softball team, I played. Slow pitch, I threw softballs from the mound, my hand and arm arcing up, the ball falling quick to bottom out, smack plate, the only trick throw I knew. Sometimes, Sally caught. Squatted, I could see her huge breasts, round as the ball, bigger. I tried to keep my nerve, throw right into her mitt. She chuckled when she caught me looking.