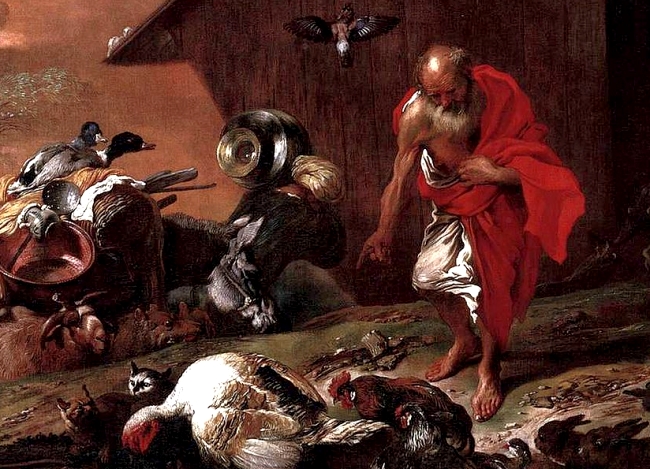 “In Front of Noah’s Ark” (detail), oil on canvas, by Giovanni Benedetto Castiglione, circa 1650.

An actor actually broke a leg, intent upon the pleasure
of the audience, like Cortez and not Balboa,
staring second toward the sea.
He’s dipped nightly in Lethe,
lost in the fickle maintenance of clutching tightly to himself,
or who he might be, or who he thought he was, or is.

They swarm the field, the Panthers and the Jaguars,
each seated with protective gear and the falsetto tide
of the spectator’s howls. Positions are filled, each fills a position:
a running back captures days from quarterback nights,
cuddling the piecemeal pigskin purpose.
Along with Christmas and elections, this passes for ceremony.

Have you googled all the mysteries, Karen?
This isn’t a Pacific Theatre.
Watch the choreography of victim blood
splattered cold against the moon.
These roller coaster thrills unveil the anatomies of flat, projected men,
animated amid the black suspense of plot and tone.

Don’t worry son, people are forever plagiarizing.
Don’t worry son, your wife will know how it goes.
Don’t worry son, there are no ghosts in Los Angeles.
Movies don’t taste like popcorn. Cats aren’t idols.
Just don’t trust anyone over 30. Finish in one night.
Get drunk and wander the streets. Take Karen with you.

I had mine already, but thanks. See, now I’ll
put on a cowboy hat and shame you into listening. Then, when I
flip the off switch, you’ll see how different this neighborhood looks. I’ll
tell you that every city block has a different dialect, and you’ll
tell me that the yuppies might wake up.
No one wants that.

*
The Days of Noah

And on the third day, the ark fell apart.

Multitudes of gopher planks,
cuddled so long together
with Elmer’s and painter’s
tape, could no longer bear

the sight of one another: lovers
after a row. A ghost ship, mostly.
Holds and brigs, roiling with the mates
of lost flocks, prides, and murders.

Then, face to face, the dove, so long
awestruck by the receding flood,
and the lion, so very close to knowing,
adoring, the vessel’s architecture, understood.

David Tuvell has written poems for the New Orleans Review, Steel Toe Review, NYU’s Minetta Review, KSU’s Share, Eyedrum Periodically, and other publications. His English B.A. comes from Kennesaw State University, and he studied substantially at the University of Florida. Outside of poetry, his path has been quite various, and David has made his way through things like software engineering, information science, and labor.