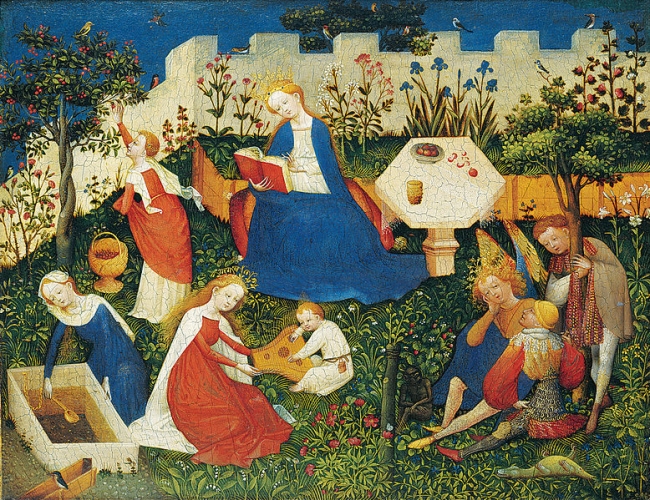 “Little Garden of Paradise,” tempera on wood, by The Upper Rhenish Master, circa 1420.

The Abomination of Good Cheer

The Dutch settlers now are
largely forgotten. The Van Burens
and Roosevelts seem almost
quaint, just a memory like Anastasia and
the Tsar; there aren’t even any photos.
One thinks of churning butter or, perhaps
of FDR’s stuffed bird collection, or maybe not.

It was a long time ago when the Dutch
occupied the Hudson Valley; even
longer when they built their fort
on lower Manhattan. Who cares?
We dream of holidays
in the South Seas: topless
girls and venereal disease.
Melville prevails.

But cheer up. There’s nothing wrong
that a little life can’t cure.
Think of sunflowers, think of John Coltrane,
not boll weevils. Remember the Alamo,
not the Holocaust.
The American dream carries on,
ever-expanding, evolving. The
Dutch came and went. It’s all been
left in good hands. We stand
now blindfolded, ready to walk
the plank. The pirates are not
simpletons. They’re brothers and
sisters; they’re gung-ho; they just
want justice. Let the purge begin.
We’ll declare ourselves obsolete. Their
leaders read the comics; their rallying cry
is familiar: quack, quack, quack. Is there
anything more cheerful than a duck on a mission?

It must be thrilling to know everything.
Girls used to be so full of doubt but now they say,
Sure I’m sure. I say 1970, she says Nixon bombed Cambodia.
When I was a kid I found a brontosaurus under my corn flakes.
Today I get all of world history at the end of my tootsie pop.

The bodies, you cry. The dead bodies in the lobby.
Why can’t I reply, my mother’s violets in the window box
Remind me of tiny flamethrowers.
The poor don’t need money. It’s the rich who are always short.

Everywhere I go, I’m an unknown quantity.
Why do you invade my territory?
They bring me hot dogs when I order origami.
In China they begged me to stay, but here, why won’t you go?

Don’t ask, how are you? It’s an intimate question.
I think it is privacy and so do you, but here it’s a matter of public policy.
Infants wear reading glasses to mommy and baby English classes.
You are in another country

When students dance into class wearing chiffon tutus.
They hide their hair in green.
One student’s yellow toenails match his glasses;
Another’s braces are as sparkling as her tiara.

On trains, the girls don’t keep their legs together. One sees
Bandaged knees and little hands spreading skin cream.
The Santa Barbara coffee shop in Roppongi brews no coffee;
It serves poached eggs on a bed of lettuce.

Paradise is demanding.
The bodies pile up to my Adam’s apple.
My daughter’s into cranes and pandas.
Are we punished for ignoring corpses?

Must I feed the neighbors, take care of tornadoes,
Split the atom, and make ice cubes?
I can barely add 2+2. I can’t remember to change my socks.
Last week I lost the Empire State Building.

I want my teddy bear.
Can’t I like pandas, too?
Thou shalt not kill.
Is that not enough for you?

The busker asks for what’s left over.
Must I share?
I have lots to spare but none for you.
Why can’t I say that?

David Lohrey graduated from U.C., Berkeley. His poetry can be found in Softblow, The Blue Mountain Review, Otoliths, Cecile’s Writers, and Quarterday. In addition, recent poems have been accepted as part of anthologies published by the University of Alabama (Dewpoint), Illinois State University (Obsidian), and Michigan State University (The Offbeat). David is a member of the Sudden Denouement Literary Collective in Houston. Recent fiction can be read in Crack the Spine and at inshadesmag.com. He teaches in Tokyo.