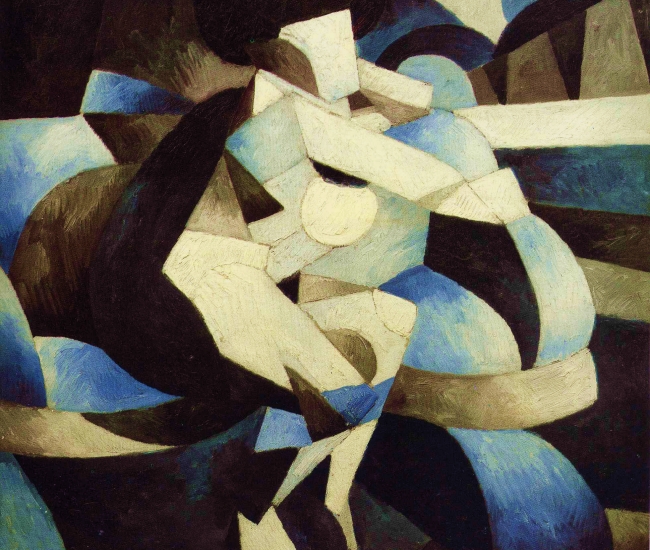 Low Horse on a High Road: Variation on a Theme by Gershwin

Too much of his meagre allocation having already trickled
through the sphincter of Time’s unforgiving hourglass,
a lawyer—a non-practicing Jew improbably named Julian Capstick—
is surprised, on his 58th birthday, to find himself
wandering the empty aisles of a Superstore at midnight,
a green plastic basket slung over his arm like a bag lady’s oversized purse.

Julian Capstick finds himself in this inauspicious setting,
beginning to provision what remains of his life.
A little drunk, a little sad, a little excited, a little fearful—
his senses assailed by Superstore’s fabric softeners, its over-bright
over-the-top fluorescent tubes and its sound system’s light,
jazzy treatment of Morrissey’s Suedehead—
Julian Capstick
knows
he
has
taken
an
irrevocable
step.

Beth, You Is Not My Woman Now.

There is much to show for the day, viz:

(a) A one-bedroom at Triumph and Pandora—leased for six months,
the damage deposit and first month’s rent paid in full;
(b) A sage green couch, hard as blazes but attractive to the eye—
purchased and delivered; and
(c) A mini-stereo with CD player—bought, set up on the floor and working.

It had been a precipitous departure after breakfast.
After the Mother of All Arguments with Beth.
After the Respectable Capitulation.

Julian Capstick rode out of Kerrisdale on his low horse, travelling light.

To his name now, beyond today’s purchases?
The things he could stuff hastily, under supervision, into a big, blue,
crinkly IKEA bag on his way out the door on a frosty December morning, viz,
Miles Davis and Gil Evans’ Porgy and Bess (the CD); an air mattress;
his signed, first edition of Under the Volcano; a travel toiletries kit; three suits;
a handful of socks and underwear; an overcoat; his cellphone; his access card
for the office. And the clothes on his back. And the shoes on his feet.

Now this new bounty: A spatula, a shiny stainless fry pan, a jumble
of cutlery. Toilet paper, half a dozen eggs, some bread, some butter,
some orange juice. Olive oil, Dublin white cheddar and a cheese grater.
A little acrylic thing that grinds both pepper and salt at the same time. (Brilliant!)
Paper towels. Windex. A plate and two bowls.

And a shiny new diagnosis.

Semicolon, the movie. Coming to an operating theatre near you,
Julian Capstick—an epic treatment of a modern classic with a
mystery ending.

Perhaps Mobius can distinguish endings from beginnings but,
as he approaches the only checkout open at the Superstore in this
surreal-sidereal-dreamlike moment,
Julian-Capstick-with-the-unruly-hair cannot.

“As he approaches the only checkout.”

Julian Capstick is surprised to find a thirty-something demi-goth
working the cash register. She bristles with piercings and attitude
and is leaking rap vernacular. Plainly not the President’s Choice.

“Wassup?” she asks, looking over his odd assortment of purchases
with an arched eyebrow.
“Preparing for a camping trip,” he replies with what he hopes
is heavy irony.
“Yeah, right,” says the oh-so-predictably-dymo-label-identified “Chloë.”
(Who knew a dymo-labeller could do an umlaut?)
Her green eyes have Julian Capstick pinned firmly in place,
like a specimen butterfly pinned to a cork board.
“You really look like you could use some cheering up, man.”

Back at the new apartment, Julian Capstick has placated his stomach
with a 2:00 a.m. omelette. Light-headed after blowing up
the air mattress, he begins making a list. Next to cancelling
his missing Mastercard (done), soap products are top of mind.
Having had to first dig a coarse black hair out of the
stubby bar left on the side of the bath by a former tenant,
Julian Capstick has discovered that hand soap is a poor substitute
for dishwashing liquid.

In the dim kitchen light, he continues writing out a list on the back
of his receipt from the Superstore, using the blunt pencil
located alongside a twist-tie, far at the back of a drawer gritty with
another’s spilt salt, pepper and cumin:

Still a little fearful, still a little excited,
still a little sad, still a little drunk,
Julian Capstick—masterfully discredited by
a sly checkout girl’s sleight-of-hand—
extinguishes the dim kitchen light,
dries himself with paper towels after his shower
and gropes his way in the dark, past the sage green couch
and the mini-stereo, toward his new bedroom.
He lies down on the gradually deflating air mattress
and pulls his familiar old winter coat over himself for warmth—
right up to his chin the way he used to do with his sleeping bag
on other, shorter, camping trips, long ago.

*
At the Corner of Triumph and Pandora

For those who know East Vancouver, Triumph and
Pandora Streets run in parallel. Thus the pedants among us
can be expected to spring to their feet at the first mention
of the “corner of Triumph and Pandora” and protest
that those streets never converge:

“There can be no ‘at the corner
of Triumph and Pandora.’”

But a writer, in this one particular, resembles a Manager of
City Works with a free rein and a framed Poetic License
perched on the corner of his desk at City Hall. A writer
can make things happen through writerly alchemy.
With a few keystrokes—and without the need
of a work order, budget or authorising minute from
city council—a writer can reconfigure this city’s street plan
such that the smug swagger of Triumph, and the street-wise,
“careful what you wish for” sly assurance of Pandora,
are forced to confront one another at right angles:

“There most certainly can be a corner
where Triumph and Pandora intersect.”

Pandora holds out her box: “I dare you.” Triumph puffs
himself up, struts about a little, approaches, then hesitates.
The corner of Triumph and Pandora is a place pregnant
with possibilities, some dark and some not.

There’s a man you haven’t yet met called Julian Capstick.
He’s a refugee from Kerrisdale. At 58 he began his life anew
at the corner of Triumph and Pandora.

What you don’t know—because no one has yet told you—
is that Julian Capstick now lives contentedly enough and
cancer-free in London. He lives there with his second wife,
Gemma, in a beautiful flat in a beautiful, red-brick,
Edwardian building called “The Rievaulx.”

The Rievaulx has a creaky, three-person cage lift operated by
a nonagenarian called Laurence May who lost his right leg
in WWII. Or was it his left? After 94 years, Laurence still
struggles to pronounce his r’s. But he knows all the residents
by name and he always has biscuits for their dogs.

Just as Julian and Gemma (and Laurence May) cast no
shadows, neither does The Rievaulx. And when Julian and
Gemma step out to walk their whippets—Haji and Vita—
neither they nor their dogs are reflected in shop windows
or puddles as they pass by. Nor is there a pedant anywhere
in sight to notice (or not).

P.W. Bridgman writes short fiction and poetry from Vancouver, Canada. His stories and poems have been published or are forthcoming in The Glasgow Review of Books, The Moth Magazine, Ars Medica, Litro UK, Litro NY, Praxis, Grain, The Antigonish Review, The New Orphic Review, London Grip, A New Ulster, Section 8 Magazine, The Mulberry Fork Review, Aerodrome and other literary periodicals and e-zines. You may learn more about P.W. Bridgman by visiting his website at pwbridgman.ca.