Two Arms and a Leg 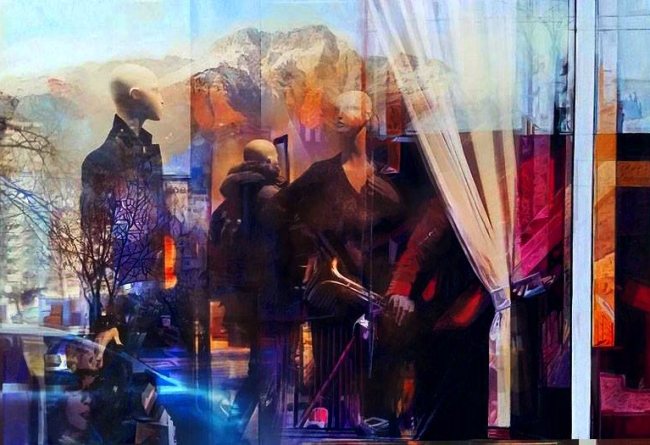 We split her up by dropping names into a hat. I got both arms, Paul a leg, Ryan the head, Matt the other leg, and Drew the coveted torso. Then we split for our various cities, Paul and I to New York, Matt to LA, Ryan to Boston, and Drew to London. We texted frequently, sent each other pictures of ourselves with our parts at home or out at a bar. When Paul and I met up for drinks we usually found our way to the center of attention, two arms and a leg splayed across the table in front of us.

“What’s that?” people asked, and we took turns telling the story.

We’d found her during one of those ecstatically clear morning sessions when the air is crisp and the sun is bright and the skin of the world stretches on and on and on. She was shoved behind a urinal beneath the football stadium, homecoming sophomore year. Drew saw her first and called us over. Or maybe it was Ryan. Life-sized, fully articulated, burnished a deep reddish brown.

Matt said she was bad luck and we should burn her. Instead we brought her back up into the stands and poured drinks over her shapeless mouth.

“No that’s my girlfriend,” said Ryan. “And she’s visiting me.”

That night, we brought her back to the house and outfitted her with a letter hoodie and basketball shorts. Our Recruitment Officer agreed to waive the pledging process and from then on, she was party to all house activities. She spent afternoons with us on one of the common room couches. She came outside to watch while we played cornhole on the lawn. In the summer she waited patiently while we went home to work as painters or interns, each of us holding our breath until we saw her again in the fall.

The day before graduation, we gathered in the backyard and went about taking her apart. We laid her out on the grass. I held her arm. Drew pressed both hands against her torso. Ryan had an axe from someone he knew at the Office of Physical Plant.

As usual, we’d been drinking.

Ryan raised the axe above his head and swung it at the pin that formed her shoulder. My hands vibrated, and suddenly I was holding a dismembered arm. I watched while Ryan hacked off the other arm, both legs, and finally her head. We went inside with tears in our eyes.

Before too long it seemed like we’d forgotten how to talk about her. Ryan came to visit from Boston and, sitting together in my apartment, we struggled like the children of immigrants working through the mother tongue.

“Arms and a leg,” said Paul, and we shared a reassuring look.

The next fall, Matt started journalism school and joined us in New York. Paul and I helped him unpack his things, racing with excitement as we sliced open boxes. But the leg wasn’t there.

“Where’s the leg?” I asked, and Matt gave us a sheepish look.

He made a show of searching, but we both knew there was only one explanation; at some point he’d finally given in to temptation and burned it.

Drew got engaged to a girl from Spain who was in London for grad school, and he asked us all to be groomsmen. We rented a house in Madrid. We exulted. We were back together, undistributed.

The night before the wedding, we went out in Maravillas, stumbling from calle to calle until we were red from liquor and smoke. Back at the house, Drew went into his bag and came out with the torso. He turned to Matt.

We were in awe. We felt affirmed.

Matt took the torso in his trembling arms and hugged it close as we laid our hands on breasts, on hips. We all went to our bags and removed our arms, the remaining leg, the head, and laid her on the floor.

The torso was already missing when Matt and I got dinner a few months later. Matt said there’d been a break-in, but I’m pretty sure he burned it, too.

I met Cara through a mutual friend. I waited for our second date to tell her about the arms.

“It’s kind of strange,” I said, “but they’re really important to me. And I need you to understand that.”

But she did! And after our next date she asked tentatively, politely, if she could see them. I brought her home and carefully lifted the arms from their hiding place in the back of my closet. I took one and I gave her the other. We could hear my roommates watching TV in the other room.

“These are beautiful,” she said.

I said that yes, they were the most beautiful arms I’d ever seen. I took my arm in both hands and raised it above her head and lowered it down behind her, pulling her close.

We got married and moved to Connecticut. The night before the wedding, Cara joined the five of us as we laid the arms, the head, and one leg on the floor. We imagined the torso and the other leg. We told each other she was still beautiful.

We had our first daughter not long after. Then we had our second. We moved to an old farmhouse farther outside the city.

We keep in touch, the five of us. We text; we talk at weddings. Cara will post a picture of our family on vacation, and they’ll all add comments. But sometimes I wonder why they never ask about the arms, if I ever climb up to the attic and take them out, skinned with mold and rough spots, and remember the day we found her, how it seemed she’d been left there just for us. Then again, more important things have happened to us since.