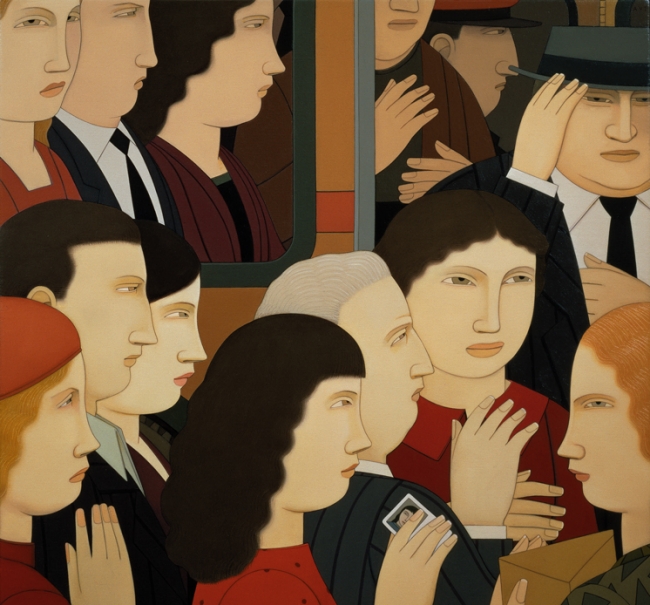 There’s a boy, and he does not speak. Dirty blonde and barefoot, he sits cross-legged in space. His arrival is unusual, but I have no fear. So in silence, I wait, until the moment comes when I can’t wait any longer. Then I scream, dance, cry, and laugh—outlandish pantomimes to break his silence, but still he never speaks. This ritual goes on throughout the night.

Three days ago a boyhood friend died. The news of his death, though not a complete surprise, disrupted my sleep. To be honest, I’m ill-equipped to handle any emotional problems beyond my own. So the news of his death presents a troubling situation to the fragility of my psyche.

Eric hadn’t crossed my mind in years. In fact, I didn’t realize I’d had any lingering feelings other than a few withered childhood memories until a one-sided conversation with my mother reminded me of the true depths of my baggage.

My mother became a skilled emotional assassin after dealing with thirty years of my bullshit. The post-call silence remained for a good minute before I could commit any grief to the news of his death.

After the call, I sifted through the local news until I found his obituary. I knew enough to know when it says “died at home,” and the deceased individual had a history of internal struggle, only two options existed. Eric overdosed or committed suicide. I made a few calls, old friends, awkward conversations. The talks were brief and unwelcome. Eric had hung himself with the electrical cord on his vacuum.

“He had issues,” an old classmate confirmed.

For years I’ve counted on my own obituary reading, “John Doe died at home, alone.” Up to this point, I’ve avoided this prophetic, morbid conclusion, though I’ve tried my damnedest.

The hour drive from the airport unravels a mass of childhood memories. Overhead weather approaches. The winters in the Northeast always threaten. If you want to kill yourself, winter is the perfect time of year, bleak and dirty.

When you haven’t been home for a decade or more, there’s a reason lurking somewhere. And mine huddles under a pile of excuses called failed adulthood. The closer I get, the more uncomfortable I become in my skin; annoyed with the seat belt touching my neck. Frustrated with the rolled collar of my shirt and baffled by the fluctuating temperature.

It’s another thirty minutes and a wrong turn before I come upon the intersection where Eric and I caught the bus as children. Time to park the car and walk.

Tug Hill is a stretch of road from the bus stop to my old house. I assume it’s still called Tug Hill today. The single-lane gravel road connects the memories of Eric and me, our consciousness. From sixth grade on we walked home together, and I hung on his every word. There were none of the usual conversations. Eric’s words, hushed and intense, harbored a secret. Something he explained one day in a voiced filled with confidence.

“I’m a superhero,” he said, “with an underground hideout.”

He sketched an imaginary map in the air with his fingers as he spoke.

There was no hesitation in his voice. And his facial expression remained faithful.

Eric lived in two worlds, one where he was a human punching bag for an alcoholic father and another where he was a savior. He spoke of his lair with incredible detail—from the color of the buttons on his costume to the number of rings on the ladder leading to his underground hideout. And I believed every word because I wanted it to be true for Eric. If his home life wasn’t tragic enough, school life was troublesome. I saw this first hand, the ridicule over his odd, reclusive behavior. I never heard him speak to anyone beyond a simple yes or no, or raise his voice to his tormentors. When I was eleven, I thought we’d be friends forever, and one day he’d share his secret life. I’d thought of us as partners, a Batman and Robin relationship. And someday that life would become my escape.

There were five of us who caught the bus at the bottom of Tug Hill. There was DJ, who once told me he’d seen a doctor because his dick was so large he couldn’t get hard. After our conversation, I’d spend the following week peering into my underwear. Maybe it was contagious. It was not.

There was Jeff, who I pretended to drink Vodka with one day on the way to school—taking swigs but not swallowing and then developing what I deemed a proper stagger for a drunk. Back then I hated the taste of alcohol.

And there was Ronald—the newcomer. He left scars. On the days he bothered to attend school, Ronald made my life hell. A full on chase ensued the moment I stepped off the bus, and it didn’t stop until I reached my front door. Ronald was a large boy with a body resembling a fleshy ape. Rumor around the school was that he had failed a grade or two, which explained his impressive physical attributes for a sixth grader. The remaining two were Eric and me.

Twenty yards from where I park the car, an unshakeable chill descends upon my bones. I light a fresh cigarette and pull—inhale until I become lightheaded. There’s something surreal, being in a place that holds your childhood memories hostage. As if time preserves them until you return one day to claim ownership. The further I walk the gravel road the more I let go.

I now realize Eric had no value at home or school, so he developed an alternate identity. I count the telephone poles as they approach. Houses constructed between one and two change the landscape. I tug hard on the cigarette, filling my lungs with frigid air and nicotine. Somewhere after my fifteenth birthday, Eric had become irrelevant. The other Tug Hill kids gave me flack. It was no longer cool to be his friend.

The closer I get to pole number three, the higher my heart rate climbs. Eric opened his soul, and I abandoned him, just as I had everyone else in my life. I didn’t have the strength to fight for him.

I chip away at the frozen gravel with the point of my shoe. Poles four and five are in view.

I pause and imagine the likeness of a young boy. Eric: alone and waiting for me to join him. After a few minutes, he turns with a sheepish look, dragging the eyes of everyone at the Tug Hill bus stop in my direction. The pressure to expel him erupts, and cackles from the peanut gallery break loose.

At fifteen I succumbed to the peer pressure. “Go on,” I had shouted. “Leave me alone.” Eric continued his walk alone, and I never spoke to him again.

I’ve reached pole five and find myself in a full-blown panic. My breathing is fast and undisciplined. My hands, blotchy and tremulous, spill hot ash from my Marlboro Red onto the fresh snow with a soft hiss. Numbness spreads across my face and lips, my chest spasms with sharp, crippling pain. The world around me spirals out control until I fall into a dreamy darkness between telephone poles five and six. I land face first in the snow.

From where I lay, I see a boy, and he does not speak. Dirty blonde and barefoot, he glides across space and takes my hand. Fifteen years later it’s settled, and I am nothing.

R. E Hengsterman is a writer and film photographer who deconstructs the human experience through photographic images and the written word. He writes under the beautiful Carolina sky. You can see more of his work at ReHengsterman.com and find him on Twitter at @rehengsterman.