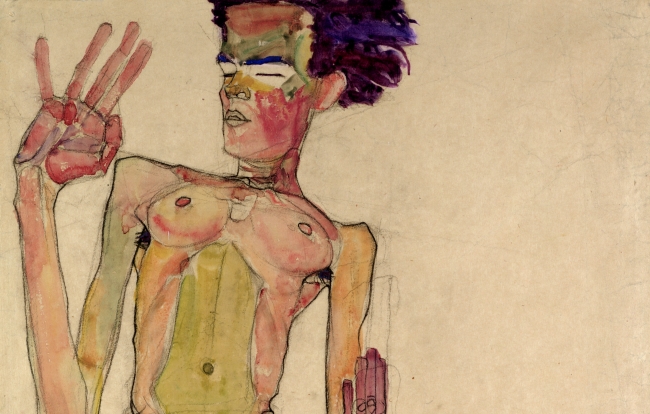 “Kneeling Nude With Raised Hands,” chalk and gouache on paper, by Egon Schiele, 1910.

The editor shows me to the door. I enter the hallway realizing I got the job. I was walking on air from the moment I left the elevator, all the way to the IRT subway station on 23rd Street. A blast of heat greets me when I reach the platform. July in Manhattan is hell and worse down in the underground. Last week, The Post ran a story about temperatures of several stations, and this one ranked as the third worst, clocking in at 99 degrees. By the time I settle down in my seat on the bench next to the brand-new wrought iron gates, rivulets of sweat drench the lapels of my sport coat.

I loosen my tie, undoing the top two buttons of my shirt, upset the collar was perhaps ruined. I bought the shirt yesterday on Orchid Street with the last twenty dollars from my unemployment check. All that remained now was the fifteen in the bank, and the five I started out with this morning. I spent half for the subway, and the change went for the breath mints I crunched in my mouth during the ride up. This left me with the two greasy bills wadded up in my jacket pocket, a reminder of my luck before today.

Since I was under the minimum at the bank, the two dollars was all I had until my first paycheck unless I find money on the street, which is unlikely.

I moved to New York in the late 80s, the worst time to arrive there. Editorial jobs, once plentiful, had shrunk to less than one column in The New York Times help wanted page. In my foolish arrogance, I believed I’d land something in my first month. Five years experience as an Associate Editor for a city weekly in Texas, where I got two nominations for journalism awards, plus having clips from Xeroxed punk rock fanzines and Spin, should have been enough for the various headhunters, personnel directors, managing editors and flea-bitten community weekly publishers to jump at the opportunity to hire me.

After a group of piranhas from upstate bought out the magazine, they fired the entire staff.

I collected unemployment while desperately seeking another position. After eleven months of having more of the same: slammed doors, unreturned phone calls, and dealing with snotty Ivy Leaguers more interested in the supposed albatross of my last two years as a pornographer than the two nominations for hard-hitting journalism, I received my last check, my name and address on the stub crossed out, an exclamation point for the latest sentence of my desperation.

So here I am looking at yet another bottom-feeder position in the stew pits of the publishing slagheap. Same job as before, with slightly better pay. Anything is slightly better than zero. Not what I intended to begin with, but I’ll take staring at hundreds of pages of bad alliterative prose and innumerable slides of not particularly attractive women eight hours a day versus sitting in my apartment listening to talk radio and feeling sorry for myself. I’m even thinking of writing again. With a computer in front of me, I could use the downtime wisely and perhaps write my way out of this job.

When the train arrives, screeching into the station, I admit this was exactly what I was thinking the last time. The cycle begins again.

The train doors close and I remember Bruce Springsteen’s line off  “Open All Night,” “Hey ho, rock and roll, deliver me from nowhere.” The treadmill of existence, I thought while running my fingers through my soaked hair, has its place for me.

The sudden shock of the air-conditioned car gives me a headache, and I feel queasy. It is two o’clock, the car happily half-empty. I sit down, leaning against the railing, staring at my reflection in the plate glass of the doors opposite. I’ve grown up and older in my years here, my face has filled out, gone are the high cheekbones. My hairline lost an inch and the gray was coming in clumps. I look down to see my stomach turning into a representation of an Iowa Indian burial mound. I’m falling apart at the seams. I make a note to start working out again once the money rolled in. Join a club, work out twice a week, and at least get rid of the paunch. I understand if I couldn’t renew myself spiritually, then doing so physically would have to suffice.

I chortle silently, putting my hand over my mouth. I soon lose myself in the rumble of the wheels churning below, and closed my eyes, wishing for a way out of this situation.

There were no messages on my machine when I arrive at my apartment. I wasn’t expecting any. I call Eddie at his work and ask him for fifty to tide me over for the week. Eddie says sure, telling me to meet him at the ATM near his house at eight that evening. He congratulates me for landing the new job. I appreciate his sincerity.

I place the receiver down, relieved I’d taken care of the interim. I go into the closet, pulling out a wrinkled gray suit. I take off my shirt and pants, changing into a pair of faded jeans and the black t-shirt I drag from the pile of dirty clothes jammed in a corner of my bedroom. The Chinese laundry on the corner did work overnight as long as I delivered the clothes before three. I gather them and step down the worn stairs, getting to the Laundromat with fifteen minutes to spare. I return home and sit on the bed, turning the fan toward me, lying back on my pillows, finally relaxed.

I was to be at the office tomorrow at nine-thirty. I guess the first couple of weeks would be easy: the get-acquainted sessions with my new coworkers, the training on the computer system, the endless questions about copy flow and style, the development of a new routine—the usual mess associated with my new condition.

I’ve done all of this before. I’m a quick learner, and the added motivation of being so recently exasperated both financially and professionally guaranteed I’d be superlative. I expect to impress everyone with my skills, but am planning to hold back a bit, as I generally have before. There’s no reason to shake the tree so early, as I learned back in the days when I thought I was smarter than I turned out to be.

Those days were long past, beyond the point of sentimentality.

The headache fades to nothingness, only a memory. Like everything else I’ve experienced in my life.

The heat in the apartment was appalling, even with the fan. Under its tyranny, I grow tired and quietly drift off to sleep.

In my dreams, I finally won an award. I give a good speech and when I finish, the audience applauds enthusiastically. My parents are there, tears streaming down my father’s face. I could tell he is proud. My editor envelops me in his arms, hugging me tightly. My face tensed into an unbroken smile, my hand sore from grasping the plaque and the many handshakes at the party afterward. A photographer with the Associated Press snaps my picture, and I receive offers for work from several major newspapers. I have reached a new pinnacle in my life, and am ready to conquer new mountains.

I meet Eddie on time, collecting the money. I sleep well that night, dreamless. Wake up early, pick up my suit, arriving at work a half hour early. The first day went better than I expected; the other employees turn out to be friendly, the copy flow system sensible and the computers easy to operate. I knew before lunch I was going to be here for a while. I may be at the bottom again, but it beat starvation.

There was little to do after lunch, so I go through my new desk. A jolt runs through me the moment I open the bottom drawer. Probably left behind by my predecessor, the item was profoundly disturbing, souring an otherwise perfect day.

What I discover is a small treadmill made of red plastic. Its wheel bent in on one edge, with several of the bars broken off, yet I was able to turn the object with little trouble.

I consider throwing the damned thing in the trash. Instead I place it on the windowsill next to my desk. Reaching out, I spun the treadmill, my psyche bruised, my mind teeming with a newfound, belated awareness I wish I wouldn’t consider. However, I cannot avoid being mesmerized by its languid movement.

Mike Lee is a writer, editor, labor journalist and photographer based in New York City. His short fiction is published in West Trade Review, The Ampersand Review, Paraphilia, Reservoir, The Avenue, Dime Show Review, The Corvus Review, The Roaring Muse and others. His website is mleephotoart.com.