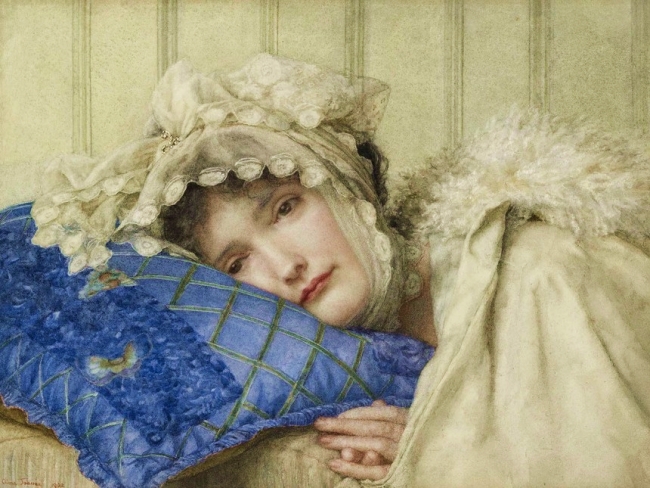 “Girl in a Bonnet with her Head on a Blue Pillow,” watercolor on paper, by Anna Alma-Tadema, 1902.

by Horacio Quiroga
Translated from the Spanish by Peter Robertson

Her honeymoon, when it came, induced in her the seed of dread. Not only chaste, but also meek, her husband’s unyielding character—like iron destroying stars—laid waste the firmament of her girlhood dreams. She doted on him, but felt prey to apprehension when, walking home together in the dusk, she would look at Jordán, looming above her. While he loved her unreservedly, he held his feelings in check. Since they had married in April, three months ago, they had not been immune to happiness. But she would have preferred that her life’s companion, his brow less lowering, would have given way to the free play of tenderness. Longing to express her pent-up emotions, his stony countenance deterred her always.

Their new residence was also to instill fear in her: the ghostly pallor of the patio, with its friezes, columns and statuary, conjured up a palace that had fallen under a spell and would soon be a ruin. Inside, the glacial brilliance of the stucco, all the way up to the dome of the ceiling, heightened the sense of pervasive coldness. As she hastened from room to room, as if fleeing some clutch of phantoms, the agitated refrain of her footsteps echoed throughout the entire dwelling.

All autumn, having renounced the illusions she had once cherished, Alicia resigned herself to sleeping within these walls, willing herself to oblivion until her husband returned in the evening.

To lose weight need not be a cause for concern, but she soon caught a chill which not only dragged on for days, but never went away. One afternoon, she mustered the strength to go into the garden, all the while leaning on her husband’s arm. Her eyes darted from one side to the next, in a state of utter bewilderment. Jordán, moved to tenderness, stroked her hair, causing Alicia to burst into tears. Throwing her arms up to his neck, she wept even more at the slightest attempt he would make to console her. Later, her sobbing subsided as, mute and inert, she continued to rest her head on his shoulder.

It was to be the last time that Alicia was able to get out of bed on her own. Waking the next morning, she felt that she was going to faint. Jordán’s doctor arrived and, having examined her, prescribed complete rest.

“I don’t know what to make of it,” he said in hushed tones, as he prepared to leave. “Your wife is certainly ill but I can’t fathom it, there is no sign of vomiting and, indeed, nothing to go on at all. If tomorrow she wakes up in the same state, do not hesitate to call for me straightaway.”

The next day, Alicia’s condition was even worse. Paying another visit, the doctor, more confounded than ever, diagnosed severe anemia. While his patient succumbed to no further fits of fainting, she was headed inexorably towards death. All day long, in the eerie silence, the brightly lit lamps invoked a spectral sentinel. By now delirious, Alicia slipped in and out of sleep. Jordán remained in the incandescent drawing room. He paced up and down, the carpet muffling his footsteps, before re-entering the bedroom to resume his futile vigil.

In no time at all, Alicia started to hallucinate, her eyes straining to focus on a phantasmagoria that hovered at first in the air, before descending to the floor, which she stared at unflinchingly. One evening, her face breaking into pearls of sweat, she did nothing other than fasten her eyes on a fixed point beneath her.

“Jordán,” she shrieked, rigid with foreboding and not for a moment looking up from the carpet.

He ran into the bedroom, his entrance prompting his wife’s redoubled screams.

She struggled to take him in, looked down again at the carpet, and coming to herself, smiled wanly. Taking hold of Jordán’s hand, she stroked it tremulously.

There was one vision that troubled her most of all, a creature that shapeshifted between the preternatural and the human, crouching on the carpet, and that hungered to meet her gaze.

The doctors returned to see Alicia, but to no avail. Before their very eyes, a life was ebbing away, as she became more and more enervated with every hour, and they simply had no idea why this was happening. In the course of the final consultation, Alicia lay there torpidly, each doctor taking her pulse, before making their way to the drawing room.

Shrugging his shoulders disconsolately, one doctor exclaimed, “Nothing can save her now.”

“That is all I needed to hear,” Jordán retorted, drumming his fingers on the table.

Prostrated, and as if possessed, Alicia’s life-force was waning. While her illness did not advance during the day, she would wake up in the morning, a swooning wraith drained of blood as she slept. On coming round, she felt as if a tombstone were pressing down on her. From the third day, barely able to move her head, this feeling of being crushed by a deadweight was never again to leave her. She was adamant, nonetheless, that no-one should even so much as rearrange the pillow. Her nocturnal terror bulked large in monstrous guises that dragged themselves towards the bed and clambered onto the bedspread.

Alicia lost consciousness, the last two days of her life eked out in plaintive moans. As if for a funeral, the lights were lit in the drawing room and bedroom. All that could be heard in the uncanny silence were Alicia’s woeful dirge and Jordán’s implacable footsteps.

She died, in the end. The maid, who entered the room to remove the bed sheets, glanced at the pillow, dumbfounded by what she witnessed.

Striving to compose herself, she whispered to Jordán, “There are stains on the pillow that look like blood.”

He made haste towards the bed, bending down to look. As the maid had said, on the pillow cover, on both sides of the indentation left by Alicia´s head, crimson patches could be discerned.

Inspecting the pillow more closely, the maid affirmed, “They seem to be caused by small lacerations.”

Jordán exhorted, “Lift the pillow up to the light.”

She hoisted up the pillow and dropped it suddenly. As bemusement gave way to horror, Jordán could feel his hair standing on end.

“What on earth is going on?” he queried.

Jordán raised the ponderous object, and then left the bedroom, accompanied by the maid. Placing the pillow on the drawing room table, he cut it open in one fell swoop. As the top layer of feathers fell away, the maid gave an ear-piercing screech. There in its lair, a bloated viscous mass moved its unwieldy tentacles.

Since she had been confined to bed, this loathsome apparition, its bite almost invisible, had attached its orifice to Alicia’s forehead. While the daily readjustment of the pillow had prevented further onslaught, its suction at night had been vertiginous, and in only five nights it had drained her of the last corpuscle.

Diminutive when found on birds, in other habitats these parasites can acquire outlandish proportions. Finding human blood especially appetizing, it is not unusual to find them in feather pillows.

Horacio Quiroga (1878-1937) was a Uruguayan playwright, poet, and short story writer. He wrote stories which, in their jungle settings, use the supernatural and the bizarre to show the struggle of man and animal to survive. He also excelled in portraying mental illness and hallucinatory states. His influence can be seen in the magic realism of Gabriel García Márquez and the postmodern surrealism of Julio Cortázar.

Peter Robertson is a UK author and literary translator. His fiction has been translated into several languages, and he has translated from the Spanish and the French, with authors including Jorge Luis Borges, Rubén Darío, Felisberto Hernández, Rosalía de Castro and Pierre de Ronsard. He lives in Argentina and Scotland.