Mrs. Mannerly Explains the Multi-Faceted Use of Tableware and its Social and Personal Implications 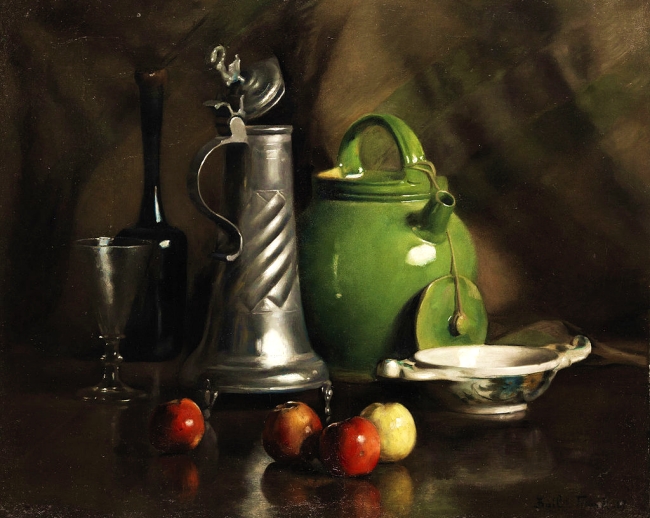 I have three sets of china that I did not select, having received them from women who lived before me. Two of the three are cabinet ghosts that whisper cooking instructions. They haunt the shelves because I believe they are too good to put in a box, but if I listen to my friends, they are too good to use at all, and I am wasting cabinet space. There is where all those willow trees and forget-me-nots must reside, evidence of a dilemma among the quality we expect, the quality we feel is an entitlement, and the quality we actually get.

One day a week I play Canasta with three friends. At first we took turns “hostessing,” which language-degenerated to “as hostess.” After that it went to “hosting,” and now everyone in popular culture uses “inviting people over” which just as well means “some people are coming.” The use of our better things has been lessened by the language of open-house and drop-in and bring-a-dish-to-pass. All these things have their place in the process of eating and serving food, but I grow tired of colorful plastic cups, disposable stemware (humph), and even Styrofoam cups. My Canasta buddies get their Orange Shasta in a crystal tumbler and I bring it to the table on a tray. Maybe 60 seconds to clean up, and they love it. We use coasters that once belonged to my mother-in-law, which are out of place in a decorative way, but useful.

I am almost old and I admit to being fully put off by disposables. They indicate a lassitude and waste that lessens the importance of one’s friends and familial bonds. Simply look at the ridiculous excess of a post-party garbage bag after people have taken yet another dish or cup for each use. Are your friends too coarse in their behavior to be trusted with a dish? Think.

Are you really saving the earth with your childish resentment toward washing dishes? Think more.

There is history and love in those chipped plates. A mother’s honeymoon. A bride’s wish come true. A grandmother whose son shipped home the first matching set in the family from Korea in 1954 (with money made on the black market from selling Leica cameras to the Japanese). So what if they are not “pretty” or your “style?” Someone you love treasured them enough to save them and launch them onto the port of legacy.  Don’t insult your elders. Or your family members. Or your friends.

Don’t have twenty-seven matching plates and forks? No one cares. Mix it up; buy some Corelle from Target. Hundreds of patterns available! Get an entire set from a consignment shop and make up a lie about how you came to have them. Very entertaining. You can store it all in a plastic box under the bed with a decent tablecloth and some pillar candles.

Just treat me like I deserve a plate. Because I do.

I had a sister-in-law who insisted on keeping a set of Styrofoam cups by the coffee maker and a completely empty dishwasher. During a lengthy visit, I went into her cabinet every morning, took out a cup, used it, hand washed it when through. Then I dried it and returned it to its place. I did not drink from a fucking Styrofoam cup. Passive-aggressive bitch, I am and I claim it. But I am an adult, and able to replace a cup from Dollar General. I am good enough for a mug.

I am almost old and I admit to being fully put off by disposables. They indicate a lassitude and waste that lessens the importance of one’s friends and familial bonds.

My paternal grandmother from our homeland in Lake Swamp, South Carolina collected dishes from laundry soap boxes until there were enough plates for no one to eat in shifts. We were good enough for plates and a sit-down all at one time.

I had a bit of a falling out with some sorority friends (in my head) who took my plates, stacked them on the counter, and replaced them with red plastic dinner plates on the buffet line. “We don’t want you to have to clean up,” they reasoned. Thank God they didn’t strip the table linens, too. They replaced my cloth napkins with the best possible paper ones.  But really, how long does it take to wash and fold a napkin and a table cloth? Don’t the cleaners do that sort of thing anyway? Later the trash was full of shit and overflowing. Afterward, I toyed with the idea of dragging the plates and cups and utensils out to hose them off before recycling them. Now that is work, and it is work that should be done. But I didn’t do it, and you probably don’t either.

Most people who are visiting a friend’s home expect to eat from unattractive disposable plates pried from a plastic stack. They expect to get a flimsy fork or maybe not; there are nice “silver” ones these days. (Don’t tell me you can’t tell the difference—what have you been eating with until now?)  Friends expect to drink from a can or a bottle, or maybe shovel ice from a “clean” chest into an overly large SOLO cup and choose drinks from liter bottles. No one gives or gets anything for anyone else, unless they are disabled, very old, or there are too many people.

Folks going to these get-togethers expect to “bring something,” which devolves into four kinds of chips, some dip, and a six-pack. (For an unknown reason, “hosts” will not assign specific items.) Maybe someone will go crazy and make chicken wings or brownies. Guests expect to “help clean up” by throwing a bunch of refuse in a bag, without emptying the cups in the sink, and depart with their leftovers. Some idiot tries to make us all vegetarians. I call this dismal. I say this is what we have come to expect and sincerely should not.

We expect no table-charm. No conversation about family history. No gesture of respect or trust in our guests by using the best we have for them. No expectation for having to make any special effort for a pleasing table. If your friends expect so little from you, does that make them better, or worse?  I do not know. Does that make you better or worse? Probably none of the above; most of us have chosen the casual path of sharing our homes and what is ours. These synthetic and poorly planned gestures are nothing but an anonymous space, a cluttered, overcrowded and probably wasteful table, some countertops, a place to sit, and a garbage bag.

My position: if your best is not good enough for your friends, or even your family, what good are you? Send the good stuff to me. I’ll use it for you.

Author shares a secret: If your china is not hand painted, a light rinse in the sink (which you do anyway) and brief wash in the dishwasher will not damage anything. But do not include any metal. So maybe you load two sets. One dishes, one flatware. It takes 10 minutes to load both kinds of dinnerware for twelve sit-down dinner guests. Lead crystal is done by hand.

Mrs. Jane-Howard Foster Mannerly is the recent widow of Mr. Robert Calhoun Mannerly IV, a prominent banker from Bluffton, Georgia, where they made their home and raised two children. Mrs. Mannerly holds a degree in art history from Agnes Scott College in Atlanta. She currently resides at the Presbyterian Home in Bluffton. Mrs. Mannerly was the Chairwoman and Principal Hostess for Bluffton’s Spring Cotillion for many years, having herself debuted in 1964. Mrs. Mannerly is well known for her crustless cucumber sandwiches, and is grateful to the tobacco and cotton industries for making her life full of deserved privilege. She plans to bequeath her entire estate to the Peachtree Historic Preservation Foundation and the Peachtree Land Trust, since even her own children have little appreciation for the finer things.