A few months ago I took an online class with my longtime mentor and friend, Laurie Wagner. It was called Story Slices, and it involved taking pictures with my cell phone and then writing short-short stories to accompany them. The stories could be directly related to the photos, or they could just be inspired by them. That was it: photo and short story. We weren’t supposed to worry about whether we were writers or photographers. We were just snapping photos and writing things to go along with them.

I loved the class. It came at a time when I needed a boost for my creativity, and Story Slices did this and more. I think what works best about Story Slices, for me, was that they are not so different from what I do on Facebook already. I post pictures and write captions, so the form is familiar. It only involves a little more thought—a little more effort to write something more than a caption, something more like a story. 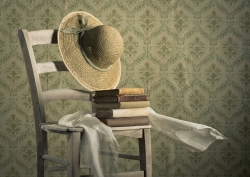 By the end of the class I ended up with a handful of short, nonfiction stories—some that I might rewrite and others that I might let sit and ferment for a while. I wrote a story about my father’s work as a missile researcher, accompanied by an article I found about a time he won an award for his work. I wrote about my kids, with a photo of them in San Francisco the summer before. I wrote about visiting my father’s house via Google Street View. I wrote about a man in a hole who I saw working on an underground pipe on my walk to work one morning. I wrote about endings, via a photo of a yellow and red leaf on the ground.

We’re in an era of short bits and bytes of information. Of photos posted quickly. Of stories flashing by at the speed of light. This class helped me to capture some of these stories and fit them into a form that made sense, in part because it’s a form that grows organically out of my life on and off social media. This is the age in which we live: an age that craves slices of stories, told quickly. Some of the slices I actually ended up posting on Facebook, using the hashtag #StorySlice. And I found that people engaged these photos more than my average, run-of-the mill ones.

We don’t have a lot of time to read and write, and yet we spend a fair bit of our time on social media. These two facts combined are what make Laurie’s Story Slices concept such a genius idea. Instead of railing against social media, we need to learn to fit our human stories of birth and death, gain and loss, growth and compassion, into the formats we have available to us, the formats our brains have grown to like.

We’re storytelling creatures. We need to tell stories, and hear them, in order to survive and make sense of our world, of others, of ourselves. What we need to learn to do is tell stories that matter in the genres of our time. And as genres and platforms change, we’ll be continually changing the way we tell stories. It doesn’t matter so much what formats we use, however, so long as we know how to use them to tell the stories we want to tell, and how to reach the people we want to reach.

We’re storytelling creatures. We need to tell stories, and hear them, in order to survive and make sense of our world, of others, of ourselves.

One of Laurie’s mottos for the class is “See. Experience. Capture. Move on.” The idea is to capture a single moment, to write about it in the moment, and then to move forward. This is good advice for any form of writing or creative act. It’s about not getting hung up on form, about being in the moment, about learning to tell the story that a moment contains.

I’ve been continuing to write slices of stories since the class ended, and I hope I do far into the future. And more than that, I take more notice now when I snap a photo. I aim for small truths, the unseen in all my posts and photos and thoughts. And perhaps that’s the course’s greatest lesson of all.

For more about Laurie Wagner and her online and in-person courses, visit her website at www.27powers.org.

Vivian Wagner is an associate professor of English at Muskingum University in New Concord, Ohio. Her work has appeared in McSweeney’s, Silk Road Review, Gris-Gris, The Pinch, The Kenyon Review, and other journals. She the author of Fiddle: One Woman, Four Strings, and 8,000 Miles of Music.