Standing at an Angle to my Age, by P.W. Bridgman

When I was twelve years old, I insisted on entering the “Maze of Mirrors” during a local carnival. I walked into the same tempered glass walls through which I could see myself and past the warped-mirror versions of me, repeating over and again. As I looked through the windows toward the midway, I could see my mother pointing her finger toward the way she thought I should go, like a marble during a game of Chinese checkers. A small crowd gathered, and it became necessary for the carnie to come to my aid. My father was furious (he remains an angry man), my mother was grim (she remains devoted to an angry man), and a few folks got a good laugh at a girl with possible cognitive impairment.

In Standing at an Angle to My Age, P.W. Bridgman illustrates the perils and surprises of perspective altered by experience. These perils are not in any way limited by maturity. Age can certainly vary the angle of incidence, but the reflections (think physics) never cease, not unlike the walls of mirrors in my own past.

Mirrors framed the whole of my particular carnival story. I could not have been in any other place for the reflective theme to occur, and the emotional part of the place I’d been stuck put actual physical angles to my age. At twelve, I should have been able to find my way out of a rodent trail, right? Was I still a brilliant child, as evident before? Possibly not.

P.W. Bridgman’s book is a collection of short stories and flash fiction that illustrates the importance of “standing” wherever one finds oneself. This stance, at once universal and timeless, is a commonality of the human condition. It is an experience immune to time, which grinds as we wait, sometimes pointlessly—but sometimes not, and discludes any deity on its way to modify our coordinates.

The first story in the collection is “Ceann Dubh Dilis.” The title is a Gaelic musical reference, a song about a dark head and gentle hands. This tale introduces us to an elderly man with failing health and memory who shouts the names of the streets of Belfast and curses the conqueror who split Ireland. Then, there is a mild and believable miracle. The reader is left with more than one set of gentle hands and dark heads. An additional musical reference in the story makes for a very worthwhile annex, should the reader be inclined.

Bridgman follows his prelude with “The Meaning of Life According to Fred W. Kane.” Within, an almost-visionary near-Buddha grocery clerk maintains a post-horror enlightenment that is perplexing to all. The teen who works part time with him is confused by the spiritual checkerboard of the late sixties and lives a side-line life because of it. Deep communication is the most difficult thing to achieve, he discovers from Fred, as the two share words and skewed worlds. The name of “Kane” is interesting to ponder for title-sleuths. (I’ve always loved Citizen Kane’s gun, and Bridgman aims well here and elsewhere.).

Of some of the shorter pieces, “Trading Places” is exacting: Precise and quick to address how the inverse of social place depends on a physical state. I could give away “Ad Te Clamamus, Exsules, Fillii Heava,” but the reader should have the opportunity to react to the ending and reflect on the hints. The introduction of “L’ves L’ved: Christian Hywel Aberthol Padwell” was so hilarious I had to read it aloud to another person, who laughed out loud. “Padwell” is delightfully snarky toward lives of white privilege, and clever enough to avoid offense. “The Mars Hotel” was produced as a literary/dance/musical collaboration in 2015, and I would love to have seen it. (I looked for it on YouTube but was unsuccessful.) “Mars” reminds me of Updike’s “Archangel” with a similarly powerful circular structure and content.

A disturbing “This Last Outing” contains a two-word sentence that tells an entire story. It is not to be missed if you have any inclinations toward social justice. Lastly, “Carrying On” is a story that better captures the theme of the book’s title than some others. It is heavy-set with mathematical-sounding words that reinforce the geometry of work, distance, time, and communication, and how they play on the plane of existence and perspective.

In the tale “The Secret,” the power of naming gives the reader clues about what swims beneath the surface, but they not essential to those who’d rather focus on plot. However, for the immersive reader who enjoys the excavation of layers of meaning, this tale gives ample fodder for well-worthwhile research. Being such a reader, I found the merging of character sources magical. Without spoiling the story, the nickname of “Little Miss Muffet” says a lot about her relationship with her father. I think that when the central character, Astrid, learns of “the secret,” she reacts to a lesser emotional degree than I expected. However, the deliberate noise of time and the continuation of faith is useful to the story. The setting is very limited (as compared to its action and history) and Bridgman serves us the plot in a way a wider window couldn’t provide.

I had the fun of churning up allusions, laughing, reading of characters both funny and not, and witnessing the many ways one can stand in a strange place while fitting in or standing out.

There are a very small number of weaker stories, for example, “Some Unlikable Canadians: A Narrative Fragment,” which felt humorous yet uncertain. The opening made me think of Diane Keaton’s Russian-novel-spoof soliloquy in Woody Allen’s “Love and Death.” But there is no need to avoid the entire book due to any of its very few shortcomings. A slim 161 pages, it contains nineteen tales and is a tribute to Bridgman’s talent to carry out so much in such a small space. The arc of flash fiction is very difficult to satisfyingly perform, and though space prevents me from celebrating his many victories in this form, they are also skillfully wraught.

I was curious to see how such a skilled writer would wrap up the variety of styles used in the book, even though most compositions are quite short. I was rewarded with the last piece of the volume, “Cake, Bang and Elm” (the surnames of the subjects who link a number of lost causes in this final story). Bridgman presents to the reader a gallery of impressionistic peeping-Tom-like events famous to the residents of St. Jude’s Lane. The neighbors worship gossip and peck out useless sarcasm like, “If he’s a cake, I’m a lolly,” “That’s a little unkind,” and “He cradled it [a for sale sign] in his arms like a baby.” Singular input, but many views, each like too much pepper, but rewarding and humorous. These observations left this reader questioning her own speech and action: class structures are made apparent by behavior and the narrator, knowingly, lives at a higher incline that most—being of a particular age as well as an astute eavesdropper. Bridgman employs an interrelated string of flash-like compositions in the tale to an excellent close.

Important notes to the reader: Be aware that Bridgman’s lengthy acknowledgement is not to be overlooked. The author blends context and content from numerous works, and the reader’s full appreciation depends on an awareness of some of them. This is a serious work. Though true of all writing, Bridgman’s first collection is enjoyable on as a light repast, but very meaty for those who take the time to chew thoroughly. Length of form does not lessen the quantity and quality of care a writer expresses. Within, titles and colloquial phrases contain meanings that may be necessary to infer (or research), depending on the reader’s skill with languages.

Standing at an Angle to My Age was a vigorous read for me. I had the fun of churning up allusions, laughing, reading of characters both funny and not, and witnessing the many ways one can stand in a strange place while fitting in or standing out. I hope Bridgman continues to produce this unique kind of work. A substantial number of these tales are award-winning and rightfully so.

The book has been published in Canada, England, Ireland, and Scotland, and now Bridgman’s book has found my American desk; the writer is on my short list. 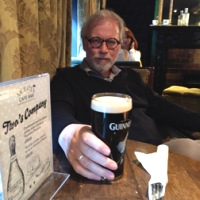 P.W. Bridgman lives in Vancouver, British Columbia. His work has appeared or is forthcoming in The Moth Magazine, The Glasgow Review of Books, Grain Magazine, The Antigosh Review, Easy Street, and elsewhere, and has been selected for anthologies in the UK and Canada. His first collection of short fiction, Standing at an Angle to My Age, was published in 2013 by Libros Libertad.