I met Brendan Constantine at a magazine party in Southern California.

When I say this, dear reader, and visions are conjured of champagne and perfume and centerpieces, it was indeed as glamorous as you imagined imagine. Swathed in dark lipstick and writer black, I tottered up the stairs to join the glamorous literati clan to which I was supposed to belong. Trouble was, I didn’t know a soul aside from an editor at the hosting press and she was nowhere to be found.

I busied myself with the book table and a rack of broadsides for sale, cursing myself for choosing platform shoes—though they made me significantly taller, people were pointing. (They were so ten years ago. Maybe fifteen. Shouldn’t they be in style again?)

I bought a broadside for my best friend/hostess and one for myself. Mine is a poem—now framed in my office—called “My Favorite Story Is This One,” about the bears left in Goldilocks’ wake. I was writing fairy tales, too. I hear you, Poet Brendan, I said to the broadside, marveling at the once-again revelation that we, as writers, are rarely alone.

Turning a corner I came face to face with a strikingly be-suited man. He said something lovely to me. I said something (hopefully) lovely back. He asked if we knew each other. This is not uncommon; I have one of those faces everyone thinks they know. I’d been traveling a lot, reading some. Wonderful, he said of my presence at the party. I felt like Cinderella at the ball. Yes, I’m sure we’ve met, I said—eighty percent sure I was lying. I wanted it badly to be true. We patted hands, wished well, and went our separate ways.

A half an hour later, half a chicken breast and a tortured conversation about my lack of an MFA later, the be-suited man took the microphone at the event. He said his name. His name was at the bottom of my broadside. Kismet. I’d already shaken hands with the only person in the room whose work I would carry home with me. And I would carry all I could get my hands on: Birthday Girl with Possum, Letters to Guns, and Calamity Joe.

I spent the remainder of the trip reading Calamity Joe (Red Hen Press, 2012). My best friend asked when I might put the book down so we could go to dinner, lunch, ice cream, the airport. Later, I said. Can I borrow it? She asked. Yes, of course, I said, but took it with me to re-read on the plane, having another catharsis over peanuts and flat ginger ale.

When I asked Brendan to be our very first Poet-in-Residence, I did so because I want more readers to discover his work—its immediate, multifaceted vibrancy. Here is a man who lives his own poetry—teaching, learning, traveling, speaking, volunteering—and I couldn’t be prouder to welcome him to Easy Street.

We begin with a poem from Brendan’s forthcoming collection, Dementia, My Darling (Spring 2016). In the coming weeks, we’ll discuss spoken word poetry, ask Brendan our standard Take Five questions, and discuss the complexity of why poetry matters.

Regardless of when we met, my life is better for knowing Brendan and his poetry. Readers, I wish the same for you. —C.G.

The War On Drugs
for Ilene Waterstone

The war called at midnight, called again
at two, third time it left a message. Made
no sense; something about wagons, a palm
tree weeping, (I played it over), weeping.
Said something else about money, a ride
to the airport. The airport was closed,
was falling, the airport was crawling
with cops. Come get me, it asked,
Can you come get me? But it never said
where. It called at sunrise, then again
at noon. Left a message, half rage, half
song—You’re all a bunch of cowards.
You don’t care if I die (eye, eye). To hell
with all y’all.

It must’ve called someone else after that,
someone who answered; a month passed.
I heard it went north. I heard Mexico.
A friend (of a friend) saw it raging in Rome.
Now it’s here, in this room, with the shades
drawn and the lamps on. It won’t show me
its eyes, its red, red eyes, rubbed out
like the price of a gift. It’s wearing
a hospital gown over jeans, a house dress,
over nothing, wearing a helmet, a rifle.
It’s barefoot, sandaled, got huge black boots
with no laces, and it’s sorry.

It’s so sorry about things: the disappearing,
the curses and songs. No really, it wants
to surrender. Can it stay? Some of it?
Can some of it stay the night? I should
keep away from the windows, it says,
I should kill the lights. If I say no,
it will go off, it will cry or break things,
accuse me of loving it all wrong. I love it
all wrong, as a cup loves coins, a bed loves
fire, a tree loves whoever comes to eat
its last heart. When the phone rings again,
the war watches me hesitate, then grabs
the receiver. It doesn’t know its own voice
on the other end. Christ, it’s so loaded,
it can’t tell it’s lying. OK, it says, I’ll ask,
but seriously, just for one night.

And if I let it stay, it won’t stay. That is,
it’ll find something of mine to steal,
then find a reason to leave, before
more of it comes—in helicopters,
rubber rafts, in busses, paper bags—
comes to take the city, mother by mother,
and pawn it. What will it get for us. 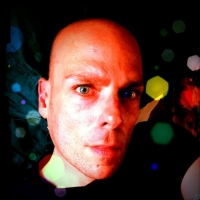 Brendan Constantine’s work has appeared in FIELD, Ploughshares, Zyzzyva, Ninth Letter, Poetry Daily, ArtLife, and Hotel Amerika among other journals. His first book, Letters To Guns (2009 Red Hen Press), is now taught extensively in schools across the nation. His most recent collections are Birthday Girl With Possum (2011 Write Bloody Publishing) and Calamity Joe (2012 Red Hen Press). He has received grants and commissions from the Getty Museum, James Irvine Foundation, and the National Endowment for the Arts. A popular performer, Brendan has presented his work to audiences throughout the U.S. and Europe, also appearing on NPR’s “All Things Considered,” KPFK’s “Inspiration House,” numerous podcasts, and YouTube. In October of 2014 Brendan headlined at the Dodge Poetry Festival with many of the nation’s most celebrated authors. He currently teaches poetry at the Windward School in Los Angeles, California. In addition, he regularly conducts workshops for hospitals, foster homes, & with the Alzheimer’s Poetry Project. Visit brendanconstantine.com