On the Edge of Creation 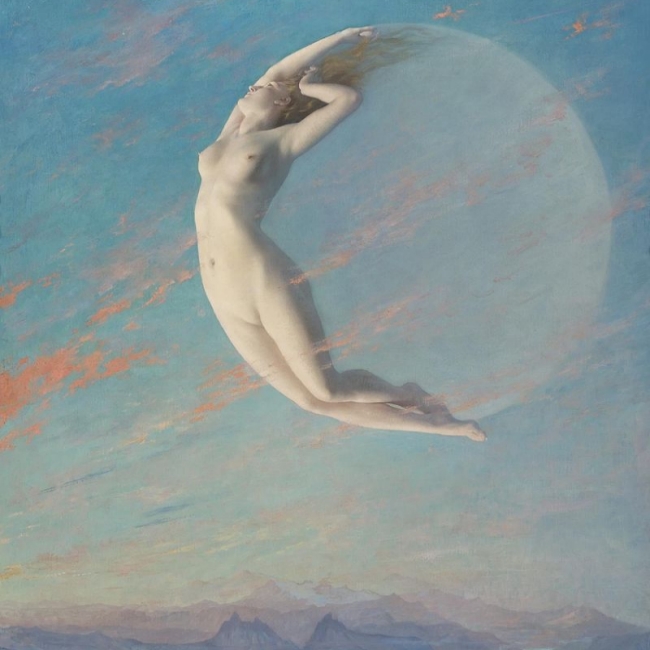 For as long as the boy had lived tree men had chased him. Always with nets, clubs and rocks. Tree men were powerful because they witnessed where sky meets land, they could see the future reflected over the horizon from their treetops. But on the ground, sight closed in by wilderness, they were blind as moles. They’d sniff around, senses dulled, and never know the boy was within but an arm’s reach. This never discouraged them to the point of calling off the hunt, for the tree men knew their numbers were strong and growing, while the boy’s stayed the same. One day, no matter how wily the boy, the tree men were bound to capture him.

Alone, in his hollowed out tree shelter, fire burning low and nearly smokeless in order to not be spotted by tree sentries, the boy sniffed at the air, inhaled its softness and knew all the world was cupped in a woman’s hands. The boy knew when her long, slender fingers closed, twilight turned to night. It enveloped and intoxicated. He felt her heartbeat in the rhythm of nocturnal animals scurrying, felt her soft breath in the soundless beat of snowy owl wings on the prowl, heard her moan stifled against his neck when electrical storms burned on the horizon. After the growls of thunder faded in the distance, the boy shivered in the dark, alone, spare the shadow of his tame lynx that walked over to the boy’s now still form, purring, settling in as the fire dwindled to memory.

The boy and lynx spent their night dreaming. Dreams of blood and murder and velocity and thunder and hunger and men shouting and panoramic views from impossible perspectives, even though the boy and lynx had neither lived lives as hawks circling thousands of feet in the sky. So how did they know what it looked like with such detail?

The boy never knew, petting the lynx when he awoke. Same as he never knew how vivid images of a naked woman entered his dreams when he had only seen one woman in his life, and she was fully clothed, eyes large, full of fear and light, standing on a rock creekside, unable to scream but able to point. For a moment time slowed, the stare holding the two in place, transmitting a message that neither could decode but could understand as a rise in the pulse, as nerve endings tingling to life, as breath escaping as veils of mist in the morning light, before the tree men followed the woman’s shaking finger with their eyes, resuming the eternal chase of sun and moon, sky and land, tree men and boy.

The memory often drew the boy back to the same spot on the creek—the lynx scanning the pools for trout, while the boy tracked for any sign of the woman. When none surfaced, the boy sat on the embankment and began to scrawl her shape in the clay with a stick. The naked version from his dreams, not the clothed.

In the distance, the boy could hear new troop movements through the forest. The tree men had already descended from the safety of their treetops to resume the chase.

The boy didn’t care that day. He lingered over his drawing of the woman, thinking of that moment and expanding on it. In his thoughts the tree men fell away and only he and the woman existed. Her bark-fibered clothing burned from her skin, before her naked embrace consumed the boy. Together they burned, flames leaping from tree to tree, the whole world erupting into a ball of fire nestled in the palms of a woman, until the boy and the woman became tendrils of oily smoke rising from the scorched forest floor like sighs.

Only the low growl issued from the lynx could extinguish the boy’s revelry. The two shared a look that each understood, and the boy begrudgingly bounded across the creek with the lynx and hid in a lee of alders and ferns.

As the two watched the tree men emerge from the forest, these ill-adapted pests that had plagued the boy’s existence since memory began, the smoldering coals of his former thoughts reignited, spreading like wildfire through the branches of his brain, taking the symbolic and the real and melding it, until the strange vision took hold of the boy and haunted him all that day.

As the great woman’s fingers closed around the world and twilight slipped into night, the boy returned creekside in the oily sheen of a full moon with the lynx. There, in the clay embankment, his drawing of the naked woman had been obscured by tree men footprints. The boy took this as another example of how tree men had no regard for anything he held sacred.

Kneeling over his ruined picture, the boy began to dig into the clay with his fingers angrily, as the lynx watched on, creating long trenches that nearly reached the rocks at the water’s edge. Not until he stood back in the moonlight, dirty and breathing hard, could he see his drawing of the naked woman resurrected, but huge. On a scale, the boy imagined, as big as the great woman that held the entire world in her hands.

The flames of the boy’s daydreams reignited at the sight, at the round breasts, the mound of stomach, the wide hips, and the boy laid down between her great thighs. The moon rained down over the trees, filling the gulleys the boy’s hand had made, limning the great woman’s form with light, until the earth began to quake beneath the boy and rise. The boy leapt down next to the frightened lynx and watched the shadow of the great woman grow overhead, eclipsing the moon and treetops, only the spores of stars still visible as they swirled around her head.

The boy knelt before the great woman, humble, in awe, saying a small series of sacred words that only his tongue could make. In response the great woman’s clay fingers picked up the boy and lynx and placed them on her shoulders. The sight of the moonlit world below matched the impossible points of view from the boy and lynx’s dreams. This was living the life of a hawk, the life of a tree man, but more. Much more. This was living on the edge of creation, this was being a god.

The boy again knelt humbly before the ear of the great woman and whispered. Instantly, the boy and lynx felt the silky night air rush around them as the woman’s great strides crashed through the forest below.

When the great woman stopped, standing over a copse of treetops lit with strange vines of light, the boy realized how weak the tree men had been all along. That he had spent his entire life running from an enemy that believed themselves to be gods but were only men standing on stilts.

After the great woman lowered the boy to a tree platform, he found the tree woman from the creek. There, she slept in her bed, alone. When the boy approached, the woman instinctively awoke. Again, the woman’s eyes enlarged, full of fear and light, yet it was as if her groggy mind accessed the memory of the moment the two had shared creekside. Instead of screaming for help, she remained quiet. When the boy gently reached for her hand and she accepted his touch, the unspoken language of their quickened pulses corresponded with one another, and they rose into the night pinched between the clay fingertips of the great woman.

The boy, the woman and the lynx stood on the shoulder of the great woman, looking down on the village of the sleeping tree men. The woman seemed unphased by it all—the great woman, the boy, the lynx—as if she were destined always to live this moment.

When the boy knelt again by the great woman’s ear and whispered, the woman seemed resigned to what would come next: the great woman smashing the tree village beneath her feet, the screams of the dying rising in the air like tiny songs, the blood of the world she used to know and love anointing the ground below. As the woman looked away to the future unfolding over the horizon, she knew that every new life begins with a woman’s sacrifice.