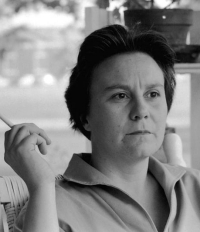 • It’s true. The sequel to To Kill a Mockingbird will appear in July of this year. Harper Lee actually wrote the novel, titled Go Set a Watchman, in the 1950s, before Mockingbird, and had thought the manuscript was lost.

• The Science Fiction & Fantasy Writers of America will soon accept self-published works for membership consideration. However, such works must still meet minimum earnings requirements—which in most cases will constitute a high hurdle.

• Wanted: Doris Lessing biographer. “It will take an enormous amount of research work, and of time, to go to America, to UEA, to South Africa. It’s an enormous undertaking.”

• English majors are on the decline. Employment prospects are partly to blame, but so are curriculum changes.

• Why authors walk away from publishers. Once a current becomes strong enough, it cannot be reversed.

PICK A MANUSCRIPT
AND PRICE
GET AN EDIT

Interested in being a correspondent for Town Crier? Write to editors at easystreetmag dot com.

Stephen Parrish is a contributing editor at Easy Street.