Modern Resuscitation, Or: Where You Keep Your Heart 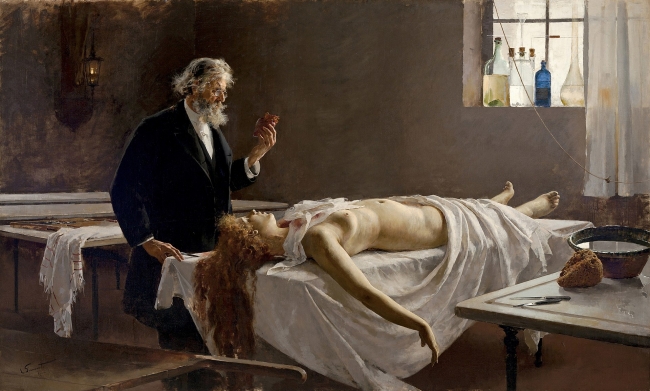 I’m pumping the way I’ve been doing for the past minute. I remember some exercise tip, something about being able to talk but not sing when it came to achieving your optimal heart rate, and I forego my mechanical counting for a mumbled cover of the Bee Gees’ “Staying Alive” like how I’ve seen advertised on stupid morning news programs. My father likes to tell people that his son became the hospital’s youngest CPR instructor at the age of fourteen, and occasionally earns some extra cash re-certifying the network’s healthcare providers in basic life support. I’m twenty-one now, and I can feel my fat bobbing around under my sweater as I perform chest compressions. I become aware of the number of women in the room.

My rhythm hiccups and, still counting in my head, I yammer on to the handful of dental assistants about the click they’ve been hearing. The American Heart Association tells me that the click is a sign of effective compression depth. That’s really the ribcage, I want to say. Those might be ribs cracking. See, the heart is behind the ribs, and proper cardiopulmonary resuscitation essentially involves punching the white picket fence that protects it. In order to help, you have to hurt a little. Break a few things. Fortunately, your victim will most likely be so grateful for your service that they won’t mind taking off work for the next few weeks to heal, and should they decide to sue, Pennsylvania’s Good Samaritan law should cover you. Each of their pained inhalations reminds them of that blank, fleeting, forever time when their breath reeked of a stranger’s CO2, when interlaced hands lured their heart into functioning, and, strangely, how wide awake they feel now.

I have to remember to drown all the plastic later. I’ll mix warm water and dish soap and bleach and sometimes more bleach inside a tall white laundry bucket. I’ll haul it to the kitchen and spend the next ten minutes playing scientist: unhooking chests at the shoulder and side, disposing of lungs, dismantling jaws, and peeling off the faces of five mannequins—four adults and a baby, quadruple amputees, all named Little Anne by the manufacturer. By the time I’m done, the Annes look like something exploded inside their hearts and minds, shells of themselves, scooped out and busted open like the end of a lobster feast. I line up the Annes in the basement next to the rest of our CPR equipment and run up the stairs a little too quickly.

When I shut the basement door behind me, I look down at my left arm. I’m cradling the scooped-out baby Anne, and her face is with the others in the bleach bucket, eyes squeezed shut, her mouth open to a silent ah.

Sam says that every time I text him, his heart flutters. That’s called ventricular fibrillation. He might need CPR. He says it’s called being sweet, you ass.

The Egyptians claimed that the heart was the intellectual core of the body. After being broken apart and removed through the nose with a sharp object during mummification, the brain was discarded with the day’s trash. The heart was safe from extraction—it was too valuable to be removed by human hands. In the afterlife, the heart and its owner’s earthly actions would be weighed against the feather of Ma’at, and only then could the soul pass through to paradise. Failure to pass this test resulted in the heart being gobbled up by a female demon, a second death of sorts. A heavy heart has no place in heaven.

What they don’t tell you is that the mouth of every mummy has been opened, whether by fingers or knives, its spirit living only as long as it is fed.

In the middle of his sentence, Sam reaches out to adjust my necktie. He plants his knuckles in the middle of my chest as he levels the black Windsor knot with his thumbs and subsequently corrects the trail of silk leading from it, wordlessly sliding down to the southernmost point of my sternum, my xiphoid process. I’d learned from my first day of CPR training that pressing on this ossified lump can puncture a lung, yet I stand a little straighter and let him smooth out what he wants, trying not to think of what his hands could do to me if he knew all that I did.

The only defibrillator is in the nucleus of the shopping mall—I’ve checked. It’s a plain-looking gray box that would make it seem like an oversized answering machine if it weren’t for the red cross emblazoned on its cover. It could be showcased in glass with an emergencies-only hammer hanging by a string. It could be bright green plastic with a chart next to it on the wall. If it’s a pre-2000s model, its shock pads can’t be adjusted to suit an adolescent victim, and it might give three stacked shocks instead of a single large one. No matter; it could still save a life, though I can’t imagine a civilian being able to find this box quickly and bring it to me. The life expectancy of a cardiac arrest victim decreases exponentially with each passing minute.

I’m always thinking about the people who surround me slumping over and, next, how I’d help and how much help I’d actually be. Those food court nachos could have clogged that one crucial artery, or maybe they have an undiagnosed heart condition. That pregnant lady, that man on the bench, that distracted teenager, no one is safe from my imagination. This is how I keep myself sharp. In my mind; in my prepared, paranoid mind; everyone collapses.

This is what I know to be true: I am one month old, and the doctor hears something in my chest. He leans forward, adjusts his stethoscope, and scrolls through his mental Rolodex of heartbeats as infant me with large wet eyes stares up at him. I hear something, says the doctor, and not in the tone of voice that reaffirms the quantity of fingers and toes. Chests have heartbeats. Nothing new. I hear something. My mother’s face falls as she starts to reach out and touch me. In a month they’ll fly me to Bethesda to see a pediatric cardiologist; in the meantime they’ll say I have a murmur. A whisper. A mumble. Maybe my parents hold me tighter, hold me more often, to make sure that my heart is still beating. Here they’ve barely named me and already I’ve wasted no time in causing them stress. Jaundice had come upon me shortly after my birth; the result of my strange little body valuing sleep over sustenance. The yellowish tint in my skin has since faded, but my heart?—that sort of thing doesn’t fix itself, does it?

A second scan reveals nothing but an overly cautious pediatrician. I’m sent home.

I can hear your heart.

Sam raises an eyebrow. My heart’s here, he notes a bit hollowly, tapping the middle of his bare chest.

I know, I say, but I feel something else.

I dig my left ear further into his upper arm. I can hear beating. Lub-dubbing. I don’t see Sam roll his eyes as he lurches forward and peels his skin from mine, just like I won’t see his girlfriend’s photo as he checks his phone. Now across the room, still half-dressed, he asks if I want anything to drink. I want to ask where he keeps his heart.

The first time you hold a cow heart in science class, gray from formaldehyde, you’re reminded that there’s one of those inside you: a wrinkled, rubbery, complicated, struggling, efficient mess. You think about what it’d be like to crack open your own chest and switch out your perfect heart for this one; you wonder if it’d feel cold and clumsy like how you, as a child, might have taken your freshly-pulled baby teeth and reinserted them into their sockets. You peer into the organ’s various tubes—the entrances are lined with fronds, like the gills on the underside of a mushroom, and those are all you can taste even after you’ve given the heart back to your teacher and scrubbed your skin until the water ran cold. Your teeth, once you removed one living thing from another, somehow that’s when you first knew that you’d die one day, with your heart in someone else’s hands.

My father works in the hospital. He’s the guy who helps the doctor put you to sleep and bring you back. That’s how he explains it, verbatim, with emphasis on the bringing-you-back part. He gives you the gas. He keeps one eye on you and the other on your machine. As soon as your life starts to slip, a helium balloon rising up toward the tile ceiling, he grabs you by the string and yanks you back down to the operating table, trapping you back in your sliced-open body.

One day, he’ll run out of heartbeats. My soul-holding father will fall, and my mother’s screams will have jagged edges, and I’ll have to be the one to break my arms pounding his massive form back to life. But maybe I won’t even be there. I’ll be shaken awake at 3 a.m. I’ll be in the next room. I’ll be drunk. I’ll be abroad. I’ll be shelving bread at work. I’ll see the fourteen missed calls as I get out of class. And in all of these, even before any words are spoken, I’ll know that I missed my chance.

An earlier version of this story was first featured in [apt] under the title “Cordata.”

Elijah Tomaszewski received his bachelor’s in creative writing from Susquehanna University and his master’s from Rosemont College, where he edited nonfiction for Rathalla Review. His work has been featured in Snapdragon: A Journal of Art & Healing, Jet Fuel Review, [apt], RiverCraft, and Tacenda Press, and was presented at the 2017 Radical Writes Conference at Arkansas State University. He lives in Philadelphia.