I was at my local Cineplex last Saturday afternoon, waiting for my wife to pick me up. I don’t drive anymore (a habit everyone who can should try sometime) and, as I waited, I read from my recent book purchase, To Be An Author: The Letters of Charles W. Chesnutt. Reading outside on a cool summer day is one of life’s great pleasures.

A young child ran up next to me on the raised garden wall, and completely ignoring me (or my displeasure), made a lot of noise. Next, her little sister joined in the fun and proceeded to do the same. I looked up waiting for the parents to maybe rein their children in, but that never happened.

The young mother was on a cell phone, loudly conversing with someone very important, and could not be bothered to pay attention to her immediate surroundings. I commenced to put on my most tiresome glare to no effect. At the moment when I was about to make my presence known to the people who for some reason could not see me, the father arrived and pulled the children down and away from me. I was pleasantly surprised, but then non-plussed again, as not one of these fine people made any kind of acknowledgement of my presence.

The thing that caught my eye, though, the thing that made the whole scene incongruous to me, was the fact that we were all black. Like most black people, we are a minority population in almost every social American situation, even in my diverse small town of Garner, North Carolina. The unspoken rule is that at least a token acknowledgement is made whenever we encounter one another socially, strangers though we may be. That acknowledgement never happened. A lost cultural tradition, busy obliviously parenting, or the decline of civility in the technologically isolating world of today: I don’t know. It was, as I say, an incongruity.

I think for the first time, Hollywood has caught up with what it means to be a black American. We have come a long way from the Gone With The Wind monochromatic view, to a multi-faceted and more realistic view.

Oh, and the other thing that caught my eye: the young father proudly sported a Captain America t-shirt, in all of its red, white, and blue glory.

Marvel’s two movies, Captain America: Civil War and X-Men: Apocalypse are by any standard commercial blockbusters. Captain having been out for four weeks is set to make $400 million; X-Men, out for a week, has generated $100 million. Captain was sold out many times during its release when I tried to see it in my local White Oaks theater; X-Men (even with its graphic violence) still had a good crowd when I watched it that Saturday.

Both films also contain a sub-text about blackness—a sub-text that apparently will be widely seen. 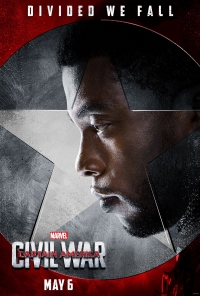 Captain has a much more hopeful, post-racial commentary about race. When the world’s most powerful superheroes are in the boardroom scene, two black men sit at the table. When the ‘villain’ is being chased, another black man declares menacingly “As a warrior, and as a king, do you think that he can hide from me?” and the audience I saw it with agrees that no he can not; in another scene the warrior/king’s black female bodyguard has a mini-confrontation with the superheroine Black Widow (played by Scarlett Johanssen) and the audience laughs because it knows that the Black Widow will lose. In another pivotal scene, I was struck by the fact that when Iron Man needs crucial information he goes to the one man that he knows has that information, a superhero (portrayed by a black actor), a man the audience has come to trust. Captain’s message is that blackness is equal and it is at times very powerful.

X-Men’s message, on the other hand, from beginning to end is wrapped up in the whole African-Amercan historical vernacular; the X-Men movies and comic books have always had a racial minority subtext, and Apocalypse continues the theme of majority/minority relations all the way until the end. This is the sixth (or if I think about the Wolverine movies, ninth) movie in the X-Men universe, and Americans are already familiar with the blackness subtext from the days when Halle Berry played one of the key heroines. 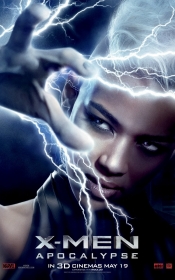 Before the movie even began, I watched the twenty minutes of commercials that set the stage for a racial conversation: the Asian-American hip-hop artist pushing a soft-drink, the movie preview for The State of Jones with a white Southerner defending the rights of black former slaves, and another movie preview with a soundtrack straight out of hip-hop, amidst video-game live action. Once X-Men started, the color blue is introduced and is made obvious throughout. Substitute the word “black” and you have the American civil rights movement of the early eighties. Characters must consider whether or not to hide their “blueness” as a matter of course. Another “blue” character prays for a full minute on-screen to a higher power, who might have heard the same prayer in an antebellum southern black church. And the final scene is almost a call to action for a kind of empowerment for the “blue” minority.

I think for the first time, Hollywood has caught up with what it means to be a black American. We have come a long way from the Gone With The Wind monochromatic view, to a multi-faceted and more realistic view. I am proud to be both a nerd and black.

Now if I can only be proud of how parents raise their kids, to be cognizant of their surroundings when they leave the movie theater. Avoid the old guy reading a book and waiting for his ride.

Michael Hassler has written a million words of journaling (from 1993-2007), the recently published essay chapbook My Race Problem, and a forthcoming novella. His piece, “I find myself at 7:00,” won second prize in the nonfiction category of the 2015 Carteret Writers contest, third prize in the non-fiction category of the 2015 Porter Fleming Literary Competition, and appeared first in the Spring 2015 issue of Eclectica Magazine. He is currently finishing a Bachelor of Science degree in Integrative Studies from Kennesaw State University, with concentrations in Computer Science/Information Systems, Economics and World Literature.