Struck by Lightning in a Garden of Fugitives: Author Ashley Mace Havird

Ashley Havird’s debut novel, Lightningstruck, and her book of poems, The Garden of the Fugitives, are the subjects of two forthcoming reviews at Easy Street. Ashley has agreed to speak with us about both works and the connections between them.

ES: Thank you, first of all, for being with us and sharing your ideas about your work and your craft. Ashley, you are masterful in both poetry and prose. Are you a poet who works as a novelist sometimes, or are you a novelist who focuses on poetry from time to time?

AMH: First of all, thank you for the compliment, but I feel far less a “master” than an eternal student. I began writing in the 1970’s as a short story author and then moved on to poetry, which has been a major focus for me for at least twenty-five years. I approach everything I write as a poem of sorts. I revise and hone with a vengeance. I guess this makes me a poet who also writes novels. I am equally happy, though, to be thought of as each!

ES: I think of the craft of poetry as being very different than the craft of prose. Since you find them closely related, would you say a bit more about that?

AMH: It’s easier to keep the “whole” [poem] in your head all at one time. A novel, or even a story, keeps escaping, keeps sending runners out here and there. Or that’s what happens to me. For me a poem is similar to a weighted scene that perhaps suggests a story. There is a pressure to the language. Prose is more like a mural and moves from block to city block.  All this [movement] is in addition to the word, the sentence, the paragraph as art form.

ES: The Garden of the Fugitives contains a poem you wrote titled “The Horse That Was Struck by Lightning.” The immediate outcome in the poem is very different from the one in your novel Lightningstruck. How are the two related?

AMH: Troy [from Lightningstruck] was not struck by lightning at all in my earliest drafts, which began around the year 2000. He was just an ornery old horse modeled on one I owned for a short time as a girl. In 2002 I wrote the poem “The Horse That Was Struck…,” which was based on a real event—a lightning strike—that killed a friend’s horse. Bay, the dead horse of that poem, subsequently found new life in Troy, who survives his initial lighting strike and as a character grows far richer. I steal from my own work whenever the need arises. Why not?

ES: The images in your poetry are surprising and beautiful, even when they are not what we generally think of as beautiful. For instance, fire ants, flies and even a worm.

AMH: Thank you for that comment on my imagery. I work hard on those details. I think I focus on insects because of my upbringing on my family’s tobacco farm. My earliest memories are of being in the swamp, the fields, the woods, usually with my grandfather. Children do tend to look at small gory things, to examine ants eating dragonflies, that sort of thing. The whole concept of the living bone, the death/life two sides of a coin, the life in the death, the death in the life—not sure how best to put it—fascinates me. How lonely we are as a species, how alone in our knowledge.

ES: Let’s focus specifically on the novel for a bit. Two well-respected southern writers’ works came to mind as I read your book. Specifically, Flannery O’Connor’s “Greenleaf” and Carson McCullers’s The Member of the Wedding. In O’Connor’s story, a bull behaves like a stalker (as does Etta’s horse Troy), and in McCullers’s book a young girl is confused about her identity within her family. Will you tell us something about the themes of confusion, reality, and the nature of finding one’s way—about the “They are the we of me,” as Frankie says in The Member of the Wedding?

AMH: I probably read The Member of the Wedding five times while I was working on my novel. It was an invaluable reference. In Lightningstruck, the child Etta sees herself at one with her family and with Cleo and with the men at the store and with the other farm workers. She is the center of this “we” of her immediate community. There is no larger world … Then, Troy. Then, eleven. And awareness or consciousness, the gift that cannot be ungiven. Now the split with safety and with those who made her feel safe. Along with her awareness of social violence and the cruelty of racism, she divorces herself from [everyone]. Her new “we” includes Miss Cass—a transformative relationship not only because she articulates Etta’s budding feelings and beliefs, but because Etta sees that Miss Cass is not perfect. By the last chapter, Etta’s “we” is herself alone, but with her personal past and all of history beneath her, and the future above her. In other words, she is the me of we.

The “Greenleaf” bull is an agent of O’Connor’s “saving rape,” a motif that is common in her work. At the end of the story, the goring inspires a moment of revelation for Mrs. May. The bull becomes an agent of God’s plan who shocks Mrs. May into a confession of humility. (Or something like that!) The bull carries heavy and fairly specific religious symbolism.

Troy is a more complicated antagonist. His stalking of Etta is more ambiguous. Troy is Etta’s “Trojan Horse.” She has invited him into her life thinking he, the horse, will solve her problems, make her popular, give her more freedom, etc. His presence, to Etta’s dismay, not only brings existing problems into focus but to her seems to multiply—amplify—the troubles in her life. Finally Troy represents essentially Life and Truth. Etta is coming of age, and nothing can “fix” that. She is newly aware of and disturbed by the Civil Rights Movement at the same time as she feels isolated/marginalized by her family. There is no return to innocence or the sense of security she felt only months before … So, to meander back to your point about stalking—yes, Troy stalks Etta constantly, sometimes physically and sometimes in her mind. But now that he has entered her life, he stays there. With all of his mystery, his gruesome injuries, his “powers,” his orneriness. There is no perfect “Black Beauty” or “Friend Flicka” for Etta, just as there was no romantic “Old South,” as depicted in GWTW. Troy is complex, and her feelings towards him reflect the complex feelings she has now for others in her life. Troy will never make things easy for her. Life does not make things easy. Troy prepares Etta, toughens her, for her future.

ES: The setting in Lightningstruck is a microcosm, but The Garden of The Fugitives is filled with diverse settings. Both, however, engage the reader with themes of place and our roles and influences. Although we no longer reside in Eden, nature and the environment—although not always beautiful—remain striking and meaningful. I found “Alice Gone Under” to be a very imaginative slant on an old bit of fiction. Tell us how you developed such unusual imagery.

AMH: I think I was experimenting with a bit of surrealism. “Acid Rain” is another of this sort … I was dealing with personal issues that were intense and confusing. I remember … reading about all the layers of the ocean and the creatures that inhabit them. I do remember the poem went through many transformations. For a long time “Alice” returned to the ocean’s surface, made anew. [At the end of the poem] “giant clams suppurate.” That last line gives me so much subversive pleasure!

The whole concept of the living bone, the death/life two sides of a coin, the life in the death, the death in the life—not sure how best to put it—fascinates me. How lonely we are as a species, how alone in our knowledge.

ES: Though you’ve spent a lot of time researching ancient ruins, your poems return to the shoreline again and again. How has the water influenced your work?

AMH: My best friend was kind enough … to let me come and stay [in her home in the Caymans] for a week, which is where I wrote the first draft of Lightningstruck. I have been able to return every year since then. For my 50th birthday, in 2003, I requested diving lessons. I do have a new poem about night diving … and my new novel-in-progress whose central character is a “Swimmer,” a young woman who has been bioengineered to scavenge the oceans for raw materials … The Sea is the last frontier, so to speak.

ES: There are many poems we did not have time to discuss. “Alice Gone Under,” “Wisteria,” and “Lunar Eclipse” are three of my favorites. Which ones are you most proud of?

AMH: I’m also partial to “Lunar Eclipse.” Perhaps also “At Stonewall.” “Resurrection: Ivorybill” and “Daphne” (which I’m now seeing as a “transformation” poem, as a predecessor to “Alice”). And the Last poem, “The Garden of the Fugitives.”

ES: What authors influence you? Do you have any “tricks” to share with writers? How do you keep track of your ideas? Do you have a set writing schedule? I see you squatting in the ruins of Pompeii with a camera and a notebook, or watching your ink run while wearing a damp scuba suit.

AMH: I am a broad reader of poetry. Among the many who have influenced me … are Wordsworth, Thomas Hardy, Theodore Roethke, Randall Jarrell, early Mary Oliver and James Dickey (who was my teacher).

I wish I did have a trick or two to share. The only things that work for me are keeping to a schedule … reading, reading, reading, revising heavily, walking the dog to refresh my mind. Oh, and keeping an editor in-house. (My husband, David Havird, also a poet, is a fine critic.)

I am disorganized when it comes to keeping track of ideas … sketched at the bottom of grocery lists, the back of receipts, sometimes a notebook that goes into something else … they’re a mess. Once I start really writing something, though, I have assigned notebooks.

AMH: I would like to thank you for your interest in my work. You have paid me the highest compliment anyone can pay a writer. It’s a real honor to have worked with you. 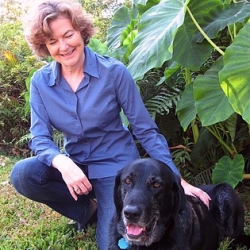