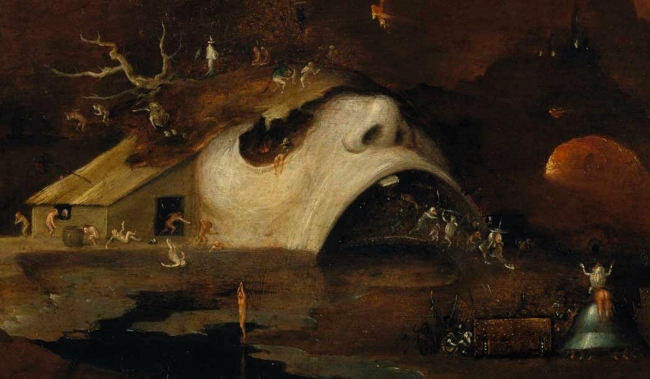 “Christ’s Descent into Hell” (detail), oil on panel, by a follower of Hieronymus Bosch, ca. 1560.

by Gustavo Bossert
Translated from the Spanish by Peter Robertson

When a row of trees started to swish against the car, and denser foliage knocked against the bumper and number plate, she sensed that she had lost her way. She had taken the wrong road, what with the darkness and the rain, and was driving down one of the paths that, crisscrossing the landscape, would surely lead to some country dwelling. Any doubt that she was heading towards a hinterland was dispelled by the presence of high-domed anthills, some towering above her.

“My soul for a bed,” she exclaimed, assuring herself that the best way to keep her spirits high was to engage in a stream of playful wishfulness. “Nothing less than my soul,” and it was as if her words had somehow conjured up the glow before her, not quite dissipated by the drizzle, and that could hardly have been emitted by her headlamps. “It must be the Hilton,” she quipped, but her self-directed banter belied her fear that it might all be a mirage.

At first diffuse, the brightness could now be defined as the pool of light cast by a lantern and that illuminated, and no doubt so that it could be visible from the road, a post that swayed in the wind. Reasoning with herself that, were it not for the deluge, the word HOTEL would be bodied forth through the dimness, she was flooded with relief. From her car seat, she could make out, albeit smeared by the rain, the hotel’s frontage and the indelible stain of the entrance.

Without any qualms about leaving her car on the road, she jumped straight out. So that her abrupt arrival would not startle anyone, she exclaimed, as she entered the hotel, that she was soaked right through. After hazarding a tentative “hello”, she enquired in a more insistent voice if anyone was around. But no one came to welcome her. Not only the murkiness, but also the dampness of the unpeopled room, which appeared to be a lobby, unsettled her.

She took down the lantern which, as she walked, cast light into each gloomy corner. The walls had a funereal aspect, as if they had been painted black, but this would be no more than an impression caused by the lantern’s guttering flame. She could see just enough to perceive that the room was unadorned with a single piece of furniture. Fumbling, she was unable to find a light switch.

She thought that she might well be alone in the hotel and, at least while the storm raged outside, clogging the roads with rank vegetation, considered it unlikely that any other wayfarer would carve out a route to descend on the building. On reflection, she reckoned it was fitting to stand on ceremony, as she did invariably when in the city, waiting for a member of staff to attend to her needs rather than taking it upon herself to go from room to room, looking for a bed.

She was perturbed by the pungency of damp earth that assailed her from all sides, and vexed by the ants that, climbing up from her shoes, made her slap her legs repeatedly, in vain attempts to dislodge them. There could be little doubt that not only the ants, but also the whiff of astringency, intruded from the open door abutting the forest. And so she decided to set her scruples to one side and, dispensing with any kind of assistance, look for a bedroom, if possible hermetically sealed, for the night.

She could not make heads or tails of the passageway that led towards the inmost recesses of the hotel: how it gyrated, and then plunged down, before plummeting ever deeper. The walls, far from being level, bulged out, as if they enclosed rooms that were also bulbous. It was all too baroque, she thought. And yet, for all her misgivings, she had the presence of mind to cling to an awareness that no matter how bloated the walls, guests would be sleeping soundly within them. As she walked, she was overcome by the all-too-familiar mustiness that she had first detected in the lobby.

She counted herself lucky that the lantern, its gleam now moribund, threw off a few last flickerings to reveal, on one side of the passageway, the aperture of an open door, behind which she would surely find, closing her eyes tight to avert disappointment, the longed-for empty bedroom.

As she moved forward, the lantern’s last glint fell on a heap of straw. With a growing sense of unease, she ran her hands through the stalks of threshed grain. Finding them clean and dry, she reckoned that they would serve as a mattress for one night.

In this outback, a far cry from urban comfort, it was no doubt the custom to sleep on straw. It was clear, in any case, that she had mistaken a shack for a hotel. Laughing at herself, she made light of her delusion. And what did it matter? She had been on the road for so many years, digging deep into reserves of self-reliance, to be undone by an improvised mattress in an abandoned abode. In any case, she needed to sleep, as she had to head to the city early the next morning. Fully clothed, she lay down on the straw.

Putting into order, in her mind, the interviews that she would give the following day, she could not help but count her luck—a room to shelter from the rain, a bed that was invitingly soft. Such thoughts made her almost oblivious to the dankness that reawakened long-standing pains at the base of her spine and the acrid exhalation of grass which, cut and heaped and deprived of air, had fermented. To console herself further, she dwelt on the sight and sound of familiar faces and voices. With the silence acting as a soporific, she fell fast asleep.

Minute black insects, in their thousands, climbed down her shoulders, covering her arms. Others, approaching crosswise, came to rest on her legs, while further legions encroached on her armpits and where her blouse lay open.

When, perching on spindly legs, the insects thrust into her flesh to seek the globules of fat they would store in their cells for winter, a searing pain awoke her. As she tried in vain to shriek, a viscous mass of black bodies tumbled into her mouth’s crevasse.

She could not bring herself to touch her arms and legs, as if engulfed by flames. Through the darkness, she rolled over the earth floor, looking for any way out.

The anthill’s inner wall hemmed her in.

Peter Robertson has translated from the Spanish and the French, including work by Jorge Luis Borges, Rubén Darío, Felisberto Hernández, Rosalía de Castro and Pierre de Ronsard. He lives in Argentina and Scotland.