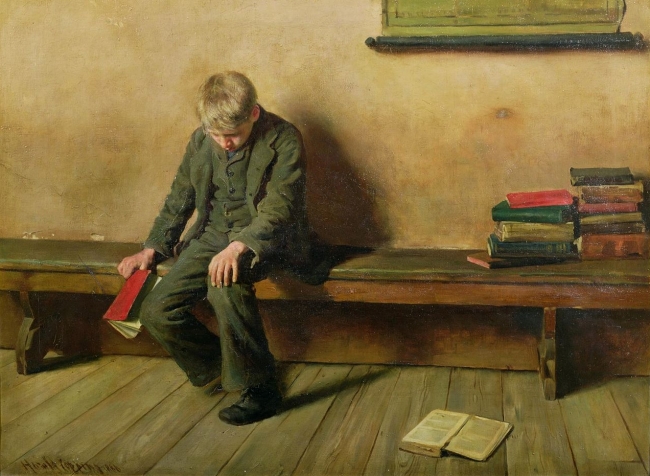 Mrs. Wilcox, the FACS teacher, with her flour crusted hands and sauce-stained apron, saved me. After Principal Masterson made the announcement, kids went wild. We had finished Lord of the Flies in the fall, but we quickly proved that we hadn’t learned anything. We of the Ritalin taking, screen affixed, acne-scarred didn’t need much provocation. Even CNN was reporting the end of the world. There were rules, and we were about to break them. Who could tell what might happen next? The world was ending, and we’d get our turn to help it along.

In the ensuing chaos, Jiffy mix boxes were ripped open, spatulas were wielded like knives, slapped in the palms of hands, until someone decided to throw a desk out the window. The heavy kind with the connected seat and the basket underneath for the textbooks we no longer used. There was no conch to stop us, so kids continued this anarchy until one desk remained. We hefted the desk, Ryan holding the front legs, me in the back, and waddled to the edge of the window, the old radiator standing in front of us like an imperial guard. The rest of the class was rooting us on, really pumping their fists, guys screaming, their voices finding a desperate falsetto, girls hooting, their bangles jangling, cross necklaces whipping in and out of their v-necks. Surely we had all the adrenaline that we needed, but I could barely carry a gallon of milk and Ryan’s wrists were the size of the end of corn cobs, made perfectly for the piano or a keyboard.

The window taunted us, framing a sky so blue and full of light, a vision of summer in late March. The crowd noise swelled, the rev of a high-octane motor. Who knew how long they’d shout, before their confidence was popped like a cheap latex balloon, deciding to do the job for us, deciding that maybe they could help us fly too.

I nodded at Ryan, watched his face pull into an animal rage, braces flashing from that perfect sun, his arms rising with the front of the desk, higher and higher until the leg of the desk caught and wedged into the scarred metal of the radiator.

Ryan scampered to the side, his hands pulling at his hair. The crowd surged forward, hands outstretched, and I knew that if I didn’t let that freaking thing fly, I’d soon be out the window too. From behind the desk, I tried to ram my end forward, hoping to flip the desk end over end, but the leg wouldn’t budge, so I was left balancing the whole weight in my cradled arms. I looked back for help, but Ryan had been overrun, stronger kids pushing him to the back of the room.

That’s when Mrs. Wilcox made her move, rushing me like a mother bear. I thought I was her target until she barreled past me and leveled the desk, the leg popping out, the desk flipping into the air. The crowd grew quiet, deciding. I could feel the static electricity of real violence. I thought of Piggy, the rock crushing his skull. I should have stepped in front of her, but if I couldn’t lift a desk…

An octopus of hands reached forward until they were patting the woman on the shoulder, tousling her hair, the noise crescendoing into the school fight song. Below sat a haphazard pile of desks strewn across the yard, a rocky cliff of our own making, that the custodians left for a week commemorating our uprising.

Tommy Dean is the author of a flash fiction chapbook Special Like the People on TV from Redbird Chapbooks. A graduate of the Queens University of Charlotte MFA program, he has been previously published in The New Flash Fiction Review, The MacGuffin, Split Lip Magazine, Spartan, Hawaii Pacific Review, and elsewhere. @TommyDeanWriter