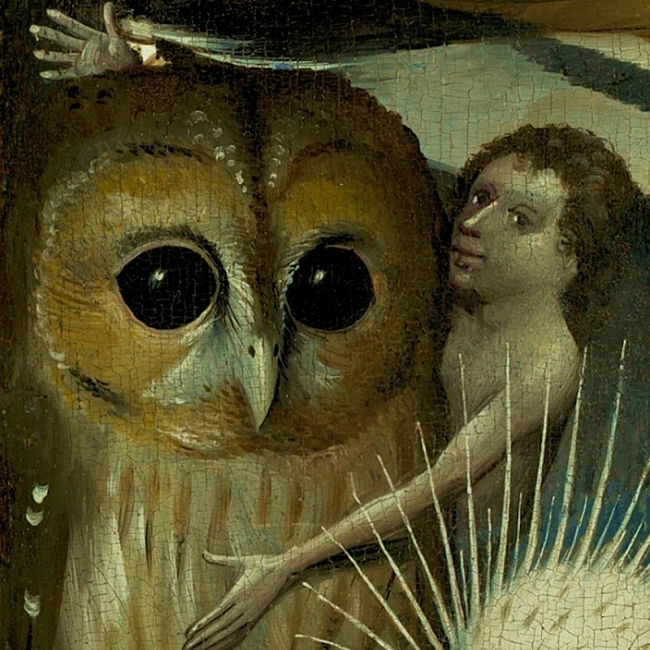 “The Garden of Earthly Delights” (detail), oil on panel, by Hieronymus Bosch, circa 1510.

By night the owl attacks the crow,
day the crow the sleeping owl, ego
and shadow, shadow and ego, forever,
as long as there are owls and crows.
Nothing is easy. The smallest, largest,
from first breath all fight to live. One
heavy Holstein in difficult labor stares
with unblinking eyes asking the farmer
why such pain. In distress, isolate, we
look for and sometimes find our gods
where we can. A tan chicken trapped
days behind an old freezer on the porch
when rescued couldn’t stand and lay
on its side. My father dipped its head
in a coffee can of cold water, again
and again, forcing it to breathe. Then
it followed at his heels always. People
at times refuse to eat, women wanting
to grow more slender, then addicted.
And others, our world something they
can’t swallow, maybe a Gnosticism
of the spirit telling the body this place
we woke in was never home. Russian
author of The Overcoat, Dead Souls,
Nikolai Gogol stopped, until his long
nose met his chin and through his
stomach he could feel his backbone.

Nels Hanson grew up on a small farm in the San Joaquin Valley of California and has worked as a farmer, teacher and contract writer/editor. His fiction received the San Francisco Foundation’s James D. Phelan Award and Pushcart nominations in 2010, 2012, 2014 and 2016. His poems received a 2014 Pushcart nomination, Sharkpack Review’s 2014 Prospero Prize, and 2015 and 2016 Best of the Net nominations.