Awkward in the Midwest

This week on Facebook, my daughter sent me a link to an Ebay listing for a dybbuk box. The description told the story of a woman who’d helped a friend clean out her parents’ home. Her mother had died earlier that same year, leaving behind a collection of tarot cards, crystals, and the dybbuk box. Some time after, the friend’s father had shot his daughter, then killed himself. Thankfully, she lived. As she recovered, the two friends worked together to clear out the house.

For those of you who’ve never watched SyFy’s Paranormal Witness, a dybbuk box supposedly contains a trapped malevolent spirit. Take a moment to Google it. It’s a fascinating/terrifying subject.

Of course, the obvious choice for rehoming a demon is Ebay. As for me, I’d prefer a shelter wherein citizens could peruse a selection of abandoned demons, but must pass a proper background check before acquiring one. Just imagine the craze hitting Instagram: “Me with my precious Azazel. He’s a rescue!” followed by the requisite smiley with hearts for eyes. Or, perhaps a new emoji would be created to represent the joy that comes with finally finding one’s evil soulmate. In fact, I can envision an entire online empire sprouting from this, including a website service hybridizing eHarmony and Petfinder, to help you find your “forever fiend.”

What is the price of such a gift, you ask? According to the aforementioned listing: $109.95. At least, that was the price at auction’s end. (Plus, the shipping was free within the continental U.S.) So for just over a hundred bucks, you too could have a bound spirit at your command. Gives new meaning to the term bidding, doesn’t it?

Here is the item’s physical description: “This box does appear to be a dybbuk box as it is sealed with wax as is known to be done. It measures 11 1/2″ wide, 12 1/2″ tall, 4 1/2″ thick approximately. It is of old weathered wood with leather hinges.” No reason is given for the myriad of symbols covering each of its sides. However, after presenting a haunting tale of activity that only occurs within the box’s vicinity, she ends with the disclaimer—as per Ebay policy—stating that it is being sold as “an oddity art object ONLY!!!!” 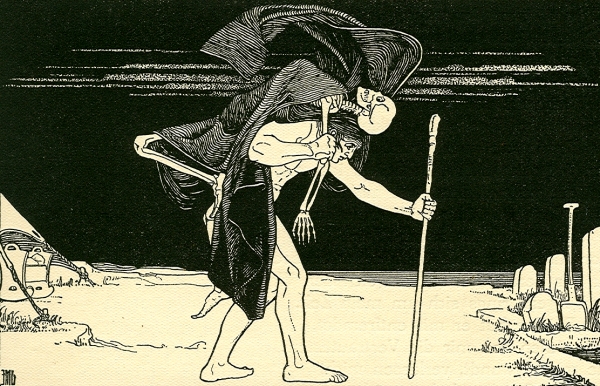 After viewing the photos, I found my own reaction perplexing. Curiously, I stopped myself just before I logged in to place a bid. I read the seller’s claim: “I’ve sat and stared at it a while. Pondered this box for hours. It seems to make me want to open it. To resist temptation, I offer up this unique piece of unknown scary business for auction.” I told my daughter of my own compulsion, and she echoed the feeling of being drawn to the thing.

Being a fan of all things paranormal we’re familiar with movies like The Oculus, so we’re aware of the risks involved in purchasing evil things. We know of the spirit world’s version of the “you break it; you buy it” policy. You can’t unrub the genie lamp. Likewise, Joe Hill’s novel Heart-Shaped Box teaches that you can’t unsummon a demon. And no one ever says, “That day I conjured Satan? Best day of my life. No regrets there.” I’ll admit I’m not fond of the idea of housing one in our basement, as the mother was forced to do with The Babadook. What happens if you forget to feed it someday? How does one find a sitter should one need a vacation? Will it require regular walks?

Mythology is filled with such beings. The word cacodemon (which is the Latinized version of an Ancient Greek word that I will not try to spell here) means “evil spirit.” The opposite of this is tychodaimon, agathodemon, or eudaemon, all meaning “good spirits” or, more commonly, “angels.” My point in mentioning this is that the Ancients believed in “angelic” beings, but they called them demons, too. This follows along with the Vedic idea of Asuras, superhuman demigods which could be benevolent (Adityas) or malevolent (Danavas). Oddly enough, all Asuras competed for power with the higher beings known as Devas. These beings are also described as deceptive and mischievous. The trickster god itself takes many forms throughout history: from the Norse Loki, the Hopi Kokopelli, and even one Laverna of Roman lore.

Virgil describes the latter as the craftiest of spirits, “always on earth, among thieves, pickpockets, and panderers.” But when I think of her, I see Laverna stitched across the breast of a waitress uniform, her stiff bouffant bobbing as she emphasizes exasperation towards her overaged son still living with her, the ash of her seventh cigarette of the morning falling from between her twiggy fingers. (Being from the Midwest, I have an actively engaged imagination when it comes to preformed ideas based solely upon names.) In short, I don’t tremble when I hear her name. For me, the threat just isn’t there.

I suppose the possibility of receiving a so-called benevolent demon intrigues me. What if I purchased one that actually enjoyed folding laundry? Suppose my fury had hidden talents. Say its Mediterranean dish rivaled that of Iron Chef Michael Symon’s. Wouldn’t that be worth $100 with free shipping?

You can’t unrub the genie lamp. Likewise, you can’t unsummon a demon. And no one ever says, “That day I conjured Satan? Best day of my life. No regrets there.”

But it is that no-returns policy that keeps my curiosity in check. To illustrate my deeply rooted fear, I offer this anecdote: One of our kittens escaped before winter. After an exhaustive search, my daughters and I gave up hope of ever finding him. When he returned this spring, he was pregnant. We then realized hewas a girl. She chose to give birth in an undisclosed location, forcing us to follow her into a neighbor’s garage, expecting to find her kittens. The house was a rental, but had stood empty for a few months. In a path lit only by a thin flashlight beam, I shuffled my way to an old refrigerator. I assumed it would be filled with tools, as my ex had kept one for that very purpose: to keep his tools fresh. My assumption was wrong. As I opened the door—my eyes adjusting to the harsh light from within—I saw what my eldest daughter later described as a severed human head.

I slammed it shut and told her to get out, quick. In true horror film tradition, I opened the door again and took in the many corpses, all wrapped in grocery sacks. The freezer was full of the same kind of packages, too. Through the plastic, they looked like dead cats to me. However, as I told the story to my husband, out of breath and shaking, he suggested they were raccoons. Apparently, trappers store their catches in refrigeration to keep them from rotting before they can sell them. As he told me this, my eyes widened and my mouth gaped. In my disbelief, I came to realize I was never meant to live amongst these odd creatures known as Midwesterners. (Furthermore, I decline to audition for a role in any of the Sinister sequels or prequels.)

The moral of the story, folks, is this: It’s not worth the winning bid when you realize the demon you thought would be your magical maid is actually a malevolent trickster named Shirley.