Editor’s Note: This month, we’re delighted to introduce Cynthia Manick as our Poet-in-Residence. Before we share her first poem, we bring you a special introduction from our very own Isabella David McCaffrey. Join us next week when Cynthia answers our traditional Take Five questions. —Cami Griep

The night I met Cynthia Manick was one of those misleadingly magical nights that make you fall so in love with New York City you ignore all the problems that come alongside living there: expensive rents, Wall Street clones replacing the city’s unique characters (like Edgar Oliver), all the good, old neighborhood bookstores and record shops closing. (RIP St. Marks Bookshop forever). None of that felt relevant that cold December night. My husband and I snuck away from our newborn son, leaving him in the care of his grandparents for the first time and drove into the city to KGB Bar in the East Village.

Not wanting to be late to hear my friend, editor and poet Safia Jama, my husband dropped me off outside the bar and went to search for parking—another not fun aspect of city living. I still felt doughy—not in physical terms necessarily but fragile in soul and body after giving birth to a ten-pound boy only a few months earlier. New York intimidated me that night as it never had before, but inside the bar I discovered a surprisingly small but cozy space painted in crimson shades and draped in not necessarily ironic golden sickles and hammers. My friend Safia was reading third, so she was thankfully still seated at the table when I arrived, scooting over to make room and introductions all around. Her husband, Vincent Cross, an Irish folksinger whose latest LP was about to come out, was there, with his glasses as askew and his grin as jaunty as ever, and so was Cynthia, a poet whose first book, like mine, was coming out in the new year.

Waiting for the reading to begin, we all fell to discussing the difficulties of titling our new work. Cynthia had the perfect title for hers—Blue Hallelujahs. It was so ideal I almost felt a stab of envy. I don’t love the title of my book. It works if you happen to know The Voices of Women references my thwarted desire to be a character actress—my legit agent pushed me to find a marketable niche instead, but without the backstory it sounds vague. Vincent hadn’t named his new record yet but was toying with Old Songs for Modern Folk—the title he settled on later.

“You know what it reminds me of, actually,” I said, thinking of my recent childbirth experience. “It’s a little like naming a child. You have to find the name that feels right and not care what the world thinks.”

“You ought to put that in a story,” Vincent said in that warm, lilting half-brogue of his, only slightly flattened by years in Brooklyn, and I knew I would.

Finally, the poets took the stage—or the podium in a less dark corner of the bar. Safia, when it was her turn, dazzled me with her presence and poise. It’s always exciting to see a new aspect of an old friend, and it made me determined not to forget to look up Cynthia’s work, although pregnancy had left my brain a sieve.

Maybe I wanted to keep that night alive in my head, because I didn’t forget. Conversation can be an art form, too, and there can’t be a more delightful conversation than the one we all had on that cold winter night in a warm, red room, discussing music, books, poetry, and life.

Later, what I found in Cynthia’s work dazzled me as well. While, in real life, Cynthia was charming and funny, her work was also emotionally honest, masterfully complex in its simplicity, and with, as Cynthia put it in one of her interviews, quoting a favorite teacher, “Details that stick in the teeth.” That night and its details stuck with me, too, despite the sieve my memory has become, and I’m so glad it did. I can’t wait to have as equally magical an evening reading her new book as I did that night I had the luck to meet her in the flesh. —Isabella David McCaffrey

Revolution Staccato in B

One thousand saxophones infiltrate the city,
two by two and each with a pulse of its own.

Some have bodies big as elephant ears
and heavy-lipped missiles shoot from their pitch.

Others take the long way down.
Sopranos drop octaves along the banks,

making concave grooves settle into the click
of thigh bones and cypress knees.

They leave behind G scales in the grass,
mounds full of girls mouthing yes yes.

The altos want to turn New Orleans red
play Summertime in the streets,

have it gulp into bellies like ribs swathed
in barbeque, liberate bodies from inside out.

They all want night to end full, to riff reeds
on every corner, every concert hall,

have it settle like gold dust from clit to clavicle.
Watch them turn the city into a panama of sound,

a house of blues, until it swells like an open mouth
and babies are scatting in their sleep.

“Revolution Staccato in B” originally appeared in Callaloo. 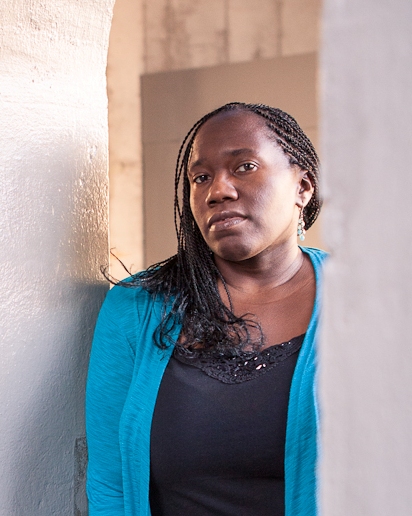 Cynthia Manickis the author of Blue Hallelujahs, published by Black Lawrence Press. A Pushcart Prize nominated poet with a MFA in Creative Writing from the New School, she has received fellowships from Cave Canem, the Callaloo Creative Writing Workshop, Fine Arts Work Center, the Hambidge Center for the Creative Arts & Sciences, Hedgebrook, Poets House, and the Vermont Studio Center. She was also a 2014 finalist for the New York Foundation of Arts Fellowship in Poetry. Manick serves as East Coast Editor of the independent press Jamii Publishing and is Founder of the reading series Soul Sister Revue. Select poems have been performed by Emotive Fruition, a performance series in NYC where actors bring life page poetry for the stage; and is currently being developed by Motionpoems, an organization dedicated to video poetry. Her work has appeared in the 2016 Argos Books Poetry Calendar, African American Review, Bone Bouquet, Callaloo, Human Equity Through Art (HEArt), Fjords Review, Kweli Journal, Muzzle Magazine, Pedestal Magazine, St. Ann’s Review, Sou’wester, Tidal Basin Review, and elsewhere. She currently resides in Brooklyn, New York.