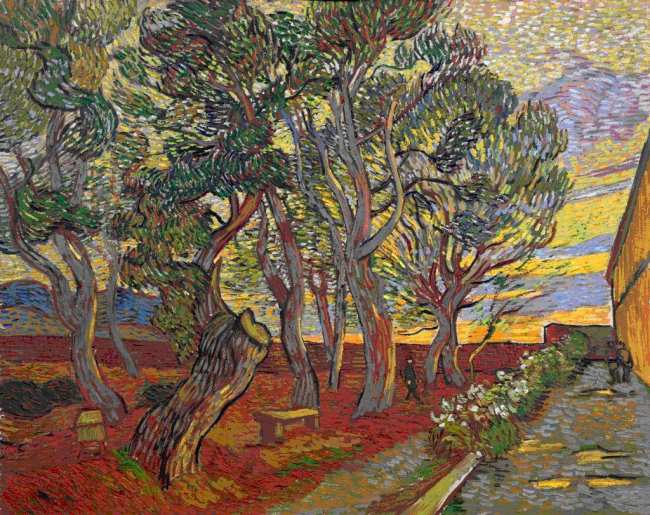 One chilly Saturday Den goes with her mother to the Botanical Gardens. Den wants to walk in the part with the wizened tree trunks, where the grass sprouts up in clumps. Where the earth is more like grit. Once she had seen a whole ants’ nest there.

But her mother looks up at the sky. She thinks it’s going to rain. And she needs a cup of coffee in any case, she says. She asks Den: “Wouldn’t you like to have a yum-yum?” Den says she would. And she would, except that her mouth has gone funny; her spit feels dirty. It’s because she’s remembering what she once did. She ate an ant.

Her mother says it’s too cold for the wild side just at present. The day is too windy, plus it’s been raining. There’s bound to be mud everywhere.

So they go to the cafeteria. Den looks out for the lady with the little girl they’d met during the summer. Mori, the girl was called. She can’t remember the name of the lady. Her mother had invited them to tea but they hadn’t come. She’s only seen them that once. Maybe they’ve gone away somewhere. Den pictures them evaporating in a swirl of sand. A sandy somewhere far from here.

They find a table by the windows and look out. From where they’re sitting you can see the green fish at the centre of the fountain, raindrops already splattering against its mottled head. Where does the fish-water come from? Den wonders. It keeps on spurting out of the open mouth as though there is an endless supply.

The sky has turned a dense blue-grey colour. It’s all gone dark and still. A storm is brewing. Den loves a storm. Then there’s a sudden roll of thunder. She hopes there’ll be more than just the one.

A yellow flash in the sky highlights the ornamental fish.

“Where does the fish water come from?” Den asks, her eyes fixed on the continuous stream of water pouring from its open mouth.

Her mother is distracted, drinking her coffee. “Sorry?” she says staring at the trickling rain against the window glass.

“The water that comes out of the mouth of the fish. How does it get into the fish in the first place?”

“Oh,” her mother murmurs. “There’s a mechanism inside.”

Den thinks about this. It doesn’t really answer her question. She tries another:

“Where does the water go?”

“Into the pond,” her mother’s distant voice drones back.

Den is ready for this one and has a third question waiting:

“Why doesn’t the pond overflow?”

Her mother stops with her coffee cup mid-way to her lips as another clap of thunder hits the air and the world goes darker still.

“I am trying to relax,” she tells her daughter. “Can we have a bit of peace and quiet.”

The ant nest was on the side of a hillock. It glistened like a wound. The sun shone. Den had stared at this bronze-gold heap and saw that it was a moving thing. Her mother called it a nest but really it was no such thing. It was the ants themselves. All the ants.

She was standing on the path near the ant nest waiting for her mother. Whole lines of ants were marching across just in front of her feet. Marching was the right word to use for ants. They were moving in two straight lines, one going to and the other away from their city. Den had a long knobbly twig in her hand. She was making out she was a traveler in ancient times and thought of the twig as a staff. Back in the present her mother had gone to the toilet behind the bushes, out of sight, calling it “toilet” even though the area was only spread with dust and leaves. Maybe “toilet” meant what you did, not where you went to do it. Her mother said it was ok to go to the toilet in this part of the botanical gardens, because it was only the wild and nobody would be likely to come along. And she’d added it wasn’t dirty to go to the toilet here because what came out of you was natural and would just blend in with the earth. Then she had gone to do a wee. Only a wee. Her mother was not someone who would do a poo behind bushes. For she was too polite to do any such thing.

Den stayed where she was, alone on the path. Suddenly a strange feeling had flooded into her. She wanted to know what an ant tasted like and she knew she was about to taste one. She entered into the part of the traveler in ancient times as thoroughly as she could because to her mind they would have found it quite normal to eat an ant. They probably captured ants and ate them every single day. Then she caught an ant on the end of her little walking stick and squished it into the path. It was surprisingly easy to do this. Surprisingly easy to kill. No one came forward and stopped her at the last minute. No voice inside her head told her off. She lifted up the twig and looked underneath. Her heart went fast and furious as she examined the chocolatey brown mess which was stuck to the bottom of her twig. She wondered if it would taste like chocolate. She licked it. The taste was sweet. Not the same sweet as chocolate though. Most probably it was not such a nice sweetness as that. Den thought of the words honey-blood. It was good to taste honey but bad to taste blood. Blood and honey. Honey-blood.

“They didn’t have any yum-yums today,” Den’s mother says, lifting up a plate from the tray and passing it over. “I got you a Bakewell tart.”

It is easy eating the cherry. Then Den gnaws at the white icing with her two front teeth.

“Why don’t you eat it properly?” her mother wants to know.

Through the scored lines she has ground into the icing, Den can see the dark lumpy interior. The sight doesn’t please her. She knows she won’t be able to eat any more of the thing. Oozy and mushy and bitty. It looks like the insides of an ant.

“Oh really.” Her mother’s voice is exasperated as she stares at the mutilated cake.

“I felt sick all of a sudden. I don’t really like it,” Den tells her, covering the remains of the pastry with a paper napkin and pushing the plate far away to the other side of the table.

Looking out of the window she sees the world has turned to normal again. There’s a sheen on the grass but other than that it’s as though no recent storm had taken place. She knows the rain has sunk into the ground and will turn into mist and rise up into the sky and then turn into rain again.

“It’s just like living in the middle of a circle,” Den says. The idea consoles her. Nothing really dies. Nature just keeps on going round and round and round. In moisture; in a swirl of sand. She puts up her hand and traces a finger through the air in loops.

Her mother lets out a sigh and carries on with drinking her coffee.

Jay Merill is published or forthcoming in 3 AM Magazine, Crack the Spine, Epiphany, Hobart, The Irish Literary Review, SmokeLong Quarterly, Wigleaf, and elsewhere. Winner of the Salt Short Story Prize, Jay has two short story collections published by Salt, God of the Pigeons and Astral Bodies. She lives in London and is Writer in Residence at Women in Publishing.