Bryan with a Y 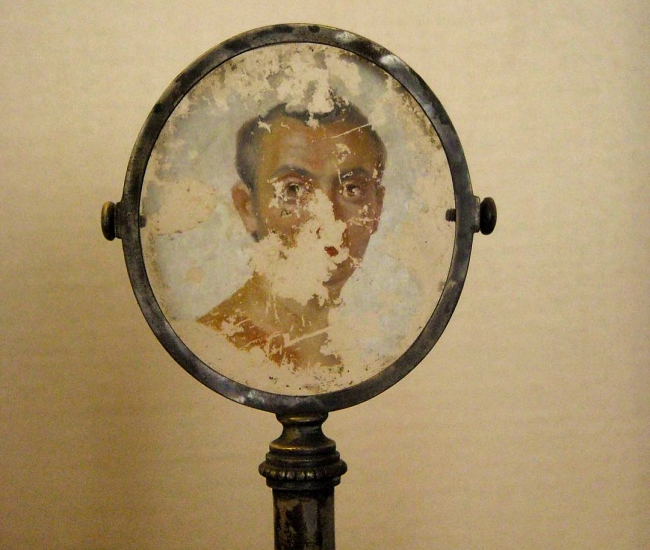 “Portrait of a Man on Glass,” from Pompeii, 1st century A.D.

Riding high on cardio endorphins, I spot Bryan with a Y standing tall at the top of the stairs, sporting the crimson-colored basketball shorts and the gray All For One t-shirt I bought for him during a boys-only weekend trip to Boston five months, three weeks, and two days ago tomorrow. When we make eye contact, he turns around and takes the stairs while I lunge forward, mister quads and delts leaping over YMCA-stickered stationary bikes, treadmills, and free weights. Acquaintances and friends both ask, “Dude, what’s the hurry?” Like in Zumba class, I try to ignore the noise. At the bottom of the stairs, I yell out his name, trying to box him into a fluorescent corner with nowhere to turn but straight into me.

He stops and turns around. “Cheating on Gold’s Gym now, too, I see.” His tone bites. Like venom. And fury. I can’t blame him. When did he color his hair? When did he pierce both ears? When did he stop wanting me and my heart?

“Gold’s Gym understands me.” I touch his shoulder, wishing to touch everything else. Now. Here. Out in the open. Who the fuck cares.

“Someone should tell him what a futile effort that is.”

“I think he already knows.” I smile. He used to say my smile soothed his unhappiness.

“Not as much as I used to. Trying out a few new things. You know, mix it up a little.”

“I have no doubt. I gotta go. But take care of yourself, okay.”

“Wait.” Months of unanswered questions grab his wrist. “Give me a minute.” I release the grip. “Please.”

He leans against the wall, lips as kissable as they are full. “You have one minute. Go.”

I widen my stance. “Nobody here cares what we’re talking about.”

“So you’re out now.” He crosses his arms. “Free from all the ladies and the lies.”

I offer a hand. A peace offering. “I’m sorry if I hurt you.”

“Don’t touch me.” He taps the back of his head against the wall, the same action he made in Boston, in the hotel room, after I said I wasn’t in love with him, that I couldn’t pick him, that I didn’t want birthday’s and holidays and Gold’s Gym and vows and fidelity and reliability, that

I’m not the man he needs. Or deserves.

His eyes and shoulders soften, luring me back to steamy showers, matching Red Sox baseball hats, Drag Race, sex—so much sex—and Maxi, our three-hundred dollar poodle he bought for me on our three month anniversary. “How’s little Maxi doing?”

“He ran away after you moved your stuff from the house. I made a few signs but nobody called, so like I had to do with you, I let him go.”

“You should have called me. I could have helped look.”

“It’s kind of hard to call a blocked number.”

“You have my work number.”

“I’m not calling you at work.” He scoffs. “You and all your goddamn secrets. Don’t call me until nine-thirty. Don’t stand so close. Don’t sit beside me. Don’t touch me in public. Don’t play with my hair.” His eyes turn glossy. “Don’t say you care. Don’t say you love.”

“In,” he whispers. “That’s all you care about.” His magic fingers slide down a vein-stemmed neck and magnanimous chest. “I should hate you,” he says. “But I don’t. Because there’s nothing I could do to you that’s worse than what you do to yourself.”

“I see you’re wearing your wedding ring again.” He wipes his eyes, bedroom blues that haunt my wildest and wettest dreams. “Always pretending to be something you’re not.”

A tear falls from his chin. “If you say so.”

“I’m just trying to be honest.”

“Honesty isn’t lying. Not to yourself. Not to me. Not to her. Not to anyone. You don’t have to stay married if you don’t want to. That you can change. That you can do. Now leave me the fuck alone.” He takes the stairwell one and one, leaving me to marinate in my own secrets and lies, along with a question I ask myself innumerable times a day: how many steps does it take to live an honest life?

At the top of the stairs, I hear my other name, the one I first heard three years ago at the breakfast table: Pupa with a U. I turn around and see my green eyes and pointy nose and my wife Susan’s curly red hair on a precious little boy, Tommi Hunter Jr., dripping wet and waving a flimsy piece of paper in the air. “I did it, Pupa.” He jumps up and down. “I swam the pool back and forth twice. They gave me two gold stars. See?”

I wiggle my tongue, because he loves me silly, and award a hearty two thumbs up before waving him back to his mother who’s no doubt beaming with pride and ticked off with me for missing another family milestone, which I have, she’s right, I’m always one or two steps behind. He bounces away, unaware of the power he holds over me. I turn and nod at Bryan, running fast into a glistening sweat. One final acknowledgement of what was and what will never be. He doesn’t respond. Nothing. Kaput. Zilch. And I know how we met is why we must end.

I spot a mat in the stretch and bend area where a large woman is sprawled flat on her back, as if posing for some crime scene investigator to white-tape her outline. “It doesn’t get a whole lot easier,” I say. “But we can’t give up, now, can we?” She stands, shakes her head, and limps to the water cooler.

Catching me off guard, my everyday life walks toward me, confining me to the straight and narrow facade they expect and need me to be. Susan waddles like a duck, resting her hands on a distended belly that’ll soon produce Ashleigh Rae, another reason why I had to walk out and close the door on Bryan. And the many men before and after him. Hunter bounces around the walking track, ignoring Susan’s pleas to come back, to get over here, to obey and stand still. She’s right, he and I are very much alike.

Suddenly, I’m struck with a moment of clarity. Which rarely happens. Perhaps I fell for the wrong man. Perhaps Jason, the human resources hottie at work who’s always asking me to lunch, is better equipped to accept the limitations of my situation. Perhaps he can treat with casual contact my terminal ailments. Perhaps he can adapt to my responsibilities and not beg to become the highest priority. Perhaps he hates Boston and little dogs. Perhaps he’s also married to a woman. Perhaps he can save me and I can save him. Perhaps, if I’m lucky, he can help erase the uselessness of still being in love with, and without, Bryan with a Y.

Samuel Cole lives in Woodbury, MN, where he finds work in special event/development management. He’s a poet, flash fiction geek, and political essayist enthusiast. His work has appeared in many literary journals, and his first poetry collection, Bereft and the Same-Sex Heart, was published in October 2016 by Pski’s Porch Publishing. His second book, Bloodwork, a collection of short stories, will be published in May/June 2017. He is also an award-winning card maker and scrapbooker.