Build a bridge, or build a wall? 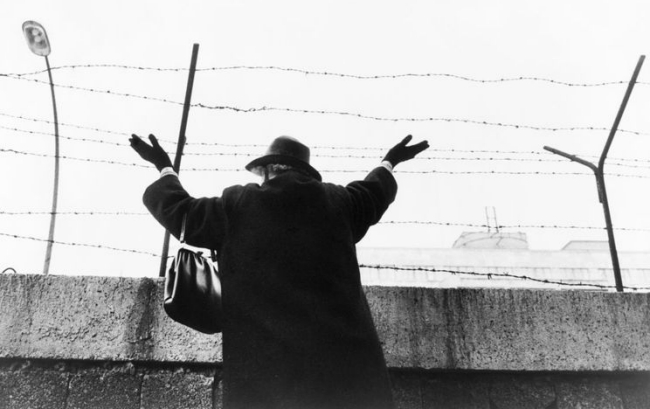 “Waving Over the Berlin Wall,” photograph by Dan Budnik, 1961.

On the second dawn of the Age of Regression, I am still struggling with a friend’s suggestion that now is the time for me to “build bridges to the people who voted for Trump.”

They feel forgotten. Left behind. Unheard. Their election of Trump was not, he said, a vote for misogyny or racism or trickle-down. It was a scream of frustration with the Establishment.

In theory, I should be eager to reach out to these downtrodden rural Americans, to hear their story, to extend an olive branch and really understand why they hurt so much that they could elect a narcissistic con man who is no more qualified to be President than I am.

But I won’t. The people who voted for Trump spent the last eight years fighting progress tooth and nail. They never wanted a black President, and when they got one they rejected him. They rejected his ideas and his attempts at collaboration and his compromises. They rejected diversification then, and the election of Trump is their crowning victory in this fight they’ve waged for eight years.

I read a great opinion piece on America’s problem with women today in the New York Times. Then I read the first comment, which essentially said that liberals like me have it all wrong. The comment included this:

American (sic) are for the most part practical common sense people. We welcome the idea of a multi-cultural melting pot, and we welcome the best ideas other cultures have to offer.

Sounds great, and it’s entirely true. Up to a point.

Middle America, the salt of the Earth, the practical common sense people who work their land and don’t want government interference … these people, they do welcome diversity. But they welcome it like they welcome it in their television and movies.

Diversity is welcome as long as it’s a secondary character in the white male narrative.

Diversity is welcome as a witty sidekick, or as a friend there always ready to lend a hand.

Diversity is welcome as a vehicle for allegory, a way for the white main character to learn something.

Diversity is welcome as a provider of ideas and cultural curiosity.

But diversity is not welcome as an equal. Not in middle America. Not where practical common sense Trump voters work the land and decry government interference.

I can already feel the hashtags swelling up: #NotAllTrumpVoters, #NotAllWhites, #NotAllMen.

But you’ll get no sympathy from me. If you voted for Trump, you didn’t just scream in frustration about an economic malaise covering rural America. You didn’t just protest against a societal trend of liberals forcing you to change your ways of life. You were never really that concerned about emails or charitable foundations.

Build a bridge? That’s not worth my time because you don’t want a bridge. You want a wall. I’m just trying to decide if I should spend the next four years trying to tear down your wall, or helping you build it higher and thicker from this side.

Peter Dudley’s most recent novel, Freda, is the third and final installment in his “New Eden” YA post apocalyptic sci-fi series. Peter runs the nation’s top employee giving campaign, which raised $70 million for charity in 2015.