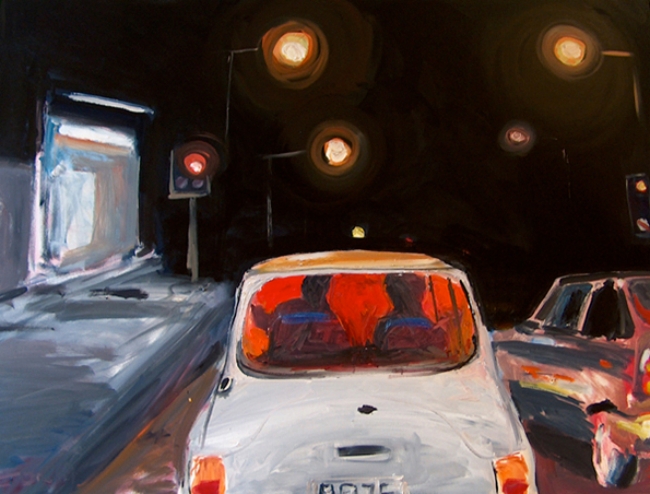 “Traffic,” oil on canvas, by Jessica Brilli, 2006. Used with permission.

When I pass the large, green sign on the New York State Thruway that says “Leatherstocking Region,” I know I am halfway. I am in between my two homes, my two selves. I am in between the first part of my life and the second.

Usually around this point, I make some sort of clever joke about the area I’m in and tweet it out. I know I shouldn’t text and drive. I have one friend who usually responds. Actually, I don’t know if we really even qualify as “friends.” But in this strange not-world, I know that he will tweet back at me about borrowing some leather stockings.

I’ve gotten very good at the roughly seven-and-a-half hour run from Buffalo, NY to Long Island. If there’s no traffic getting from my apartment to the 90, if there aren’t any closures from construction around Syracuse, if there isn’t any flooding in the Hudson Valley, if there isn’t a Yankee game starting or a Mets game ending, I can make it in seven hours exactly. I know all of the markers and checkpoints. I know where to stop for the cheapest gas and which rest stops have the cleanest bathrooms. I’m attune to the tell-tale signs of a state trooper lurking in the distance. I have all of my mixed CDs set up in the 6-disc changer: the ones that I sing along to, the ones that I just hum with and the ones that overcome me with waves of nostalgia.

Even with all my experience, it is here in the Leatherstocking Region that I always begin to have trouble. I become aware of how long I’ve been sitting, and that the landscape hasn’t changed in almost one hundred miles. It’s here, halfway through the trip, when I have no choice but to allow my mind to have its say. The inner workings of my brain have been patiently riding shotgun, never once turning down the stereo or asking for more air conditioning. My subconscious has waited nearly four hours to have its turn, and the time has finally come.

On a solo car ride across the state of New York, my car is full. In the backseat are more people than I have seat belts for. My mother, who is wearing a hat that is too small for her head, and my father are trying to balance a checkbook with an abacus and slay a dragon with nothing more than a cheese grater and a small bag of miracle grow. My Grandmother is babbling incoherently, but every once in a while I realize the babbling isn’t really incoherent: it’s the plot line of every book I’ve ever read all strung together.

My roommates are trying to fold a fitted sheet, but can’t agree on how to go about it, or whose sheet it actually is. Leaning forward to whisper incorrect directions to me is my boss, who doesn’t seem to realize that she’s far better at driving than she is at steering other people along the road. Her face is quickly obscured by a tremendous seating chart, being held up by two of my best friends, one of whom is getting married soon. They’re discussing where to seat the President and what the diplomatic ramifications were of seating Netanyahu by Jintao. Their voices were drowned out by a group of about seven kids my own age, many of whom are stoned and singing New Found Glory songs at the top of their lungs, before falling all over one another in fits of laughter.

Their bodies twist and morph into a deep and blue ocean which swells into a wave and threatens to crash over the front seat. But instead, the crest encircles itself, becoming a full moon and beams in from my sun roof. A cloud dances before it and becomes a bird, which glides effortlessly down into my car and perches itself in the back window, just behind the head of someone I almost gave my heart to. He tilts his head to one side, and his hair falls, becoming a thick red stage curtain, just beyond which I can hear voices. A college professor of mine is calling places and feet start to shuffle to their mark.

The footsteps grow louder and I hear a knock on my bedroom door. A voice calls out a hello, pitchy and mimicked, like she’s been sent from housekeeping. She has a laugh that comes from her ankles and hair that’s morphing away from the red her license claims to be. She’s accompanied by a girl who isn’t a girl, but a series of postcards and phone calls, a friendship that morphs and twists and grows and dies and grows again like leaves in the window.

An orange and red leaf blows in an open window and settles upon my hip where it spreads and takes the shape of a baby that cries and reaches out into the distance for a hand that isn’t there.

An orange and red leaf blows in an open window and settles upon my hip where it spreads and takes the shape of a baby that cries and reaches out into the distance for a hand that isn’t there. I can feel my face flush and burn as I feel a hand reach from behind and gently graze my hip before settling a finger in my belt look. But it’s not a finger, it’s a snake, and it bites me just above my left breast and I’m bleeding all over the front seat. Now a cold sweat has broken out across my forehead and I gasp for air. My heart begins to slow and my face grows pale just before I look over to the passenger seat for help. And there she is.

She’s heavier than I am now, and her hair is longer and more brown than mine. I like her glasses. She’s wearing a clear plastic heart with another smaller, red heart inside it on a chain. She’s got more tattoos than I have. It looks like there’s a scar on her throat. Now she’s made eye contact with me, her face solemn. She looks tired.

“It’s going to get worse before it gets better,” she tells me. She reaches out her hand and sticks it straight into the bleeding wound on my chest and grabs hold of my heart. I’ve still got both hands on the steering wheel, but I’m sure I’ve taken my last breath.

“This is safe.” My heart begins to beat again. When I look down, the wound and the blood are gone. I look back up at her as she turns to face the road.

I open my mouth to say who the hell knows what, but instinct kicks in as I realize I’m following too close to the truck in front of me and I hit the breaks. Slowing down, I put my left blinker on, check my side view mirror, and pass. As I move back into the right-hand lane, I see another big, green sign. This one welcomes me to the Capitol Region—Albany. The car is quiet now, all the seats empty except mine. And I’m not sure how I got here at all.

Jordan Rizzieri is the 90’s-loving, extremely tall founder of The Rain, Party, & Disaster Society. She was raised in the center of Long Island, NY to love Alice Hoffman and Billy Joel. After completing her B.A. in Theatre Arts at SUNY Fredonia, J tumbled aimlessly around the state of New York until 2015 sent her the way of the US capitol. Now she splits her daylight hours as a respectable freelance writer and editor, while at night she takes on the identity of pro wrestling’s sassiest critic, The Lady J.