And It Still Hurts: Why Even Minor Childhood Wounds Still Ache

For most of us, the friends we make growing up are a significant part of the essential fabric of our childhood memories.

One of my childhood friendships continued throughout grade school, high school and even university. We don’t interact much now, except minimally through Facebook, mostly because we live continents apart. But I still consider her a friend, in that special way that some childhood bonds seem to endure.

As opposites sometime attract, we were, in some respects, quite different. I was an only child. She was from a large family. That, in itself, made our lives very dissimilar.

She was a really good person—that deep-down, genuine, wholesome kind of good—and from what I can tell, she still is. That kind of good just persists. She was kind and nurturing, even as a child. She tried to make me feel better about her mother not liking me.

I won’t name her here, to protect her privacy. I’ll simply call her Childhood Friend. But if she reads this, she will probably know it’s her.

The problem? Her mother didn’t like me. I mean really didn’t like me. And I knew it right from the start. I could feel it. And it was (ahem … still is) distressing and painful.

I remember once, at a Girl Scout meeting, I overheard her tell another mother that I was a “spoiled brat.” I remember feeling like I had been hit in the stomach. I had never heard anyone speak about me that way. I was stunned. I was humiliated. I was hurt. I wondered if she was right.

I was the kind of child that was used to adults liking me. I was quiet and typically compliant. I wanted to please adults. Teachers liked me. But, by some mystery of relationship chemistry, I seemed to grate on the nerves of Childhood Friend’s mother. I felt it every time we were in the same room, and I wanted to change that.

The thing is, she was the kind of adult who really liked kids. But not me. So I tried even harder to make her like me. And, as those ill-fated endeavors typically turn out, it backfired … epically. Like the time at Childhood Friend’s birthday party when I stepped in dog poo right before getting into her car to head to the local bowling alley, where I then proceeded to pitch the bowling ball down the lane at the precise moment when the pin re-setter was coming down. I swear these were innocent mistakes. Nonetheless, they did not help my campaign to be liked. Perhaps I was trying too hard.

After several failed attempts, I mostly just tried to stay out of her way.

Now, this certainly does not rank up there with the most serious of childhood traumas. It’s almost laughable compared to the wounds some children endure. It seems silly to even remember it so many years later.

In 1943 psychologist Abraham Maslow first published his paper “A Theory of Human Motivation” in the scientific journal Psychological Review, where he proposed the now-classic Hierarchy of Needs to explain the pecking order of incentives that drive human behavior. At its core were the basic Physiological needs (i.e., air, food, water, sleep) and Safety needs (ranging from health and a secure environment to practical issues of economic security) necessary for human survival. Maslow theorized that these fundamental drives, which he called deficiency needs, strongly motivate human behavior, most predominately if they remained unmet. Once these needs are met, however, they cease to be a prime motivator of human behavior. In short, when you are full, you are no longer motivated by hunger.

In Maslow’s words, “It is quite true that man lives by bread alone—when there is no bread. But what happens to man’s desires when there is plenty of bread and when his belly is chronically filled? At once other (and ‘higher’) needs emerge and these, rather than physiological hungers, dominate the organism.” 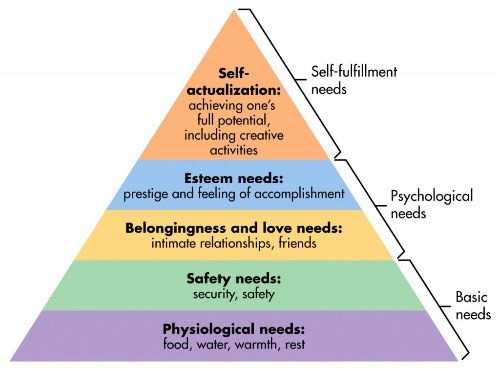 Moving up the pyramid from these fundamental needs, the third level represents social needs that Maslow labeled Love and Belongingness. Based on their placement, he considered these interpersonal needs some of the strongest psychological motivators of human behavior. Furthermore, unlike the aforementioned deficiency needs, these continue to drive behavior, and may even become stronger, even as they are being fulfilled. This desire for acceptance, attachment and connection is especially strong in childhood and can rival the need for safety, as we see with children who cling to abusive parents.

However, there is one very important difference. Research has also shown that we relive rejection and emotional pain more specifically and more vividly than physical pain. When we conjure up memories of physical pain, we may remember the incident and/or circumstances, but we don’t really re-experience that pain. The same is not true for the emotional pain of rejection. Studies show that remembering emotional pain can bring up the same feelings, many times to the same degree, as when we initially experienced them. We can relive the hurt again and again.

The thing we don’t often realize is that another person’s actions, even their actions toward us, are not always all about us. Most of the time, their rejection of us says much more about them than it does about us. It just doesn’t feel that way.

Among the many compounding effects of experiencing (or re-experiencing) emotional pain, and specifically social rejection, researchers have found affective and cognitive consequences, including increases in anger, anxiety, depression, jealousy, aggression and sadness, as well as decreases in the performance of difficult intellectual tasks, short term memory, decision making and impulse control.

Rejection is literally and physiologically painful. It’s why people often report the pain as akin to “being stabbed in the heart” or “punched in the gut.”

Unfortunately, rejection from others often leads to self-doubt and self-criticism. We tend to kick ourselves when we are down. Often this turns into a slippery slope. Replaying the painful events in our heads only serves to reinforce social anxiety and fear of disapproval. So we ruminate about it more and we try harder and our growing fear and anxiety cause us to act in ways that are counterproductive and increase the chances of disapproval reoccurring—like my dog poo incident.

Physically speaking, rejection contributes to poor sleep quality and reduced functioning of the immune system. All in all, a pretty daunting package. No wonder we try so hard to be accepted.

Experiments have further shown that even relatively trivial instances of rejection result in reports of sharp emotional pain, mood swings and decreased self-esteem. Indeed, psychologists conclude that what separates rejection from almost every other negative emotion we encounter in life is the relative magnitude of the pain it elicits. More chronic, long-term or emotionally significant rejection can result in more severe consequences, including depression, self-mutilation, suicide and substance abuse.

So think twice about even that minor critical glance or social media snub. It could have more of an effect on someone than you know.

And hey, Dear Childhood Friend, thank you for liking me even though your Mom did not … and can you please tell her I turned out to be a good person?